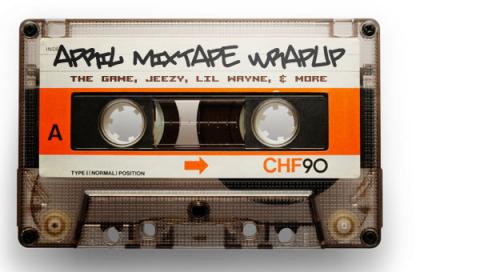 Big K.R.I.T.’s new project K.R.I.T. Wuz Here doesn’t belong in Mixtape WrapUp. This is a full-length album that will likely go down as one of the best of 2010. This Mississippi-bred emcee/producer flaunts a rhyme style that sounds like a hybrid of T.I. and Pimp C, and a production style that’s as fresh as it is familiar. K.R.I.T. ambidextrously switches between lyrics about southern food and women (“Country Shit”), the struggles and joys on the way to success (“Hometown Hero,” “Neva Go Back”), and more. As a producer, he has a tendency to rely on keys and samples to breathe soul into his beats, but songs like the opening “Return of 4Eva” show that he can craft high-octane backdrops just as skillfully. If the rest of K.R.I.T.’s catalog is as solid as this, Mississippi—and the south as a whole—is in great hands.

Rhymefest’s album El Che has been delayed for years, but pushbacks aside, there’s one thing you can’t fault the Chicago lyricist for: he’s released plenty of dope music to try holding fans over in the meantime. His new mixtape with RubyHornet.com’s DJ RTC, Dangerous: 5-18 is no exception. ‘Fest doesn’t seem concerned with saving the good stuff for El Che, and that’s clear with the front-to-back potency of 5-18. “Martyr” describes the sacrifices that come with standing up for music and ideas that you believe in, and “Letter” sees Fest maintaining relationships with friends in the states while traveling around the world. The whole tape isn’t super serious, though: he has fun with Rahzel and Large Professor on the light-hearted “Bad Self,” and the pulsating bass of “Vibin” makes it surprisingly party-ready. Dangerous: 5-18 is another worthwhile effort from Rhymefest, and although El Che subsequently delayed from May 18th, Rhymefest remains one of the top mixtape-makers of the ’00s.

As much as predictability is chastised in Rap, it often has its advantages. While experimentation can fall flat because of a lack of focus, there’s something fulfilling when an emcee can find his/her lane and navigate it smoothly throughout an entire project. Kush & Orange Juice features Pittsburgh prince Wiz Khalifa showcasing the cruise control of a seasoned vet. With robust, laid-back soundbeds backing him, the Taylor Gang honcho waxes poetic about women, weed and winning with a confident delivery. And aside from less than a handful of cameos, he handles all of this by his lonesome—cosigns aren’t necessary. Highlights include “Up,” “The Statement,” and the bars-heavy “Glass House” with Curren$y and Big K.R.I.T.

Between his former G-Unit membership and his alliances with new and old Rap heads, Game knows that there’s strength in numbers. So after starting The Red Room with “400 Bars”

of his own, he makes a point to put on new blood (no pun intended) while fostering his relationships with other established acts. Reuniting with DJ Skee for this tape, “The Professionals” showcases Game’s natural chemistry with his crew of Menace, Maad Maxx, and Kanary Diamonds, and seeing him trade bars with bubbling DXnext’er Nipsey Hussle on “Ha Ha” truly puts Game’s burgeoning veteran status into perspective. Another highlight includes “Gangs Of New York,” which calls upon Jadakiss and Jim Jones for what sounds like a gutter, updated version of Ja Rule’s “New York” from years ago. While it’s mildly disappointing that Game doesn’t go solo for more of the tape, he thankfully doesn’t get lost in the shuffle—he makes his presence felt on every track, and he builds anticipation for this year’s R.E.D.

The Palmdale, California trio of Likewise, Mibbs and BeYoung takes home another victory with their Don’t Mention It mixtape. The DXnext crew does the same things that have garnered their loyalist fan base and media accolades: melodic and bass-heavy backdrops ready for the whip and parties, in-the-pocket flows, and identifiable subject matter. “Birds” comically clowns subpar women, the sample-based “Overcome” talks about tackling adversity, and “Waves At The Prom” reminisces childhood. Pac Div fans may be upset that their Universal debut Grown Man Syndrome hasn’t dropped yet, but with mixtapes like this and the previous Church League Champions

Young Jeezy’s first Trap Or Die was a game changer: with DJ Drama’s heavy co-sign, a selction of hard-hitting instrumentals and his own anthem-ready rhymes, it established the former Boyz N Da Hood member as a true solo force before his career really took flight. The sequel is hosted by Don Cannon instead, but otherwise, it picks up right where its predecessor left off.  The beats still bang, and Jeezy continues to wreck shop with his menacing mic presence and catchy, gritty rhymes. Songs like “Problem” and “Stop Playin With Me” show that this combination is enough for the tape to hold its own weight, but cameos by Trick Daddy, Scarface, Bun B and Clipse (on the flawless “ILL’IN”) and satisfy as well. Three albums and two seminal mixtapes in, The Snowman still hasn’t lost his touch; and his upcoming TM103 should be no different.

Jadakiss – The Champ Is Here 3

This writer was never a subscriber to Jadakiss’ “Top 5 Dead Or Alive” claims, but truth is truth: the Yonkers emcee can rap his ass off. And a project like The Champ Is Here 3 is the perfect forum to showcase his talents: a momentum-fueled joyride with beats that are uptempo without a party mood, and witty, flow-heavy rhymes. Jada can almost always hold his own, as seen on his freestyle over Biggie’s “Who Shot Ya;” but when tracks like “Top 5 Dead Or Alive” display give-and-go rhymes between Jada and Styles P, and “Soldier Survivors” sees Jadakiss competing for best bars against Nas and Sheek Louch, it’s clear that Jada’s strength comes in numbers. Within a tape hosted by two kingpins of the tape (DJ Drama and DJ Green Lantern), the insipid Nicki Minaj collab “She Likes Me” is a disappointment after the two’s previous chemistry on Minaj’s “Sucka Free” mixtape, but Jada makes up for it by unexpectedly succeeding in his usual obligatory southern pandering on the Yo Gotti-assisted “Here I Go.” While his LPs are often split decisions, Jadakiss’ mixtape game is unquestionable—and with The Champ Is Here 3, his winning streak continues.

White Plains, New York emcee Big Wayde had previous mixtape work alongside DJ Envy and DJ Green Lantern, and even though Herb’n Limelight doesn’t pack the big name cosigns, it’s still got some highlights. Wayde’s husky flow and vivid lyrics are solid throughout, as seen on “MePLUS,” his story of connecting with a woman scorn. But when joined with the top-shelf production and hooks he needs, he’s evern better: “Stoner Untitled” amplifies Wayde’s weeded rhymes with a Bluesy backdrop and a catchy Rich Hill chorus. Wayde’s got the rhyme skills to handle his business, and he’ll be a true force after arming himself with the beats and hooks that he deserves.

For All-Starz & Strapz Vol. 2, MC Eiht doesn’t adopt the new trend of making mixtapes that play like entire albums. Instead, he does exactly what one would expect of an old schooler like him: jack industry beats and flood them with his K.I.S.S. street rhymes. But while using older joints like The Fugees’ “Ready or Not” and Geto Boys’ “Mind Playin Tricks On Me” may not turn heads, he sounds surprisingly fresh and comfortable over newer joints outside of his west coast roots, like Young Jeezy’s “Bury Me A G” and Nas’ “Moment of Silence.” Eiht’s bars are still blunt and to-the-point, and this should quell any questions if he’s still sharp enough for his upcoming Which Way Is West? album executive produced by DJ Premier.

You’ve got to give it to Stat Quo: success in the music industry is largely based on momentum, and the Atlanta emcee’s last label-constructed momentum was in the mid-2000s. But after taking matters into his own hands with leaked music and prior connections with former G-Unit head Sha Money XL, a rejuvenated Stat is garnering new interest and his long-delayed, critically-acclaimed album Statlanta will finally hit shelves next month. 2010’s collection of freestyles and original songs doesn’t show all that Stat has to offer by a long shot, as he’s mostly just rhyming about the usual rap fodder; but his talent is still apparent, and his voice and flow are showstealing even when he isn’t going his hardest. The real gems appear toward the end of the tape: “The Hustle” pairs Stat with a sparse backdrop and a soulfully-sang hook to help him remember fallen soldiers while maintaining his grind, the short and sweet “Story” chronicles a relationship gone way sour, and “The Jungle” mixes survivalist rhymes with a percussive, head-nodding beat from Illtone.