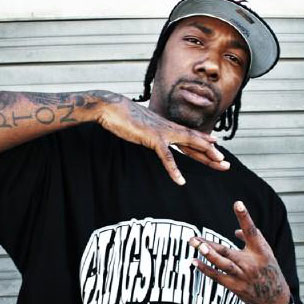 . The duo’s second installment finds the Compton Rap pioneer flexing his concrete raps over classic ’90s production, as a lead-in to his 2010 album, Which Way Is West, paring Eiht with early collaborator DJ Premier as well as Easy Mo Bee and others.

Over three years removed from releasing an album, Eiht explains his reasoning for the hiatus. As a debate cooks up between Ice Cube and younger California emcees, Eiht, the rapper who once released an album titled Veterans Day, explains why the pioneers aren’t so quick to pass torches or microphones.

HipHopDX: Eiht, for a lot of years, you were putting out an album every year. I know this is volume two of All Starz & Strapz, but can you speak about the strategy shift of these mixtapes now gearing towards your next album, Which Was Is West?
MC Eiht: Basically, that’s the thing nowadays. Shit, everybody’s doin’ mixtapes. Basically, me being on a hiatus from music for a couple of years, I’ve been trying to adapt and see what’s been going on with music. I’ve been kickin’ back and listening to what’s been going on with the gimmicky shit. When you’ve got older cats still around, like myself, we’re still fiendin’ for some of that authentic music shit. I just figured it was about time to ease my way back in to get some of this music out.

My thing with [All Starz & Strapz Volume 2] is basically to get people prepared for the album with some of that old school, traditional music. I used a lot of old school tracks, to try and take people down memory lane, and getting ’em used to Eiht, with the younger generation. It’s just something for people to sink their teeth into to get familiarized, and back to recognize what real west coast music is like.

DX: Nik, you’re of one the top deejays on the west. I always believe that true deejays tell stories with their hands. First of all, in the work you guys have done together this year and last year, what does it mean for you to work with an icon like MC Eiht?
Nik Bean: Oh, it’s always a pleasure. It’s satisfying to get some work in with people you grew up listening to. I’ve pretty much worked with everybody I’ve [ever] wanted to work with. So to work with Eiht, or [Tha Dogg Pound], those guys too, it’s so satisfying. Whatever Eiht needs, or any of the O.G.’s, whatever the west coast needs, I got it. It’s nothin’. It’s done.

DX: Looking at Eiht’s unique street perspectives and authenticity, from your younger perspective, what can Hip Hop learn from this man’s music?
Nik Bean: I think Hip Hop can learn a lot from Eiht. People always say that Hip Hop fans are always disloyal. You’ve gotta look at Eiht and others that have a career that spans out so long, and still [maintains] relevance in the game. People still check for him, and check to see what he’s gonna do next and want to hear some new shit from him. I had a gang of people hit me up, like, “When’s the new shit comin’ out?” I already know that people are fiendin’ for the shit. He’s been in the game [24 years]. How many people can say that? Not many.

DX: Twenty-four years Eiht, if I’m not mistaken. What’s exciting about your rhyme-writing at this moment?
MC Eiht: Right now, my rhyme-writing is…I’ve been tryin’ to step it up a little bit, as far as tryin’ to be…I’m still with the storytellin’, but I’m tryin’ not be so much about shoot ’em up, bang-bang. That’s still goin’ on the neighborhoods, we can’t stray away from that. But more so, nowadays, my raps are really geared towards tryin’ to uplift the West. Like you said, I speak for Compton, but when I write rhymes, I try to depict myself as if I’m stuck in the hood in New York or Philadelphia or Chicago – not just Compton. I ain’t tryin’ to depress muthafuckas with, “Life is hard,” and “My homie got killed,” I’m just makin’ songs about niggas who like to sit in the backyard and blow a blunt. We like to go to the clubs, but we ain’t all with the fashion. We ain’t tryin’ to pull up in Rolls Royces. We just regular people that’s tryin’ to make it through the struggle and we want music that we can relate to. At my age, I’m not tryin’ to Jerk. I’m not tryin’ to wear skinny-jeans. I can’t do all that. I can’t compete with the 15 year-olds, so my thing is to try music like back in my parents’ era, when Teddy [Pendergrass] was makin’ his records, or Marvin [Gaye]. I try to adapt to the people that come from my [generation], and anybody else that wants to come along and familiarize.

DX: Eiht, my favorite solo album of yours is Veterans Day. I love that theme, and that was the first time you and I ever crossed paths. Just five months into 2010, your boy Brotha Lynch Hung is back on the charts, the Wu-Tang Clan is doin’ it again, Ice Cube is in the news, Too Short, Dr. Dre…is it a veteran’s day?
MC Eiht: My thing is like this: older cats stood back and tried to give these new niggas they shine, wherever they comin’ from. I ain’t never dissed [the youth]. Niggas got to talkin’ all this “new west” shit. That’s what started fuckin’ up the game. A lot of these new cats was “mixtape, mixtape, mixtape, mixtape, mixtape!” Then they diss on the veterans, ’cause they feel like we don’t want to step aside and give them their shine and their chance. The whole thing about it is, for the last five years, I kicked back and just watched. I ain’t even attempt to try and release a record, ’cause everything was stanky-leg this, lean-back, jump-back, “my belt buckle got 50,000 diamonds in it,” it wasn’t no room for us. That’s not to say that we couldn’t compete, but we were lettin’ a lot of the youngsters dictate the music biz [through] YouTubes, Twitters and all that. Basically, nobody wanted to deal with the veterans. It was a new era. We didn’t diss nobody – the [Ice] Cubes, the [MC] Rens, the Eihts, the whoever’s. Go and get y’all shine on, y’all! We start feelin’ disrespected though, ’cause a lot of these cats didn’t wanna pay homage.

I just got tired of dealing with “new west, new west, new west, new west!” Nobody representin’ the so-called “new west” was doin’ anything. Everybody braggin’ on they albums droppin’, havin’ 30 million dollars… five years later, these niggas ain’t done shit! They hate on us, ’cause when you talk about west coast, people familiarize themselves with a Cube or an Eiht. Now if these cats came along and put some foundation down, it would be no problem to recognize a nigga doin’ his thing. I’m not sayin’ niggas have a problem passin’ the torch, but you’ve gotta be willing and you’ve gotta be earning of that torch. Nobody was worthy of it, so fuck it.

I just felt it was time to get back, ’cause people were starting to go, “Where is the west coast?” So I figured, let me jump back in the game and spit a couple of raps and just get it out there, to see how people would accept it – if we came back, if Eiht or [Compton’s Most Wanted] came back. And all I’ve been hearing is, “Please.” Nobody captures the west coast like the originators. That was my thing.

DX: Nik, you tie to this too. A lot of deejays don’t stand up for the veterans either. One of my favorite things about DJ Drama is how he rides for veteran rappers when it’s time, or J. Period. You do it too. Can you speak on the importance of deejays making that happen as well?
Nik Bean: I take pride in that. Some people have a price. I look at it like it’s not even about the money for me. It’s a balance [of old and new]. I do work with people that I respect – I respect their grind and their music. Definitely O.G.’s on the west coast [influence me], but I do look for new talent. If you do history on what I’ve done, I’ve helped break artists on the west coast. In ’07, I put out that mixtape when Hot Dolla got signed, before actually. He ended up getting a deal with Jermaine Dupri as the first artist signed to Island/Def Jam [of Dupri’s tenure]. Then the [Glasses] Malone tape I put out in ’08 [was] right when he signed to Cash Money [Records]. I definitely take pride in being a taste-maker, like you just mentioned with [Mr.] Silky Slim [too]. That’s the dude that I feel is the next pimp game rapper comin’ from the west. If you notice, you don’t see hella shit with my name on it and a lot of unknown artists. I don’t want my name associated with just everybody. That’s the way I work.