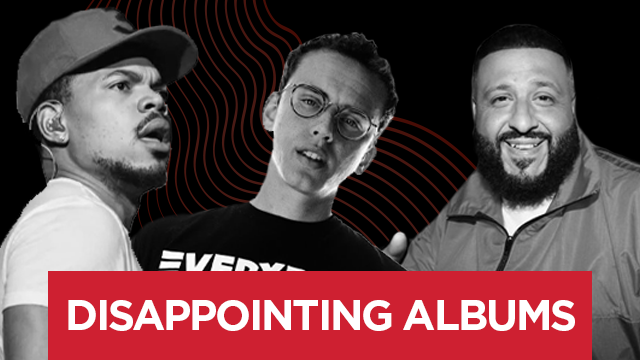 For the most part, Hip Hop in 2019 was nothing if not wide-ranging. Rap music from all over the world made us think, entertained us and left a mark on the culture. But there are five albums that fell more than a little short — they were so underwhelming they earned the title of the Most Disappointing Hip Hop Albums of 2019. Considering this was a year when Nick Cannon went for Eminem’s neck with multiple disses — and got roasted for his troubles — it took extra effort to suck this much.

Here are the Most Disappointing Hip Hop Albums of 2019.

Logic — Confessions of a Dangerous Mind

It’s one thing to be self-aware and another thing entirely to be self-conscious. And while Logic tries, desperately, to be the former, he ultimately comes off as the latter, which is why Confessions of a Dangerous Mind is nothing but a shoddy emo mess. There are a few moments of brilliance — “Icy” gets by with a little help from Logic’s friend Gucci Mane — but Confessions is mostly a series of songs that feature Logic trying too hard to be “down” for his own good.

Considering DJ Khaled pulled out all the stops to promote Father of Asahd — even going so far as to play kissy-face with Gayle King on CBS This Morning — one would think he’d have something impressive to deliver. But when the album dropped, we all realized he’d been doing the same thing since 2006. And while that sound and overloaded list of features then, it’s become stale and boring in what is about to be 2020.

As an artist, Gucci Mane’s legacy is certainly solidified. However, Woptober II was one of his most unnecessary and irrelevant works to date. Guwop’s second album of 2019 would’ve probably been best served staying on the cutting room floor of the studio. And who told him inviting Kodak Black to drop guest verses on ANYTHING these days was a good idea?

It’s hard to believe that today’s Trump-loving, silver-paint-wearing, slavery-is-a-choice Kanyeezus Christ is the same Kanye West that blessed the world with production on The Blueprint and put out the seminal 808s and Heartbreaks. But with his glory days seemingly behind him, Jesus is King is nothing more than a reminder of how far the mighty have fallen.

Chance The Rapper — The Big Day

It takes a lot for the entire editorial board of HipHopDX to universally agree on something, but they all agreed that The Big Day fell entirely short of expectations. Chance the Rapper is someone who, unquestionably, has a higher bar to scale than most, and perhaps the high expectations of what could have been are what made The Big Day so terribly disappointing. Regardless of the reasoning, the debut studio album fell horribly short of expectations.