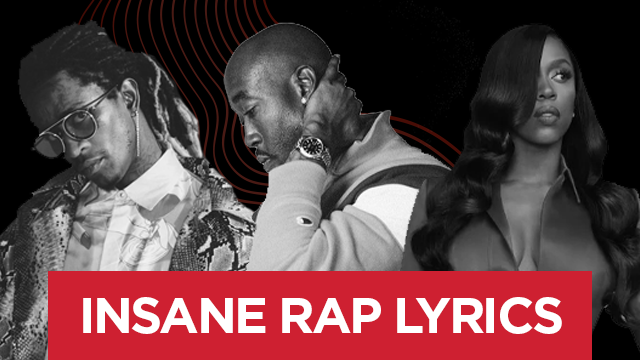 The Most Insane Lyrics Of 2019

At the end of every year, the team at HipHopDX likes to review and recap the most important things that happened in our culture. We look back at the Beef’s, the best social media moments, some of the best rappers in the game, as well as recognize the overall best. So check all that happened in Hip Hop in 2019 or click here if you want to see the full list of Hip Hop Awards, nominees and winners.

One of the most enticing aspects regarding the world of Hip Hop is the lyricism and its penchants for hyperboles.

Whether it’s ridiculous claims of wealth, braggadocio sex tales or retellings of the Terminator films, rappers know how to keep audiences entertained with their claims.

Eye-catching verses have been around since the days of Big Daddy Kane, Slick Rick and Special Ed and this year’s most insane lyrics uphold the controversy.

Have a look for yourself.

“First time I ever cooked a deuce, I got a four-way from it/Stabbed it in the pot so many times they think OJ done it”

“Bitch sit on my face, I attack that Choose up, lil’ junt, I’m finna pack him”

In just one year’s time, Las Vegas native Baby Keem has crowned himself as Hip Hop’s newest prince of shock value. After all, he did name his project DIE FOR MY BITCH.

“Wait Cozz, I ain’t sayin’ he a thot, my nigga/Look, let me explain We could tie Ib up Throw him in the back of a Lamborghini truck/Cole do something, we could let a Glock squeeze up”

Even as a conceptual song, things took a turn into Morbidbiville towards the end.

Hopefully, Rozay doesn’t make her kiss the ring as well.

Such a dirty rhyme on a squeaky clean album cut.   Does this make Obama an accomplice to “aiding and abetting?”

These niggas, they know I’m a dawg I ain’t worried about him, I know he a bitch (Meow)/The next nigga that come play with me I’ma send him to go ask 2Pac for a pic, bitch”

Or, they could play nice and wait for Coachella to bring back the hologram.

“Cartier eyes/Cartier coat, Cartiers the watch/Cartier love, Cartier the thot/Cartier specs, buffalo on the side/Princess cut diamonds, they Cartier, yeah/Cartier bag for the Cartier thot/Sky Wrangler coupe with two hundred the dash/Cartier jeans, ain’t no way I can sag”

Talk about product placement. They better cut the check for the next album.

Now that’s how you get off on a track.

Kash Doll on “Doin Too Much”

“I don’t be stressin’ ’bout none of these niggas/When they be talkin’, I don’t even listen/Tellin’ me secrets, I probably forget it/But I’ma tune in when he say he gon’ lick it”

Anyone who’s seen the Spike Lee-helmed masterful biopic can somewhat understand the sentiment. And for the record, Freddie has went on record to state he “loves” Spike.

Eminem on Fat Joe’s “Lord Above”

“I know me and Mariah didn’t end on a high note/But that other dude’s whipped-that pussy got him neutered/Tried to tell him this chick’s a nut job before he got his jewels clipped/Almost got my caboose kicked/Fool, quit /You not gonna do shit/I let her chop my balls off too before I lose to you, Nick.”

Who woulda thunk that the 2,132 traded bar between Nick Cannon and Slim Shady would have spawned not one but three diss records, re-unearthed racist commentary, reinvigorated battle rappers and dozens of hours dedicated to all the aforementioned horseradish on the radio? Um, good job, Em?

Let us know your favorite insane lyrics of 2019 in the comment section below.