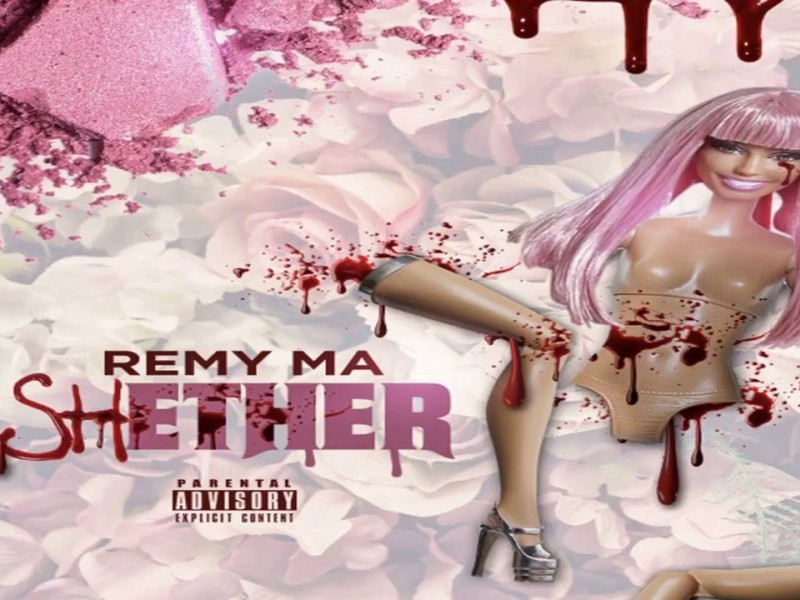 So Disrespectful: 10 Covers Just As Savage As ”Story Of Adidon”

The world erupted on May 29 as G.O.O.D Music president Pusha T responded to Drake’s “Duppy Freestyle” with a savage response that — among other things — suggested that Drizzy is a deadbeat dad of a secret son. Even more so than the track itself, “The Story Of Adidon” made waves with its cover art of Drake in blackface, which turns out was a publicly available photo taken by photographer David Leyes.

The image itself is reminiscent of that infamous Prodigy ballet photo that JAY-Z put on the Summerjam screen in 2001. However, it’s far from the only savage (officially released) artwork throughout the pantheon of Hip Hop. There’s been plenty of memorable covers over the years.

From Easter eggs meant to pop out for only the most seasoned fans to in your face disrespect that gets people talking, we here at HipHopDX have amassed a list of 10 album and single covers that scream “IDGAF.”

Back in his pre-prison hay day, rapper Tru Life had a beef with Dipset (the whole crew). It was at the height of this that he dropped Tru York, hosted by DJ J Love. The cover depicted Jim Jones wearing the infamous Borat bathing suit, and Cam’ron dressed in drag. It wasn’t long after his release that Dipset managed to hack his MySpace page somehow, replacing the album cover with an updated version — putting Tru Life in the Borat bathing suit, and JAY-Z in drag. The savagery!

It took balls to release a diss track aimed at West Coast artists circa 1991, let alone single-handedly putting NYC on your back and bombing the whole city single-handedly. That’s what rapper Tim Dogg did with the aptly titled “Fuck Compton,” where he went at an array of artists as well as the gang culture. The single cover pulled it all together with a provocative black and white image of Tim holding a burning Compton cap. Yikes.

Cassidy is a monster, that’s not up for debate. Back in 2013, following a rift between himself and rapper Meek Mill, there was a bevy of diss records that went back and forth. One that sticks out is “R.A.I.D,” an acronym for “Robert’s As Is Dead.” It’s a track that not only has an intro of Meek praising Cass’ punchlines but also starts off with a claim that Cass used to help him write his raps — on a Quentin Miller tip. The cover pushed things over the edge.

In 1987, popular rap star Kool Moe Dee was at the top of his game, releasing his platinum-selling LP How You Like Me Now. The savage Easter egg included on the cover was a red Kangol hat under the front tire of the Jeep — meant to represent LL Cool J, whom Moe Dee felt — among other offenses — had stolen his rhyming style. He also included some jabs at the “Rock The Bells” architect on the title track. It set off one of the most memorable spars in Hip Hop history.

When Papoose starts a track with “Big Sean album is trash,” you know he’s about to get hella disrespectful. His “First Chain (Remix)” ran down a laundry list of items that seemingly grinds his gears, from mentions of Biggie to an unchecked ego. The Mortal Kombat-esque cover definitely committed, depicting a beaten and duct taped Big Sean having his jewels snatched by the Brooklyn MC.

G-Unit – Elephant In The Sand

When it comes to beef, nobody plays ball like 50 Cent. In one of two entries on this list, he somehow attained a slightly unflattering image of Fat Joe — his then arch-nemesis— on a beach for his Elephant In The Sand mixtape. On what would be the final official mixtape from G-Unit, he baked and sizzled Joe Crack on every track. They’re cool now, though.

Aimed At: The Game

50 Cent and Game had a very public following out, which — naturally — played out throughout the later entries in his G-Unit Radio series. Part 21, which hit the streets back in 2006, depicted the Compton rapper as a male stripper named “Hurricane Game” in skimpy underwear, a theme he played upon the hilarious intro.

Sure, Nicki Minaj pulled Drake and made sure that all her Remy Ma jabs were made on Billboard charting singles, but it’s impossible to ignore the overall savagery of Remy Ma’s “shETHER.” The cover artwork has a pink haired Barbie doll covered in blood with its arms and legs ripped off. It’s a record that deserves a place among the culture’s finest roastings.

During his run on Everyday Struggle, the “retired” Joe Budden made it quite clear that he wasn’t fond of Lil Yachty or Migos. Though they couldn’t quite lyrically live up to his level, maxing out by calling him a pussy on the Quavo and Yachty collab “Ice Tray,” the single’s cover was pretty amazing. It depicts an oddly proportioned Joe Budden covered in QC and YBN tattoos/ jewelry. The “Pump It Up” tat was a nice touch.

If you’ve seen Straight Outta Compton, you have a great handle on the numerous rifts that existed between Dr. Dre and Eazy E. The film, though, has a glaring omission, Eazy’s ultra-disrespectful shots at the producer. The album liner for the final (complete) album he wrapped before his death, It’s On (Dr. Dre) 187um Killa, broke down Dre’s infamously clowned image of him in a sequin outfit, stylized as an “Obitchuary.” Ouch.