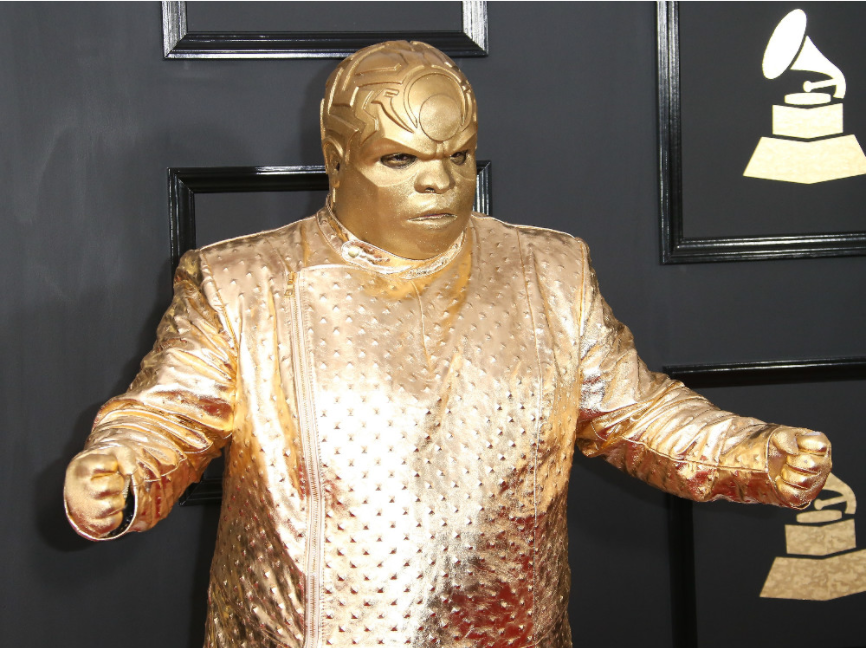 How Does CeeLo Green Go From Goodie Mob To Gnarly Davidson Golden Guy???

While the countless jokes and memes generated by CeeLo Green’s all-gold (and we mean allllllll gold) ensemble at the 2017 Grammy Awards were, well, gold, it’s impossible not to wonder — what exactly is going on there? Since stepping out with Goodie Mob in 1991, collaborating with his Southern brethren Outkast on records like “Git Up, Get Out” from 1994’s Southernplayalisticadillacmuzik and dropping the 1995 Goodie Mob debut, Soul Food, he’s always been a bit different, but still stuck within the parameters of classic Hip Hop. However, with this recent reinvention as Gnarly Davidson, he might have plummeted into the abyss and there’s no telling if he’ll ever be back.

A heaping helping of fried chicken, macaroni and cheese and collard greens…too big for my jeans…”

The Atlanta native appears to have gone full “rockstar” and is getting weirder by the day. Back in December 2016, a video surfaced of Green’s cell phone supposedly exploding in his face and understandably had a lot of people concerned, but it turns out it was just another well-timed PR stunt. Two days later, he introduced Gnarly Davidson with a video for “F*** Me, I’m Famous,” which did nothing for his already tainted reputation.

In fact, he left his seat on The Voice after a string of drug and sexual allegations that he was eventually cleared of, however, in 2014 Green pleaded no contest to one felony count of brandishing ecstasy and was sentenced to three years of formal probation, 360 hours of community service, and 52 Alcoholics Anonymous or Narcotics Anonymous meetings, but not before making some insensitive tweets about rape.

Over the years, his output has also become a stale concoction of a plethora of musical styles he seemingly just throws together. For example, 2015’s Heart Blanche lacked focus, much like his various personas. With his latest stunt, the Gnarly Davidson video for “Jay-Z’s Girl,” he again uses the mini-version of CeeLo (used in the “F*** Me, I’m Famous” visual) to fawn over Beyoncé and daydream about being her man. Considering the illustrious pop signer is both pregnant with twins and married to one of the biggest rappers in the industry, Jay Z, it comes across as rather foul. Coupled with his Valentine’s Day (February 14) interview claiming he wasn’t at the Grammys, it’s unclear if this is all for attention (let’s face it — it’s working) or if he’s truly lost his marbles — and he needs Tootles to help him find them.

“Oh that’s somebody else altogether, man,” he claimed when asked about the Grammy getup to TMZ while leaving the West Hollywood restaurant Delilah. Then when questioned further about his gold, Ferrero Rocher candy-looking outfit, Green simply replied, “I don’t know bro, I wasn’t there.”

The fact is he was there, but any semblance of the CeeLo Green we knew back in the early ’90s appears to be gone. His debut, Cee-Lo Green and His Perfect Imperfections (2002) and its follow-up, Cee-Lo Green… Is the Soul Machine (2004), showcased a healthy balance of weird and genius. Now he may be so whacked out the music gets lost in all the spectacles.

One thing is for sure, he’s not getting his hands on Jay Z’s girl — ever.