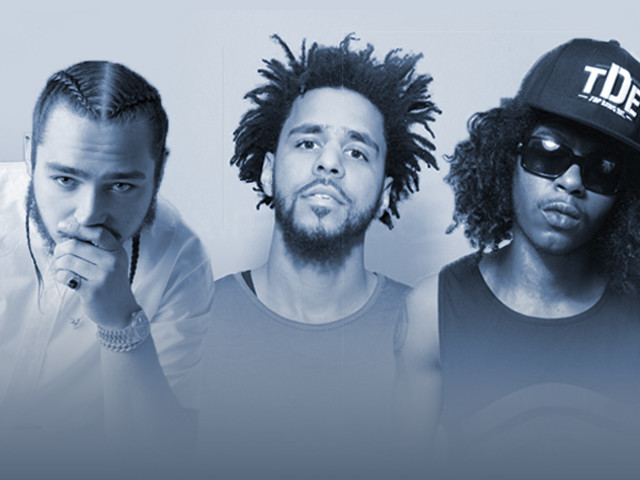 Many publications have already dropped their end-of-year list. That doesn’t mean that HipHopDX has to follow the trend. December 2016 has already provided some real early Christmas presents with some of the most highly anticipated albums of the year in Childish Gambino, J. Cole, Charles Hamilton, Ab-Soul, Post Malone, Tech N9ne, Hodgy Beats and even Kid Cudi. Is it too much though? There have been many complaints of hot second responses to releases, but digestion seems difficult with so much food available. Are all of these releases putting rap fans on overload? Giving their thoughts, DX Editor-In-Chief Trent Clark, Senior Features Writer Ural Garrett and Contributor Dana Scott answer that exact question.

Can Anyone Keep Up With All This Music Dropping In December?

Trent Clark: A historic trend I noticed in the HipHopDX Review section is readers comparing album ratings of projects that were released in close proximity to one another. For starters, the DX rating scale is based on a quality standard scale from the birth of Hip Hop to the present day so just because two albums were released on the same day, doesn’t mean they’re even comparable in terms of consistency, presentation, and strength of songs. But on the flipside, I can’t overlook how the release date calendar affects a fan’s listening experience. On September 11, 2007, the nation wasn’t even a decade in of mourning from the worst day on American soil but the bigger storyline was Kanye West and 50 Cent’s “sales battle” of Graduation Vs. Curtis, respectively. Here we had Universal Music Group pulling the biggest Houdini trick on the buying public, coercing them into thinking they were partaking in some sort of big event for Hip Hop (Kanye’s Graduation was an all-inclusive greatest hits album; I could hit the L.A. streets and confidently bet anyone $100 to name three songs off of Curtis without fear of losing that dub).

For the record, I left Curtis on the shelves and bought the criminally underrated Yung Joc Hustlenomics album but for the millions of fans who went out and purchased both aforementioned LPs, there listening experiences (at least for a time) became a parallel reality. Initial sessions of “Stronger” were undoubtedly contrasted with listenings of “Ayo Technology” creating memories brought forth simply by a calendar date. Over time, the strongest music rises to the top but as for those early listens, there’s competition to be had over attention spans.

That’s what December 9, 2016 represents to me. J. Cole’s raw popularity in rap probably dwarfs just about anyone in the game right about now but unless you’re a diehard Dreamvillain, the temptation to see what Ab-Soul, Post Malone, Hodgy, Tech N9ne and even The-Dream tombout was not only there but really accessible thanks to Apple Music, Spotify and TIDAL. I don’t think it’s necessarily bad for the culture per se but with streaming on the rise, the module of releasing albums in hopes of Christmas sales seems a tad bit dated for me. Especially since artists are no longer terrified of January releases. For many younger fans, however, yesterday, will be what September 29, 1998 was for me when I was in high school.

Ural Garrett: Earlier this week, the Grammys nominated two streaming only albums and a crowdsourced project for its coveted Rap Album Of The Year category. Meanwhile, as we all head into the weekend, there are at least four high-profile releases that represent significantly different aspects of Hip Hop. J. Cole is doubling down on his ability to not only spit the most relatable millennial-focused rhymes of the era but to repeat another platinum performance without features on 4 Your Eyes Only. Clearly, this is the most sought after of the bunch. Meanwhile, Post Malone may have released the most underrated debut of the year with Stoney for those who enjoy his take on post-Drake urban pop. Those wanting some truly dark and grime-soaked Hip Hop hopefully can enjoy Ab-Soul’s Do What Thou Wilt as much as I am at the moment. The most dedicated Strange Music and Tech N9ne fans are going to purchase The Storm whether critics love it or not. Anyone truly missing the 2005-2011 blog era raps are probably bumping the hell out of Charles Hamilton’s Hamilton, Charles. And finally, those holding on for a real Odd Future reunion can enjoy Hodgy Beats Fireplace: TheNotTheOtherSide. That doesn’t even count next week’s Kid Cudi, Gucci Mane and Lox drops.

As rap conventions get tossed out of the window, the options for music tailored to specific taste are getting broader. Those complaining about where Hip Hop is going are clearly looking for something to whine about at this point. At this point, there’s a little something for all sorts of rap taste and really reveals how nuanced the culture has really become. If someone likes Hodgy’s project over Cole’s, that’s totally fine. If someone enjoys Post Malone and Ab-Soul, that’s fine as well. If you’re still complaining about the Lil Yachtys and Young Thugs of Hip Hop with this much good music out, then you’re a complete idiot crying for attention. From both major label to indie, Hip Hop is healthier than ever and it’s partly because of the internet’s ability to bring freedom to the listener. Who cares if one can’t keep up with all the good music coming out this month? If it’s good enough, one will eventually get to it. Right now, the average listener is probably caught up with something else.

Dana Scott: Jay-Z said it best 10 years ago on “Show Me Watcha Got” to bring some idealism from Hip Hop’s seasonal mentality: “I already gave the summer some — it’s the winter’s turn.” For decades, December historically was a dormant month for the music industry other than releasing Christmas soundtracks. But for the rap industry, December has proven to offer fans some classic outputs and milestones. Need examples? DMX’s triple-platinum Flesh Of My Blood, Blood Of My Blood in 1998, which was the first time a rapper (of the same name) to boast two No. 1 albums in the same year; Brand Nubian’s One For All, which brought them into prominence in 1990 through the following year; Jay-Z’s Vol. 3: The Life and Times of S. Carter, which began the 21st century as the No. 1 album on the Billboard Top 200 album chart, a milestone for Hip Hop; PRhyme banger in 2014, and J. Cole’s magnum opus 2014 Forest Hills Drive that he’s attempting to follow suit with 4 Your Eyez Only.

Ending the year with an element of surprise rollout to add to the cornucopia of top-tier artists’ for their target demos brings excitement for fans to feast on their fruits. Receiving multiple audible treats from various rap subgenres as stocking stuffers for the holiday season is never a burden for listeners to consume or gorge themselves if they have a wide range of predilections in their playlist. This is great for the business side of the labels, too. These fiscal year-end releases are a push for labels to compete against each other for corporate billing to their distributors, and for their ancillaries to bring in more cash. In today’s social media era when fans have the most tangibility to the artist’s brand more than ever, it’s pertinent for them to ride the wave and start the new year off hot. It sets them up for a whole year to tour and earn dollars for shows. After J. Cole released 2014 Forest Hills Drive in December 2014, he toured for all of 2015 and became Hip Hop’s top-earning artist that year. All of these artists putting out new music this month have seemingly taken notice to his formula, and are now just following the leader.