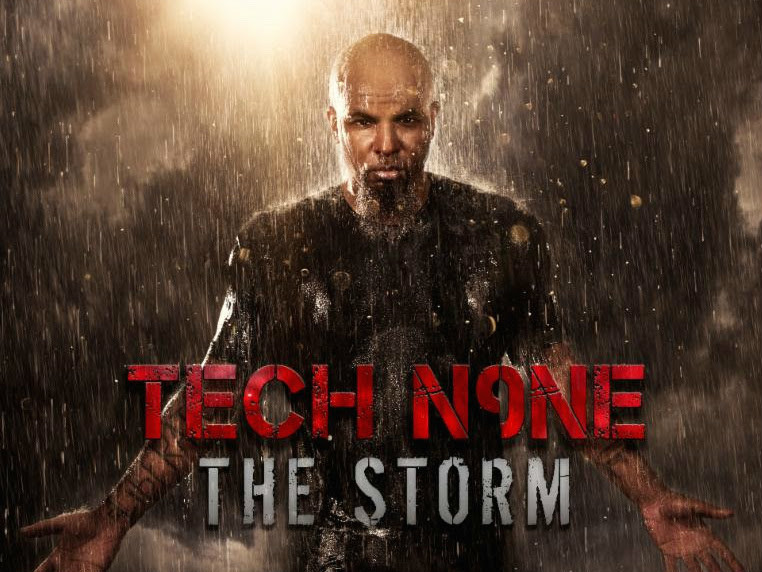 Tech N9ne has dropped his newest album, The Storm. The project is made up of 20 tracks broken down into three parts expressing different sides of the Kansas City MC’s personality, “Kingdom,” “Clown Town” and “G.Zone.”

The Strange Music co-founder has already shared the singles “Sriracha” with Logic and Lucas Joyner as well as “Get Off Me” with Problem and the label’s newest signee Darrein Safron.

The Storm was delayed as Tech went through a divorce and his aunt was shot in his hometown. He went on a nationwide tour that was supposed to be in promotion of the album without the album.

“I have to stay focused,” he said to HipHopDX in a Facebook Live interview back in November. “It’s hard but I make sure that I have some happiness around me when everything is fucked up. This actual album was supposed to come out September 9. I wasn’t done so I missed that beautiful date.”

Tech N9ne prepares for what’s brewing this fall as he releases the tracklist for The Storm album.

The LP, which is due out December 9, consists of 20 tracks broken down into three parts: “Kingdom” reflects Tech’s braggadocious side, “Clown Town” features the darkest music of the project and “G.Zone” is dedicated to the gangster life. The Strange Music boss had previously released one song from each phase and dropped “Sriracha” with Logic and Lucas Joyner this week.

Other features on The Storm come from fellow Strange Music artists Stevie Stone, Krizz Kaliko, Darrein Safron and Big Scoob, who is preparing the release of his own album, H.O.G., for a November 4 release.

The deluxe version of The Storm includes a fourth section with 12 additional tracks from Tech, Murs and more.

The Kansas City rapper is traveling on The Calm Before The Storm 2016 Tour through October 31.

Check out Tech N9ne’s The Storm tracklist below and pre-order the album at iTunes or at StrangeMusic.com with special edition packages.

(This article was first published September 9, 2016 and is as follows.)

Tech N9ne is bringing a wave of new music with his new album, The Storm, which the Strange Music boss announced today (September 9) via a press release.

The Storm is set to drop December 9 and will be made up of three sections. “Kingdom” reflects Tech’s braggadocious side, “Clown Town” features the darkest music of the project and “G.Zone” is dedicated to the gangster life. He released three tracks, — one from each section — ahead of The Storm‘s due date.

“I wanted to give a gift to you, my fans, and show you that I care about all of you, together,” the independent legend says. “To give you a song off of each level of this wonderful album. I hope you enjoy the songs as much as I do.”

The Storm is the follow-up to Special Effects, which was released last year and included the epic “Speedom (WWC2)” that featured Eminem and Krizz Kaliko. Tech N9ne and Strange Music also unleashed Strangeulation Vol. II.

Tech celebrated two singles being certified gold this year, which brings his total count of songs with 500,000 sales to three.

The Kansas City rapper is currently traveling on The Calm Before The Storm 2016 Tour.

View Tech N9ne’s The Storm cover art below and pre-order the project here.