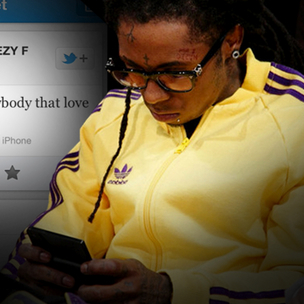 One of the consistently relevant aspects to Hip Hop (even predating it becoming a cash cow) is the art of competition extending to serious conflict. Where not so friendly disagreements in the past have led to squabbles for recognition and infamy at awards shows, charity events and music conferences, now the digital world has become the boxing ring for opponents to air out their differences. In 2012, Twitter is the place where Hip Hop artists are stating their differences. Crews are squaring off, veteran groups are breaking up (if only for a day) and it’s all happening for the fans and media in real-time.

Prior to the rise of social media, Hip Hop beefs typically began with a warning shot – whether a subliminal lyric in a verse, a radio or magazine interview, or even something as simple as an awards acceptance speech or liner note. Often, the other party would respond in similar means. In the event where a hostile situation couldn’t stay simply verbal, blows typically transpired at industry conferences, parties or live performances, most often after previous remarks were made. While there have always been tough-guys in Hip Hop good for some extra security, some of the 1990s most notorious altercations involved unlikely artists including Luke, KRS-One and Nate Dogg – and many others chronicled on QD3’s Beef DVD series.

As the wake of The Notorious B.I.G. and Tupac Shakur’s tragic murders placed matters into perspective and cooled the overall climate to a calmer setting where things could be settled on record. The most high-profile feud of the ’00s: Jay-Z and Nas, eventually emerged reconciled acquaintances from their epic battle of 2001. There were some brutal accusations made in the fury, but punches were never thrown and and shots were never fired. Similarly, 50 Cent’s juggernaut run from 2002 through 2007 rendered him Hip Hop’s mightiest court jester as he placed himself at odds with many of Rap’s stars (Ja Rule, Jadakiss, Fat Joe, Game, Cam’ron, Rick Ross, DJ Khaled and Young Buck to name a few) with crowds gravitating to his lampooning artistic peers on mixtapes. Although two of those incidents had dangerous repercussions (Ja Rule and Game), 50’s battles after 2005 seemed to live in music and print, never bleeding into the streets, award shows or industry events. Most of Rap’s A-listers followed suit.

Given the Internet proceeding to change a majority of daily interactions, where some emcees have been slower to embracing Twitter’s potential (Young Jeezy once taking pride in not being tech savvy, stated “that sounds a lot like snitching”), while others have latched on for the automatic gratification of communicating directly with supporters and detractors alike. One such case of a brash tweet (a Twitter message of up to 140 characters often sent via smart phones) that quickly received a response was one directed to Brooklyn’s Maino as he was shopping at a New Jersey mall, leading to a confrontation with the younger female sender in a YouTube video, gracefully resultant in cooler heads prevailing after a mild-mannered discussion. If artists can physically confront digital criticism from the fans in real-time, what happens with each other?

While the easiest assumption of Twitter’s use in fueling angst filled announcements is that of a cheap attention-starved ploy, its gradual arrival as the epicenter of digital information dissemination has found even lower profile acts logging on when riled up. In the midst of promotion for A Tribe Called Quest’s Beats, Rhymes & Life documentary, Q-Tip angrily used the device to speak on behalf of the group’s opposition to director Michael Rapaport’s vision for the film, which landed them an interview with MTV surrounding the fracas. Also, the underground stopped in its tracks as tensions flared between Phonte and 9th Wonder on Twitter, both previously quiet about Little Brother’s rift, had a disagreement over a song’s leak. Interestingly, nine months later, the pair used the same social media methods to announce their personal reconciliation to fans. Instances like these prove Twitter’s real-time technology, mixed with a fiery temper has led Hip Hop confrontation far beyond the artists who use threats in their lyrics or could ever be accused of a publicity stunt.

Formerly used for rash reactions brought on by short fuses and lapses in judgement, Twitter has made the damage control portion of a publicist’s job that much harder in quelling intensified rumors. One of last year’s notable shenanigans involved Fabolous playfully ribbing Ray J through tweets, leading to a reported shoving match shortly thereafter, likely due to massive retweets, as pressure fell on the latter’s shoulders to respond forcefully. An online issue moved offline, and millions were watching, reading and waiting for next press of “send” from either party.

The present state of affairs dictates a scene where no holds have been barred with Hip Hop’s emcees sparing no opportunity to let their feelings be known during Twitter controversies. In 2012 the social medium has given new life to long established beefs while also being the launching pad for brand new sagas to arise. Where Lil Wayne and The Clipse have exchanged barbs for years now, Wayne made waves sending the short phrase “Fuk pusha t and anybody that love em” in response to a freestyle interpreted as insulting towards YMCMB artist Drake, only to be met with a tweet from the group’s other half, No Malice making light of Wayne’s close relationship with Cash Money CEO Birdman. As for Drake, his recent involvement in a spat with Chris Brown at Soho nightclub W.i.P. became instant news as Chris ranted and raved, showing a picture of a cut on his chin to anyone willing to watch. Millions did, in one of 2012’s biggest News stories.

@NoMalice757
aka Yes My Lord Well I LOVE Pusha! That’s my blood and I ain’t never kiss em.
May 26 via Twitter for iPhone  Favorite  Retweet Reply

While Chris Brown was involved in a short-lived e-feud just a year ago with Odd Future’s Frank Ocean and Tyler, The Creator, the other huge Twitter beef story of 2012 took nearly everybody by surprise. On the morning of this past April 9th, Mobb Deep’s die-hard fans awoke to see a number of slanderous tweets from Havoc’s account aimed at his partner in rhyme Prodigy, sending shock-waves through the Hip Hop’s universe. Though both members of the group claimed Havoc’s phone to be hacked, spectators were left skeptical.

Conversely, when Pete Rock recently used Twitter to have words with Lupe Fiasco over using the sample for “T.R.O.Y.” or when Lil Wayne called off Nicki Minaj’s performance at Hot 97’s Summer Jam due to the station’s employee Peter Rosenberg trashing Nicki’s music, combatants were locked in and confirmed as ready to throw down online. In the latter case, the rabbit hole went deeper as Charlamagne Tha God and DJ Envy, employees of Hot 97’s competitor Power 105 took the opportunistic chance to side with Nicki in tearing down Rosenberg and the iconic Funkmaster Flex (already engaged in an on and off Twitter beef with Power 105’s DJ Clue that has translated to airwaves), spinning off a separate series of Twitter madness altogether. Twitter fuels the fire, and ironically, both examples have since reportedly reached resolution.

In a day and age where Twitter allows newer artists such as Stalley to catch feelings about his work not being received with the same fervor as producer Hit-Boy’s latest single, Roscoe Dash to diss Meek Mill for his role in egging on the aforementioned Drake and Chris Brown scuffle, and Ice-T to hand a tongue-lashing to singer-songwriter Aimee Mann, there is neither a shortage of participants willing to air grievances in this manner nor an end in sight to this phenomenon. Where Internet users formerly relied on the the word of gossip in mere hopes of accuracy during the aftermath of drama, Hip Hop now beats sites like Perez Hilton and TMZ in telling our stories in real-time, creating a news cycle where every Twitter scandal assists in the maintenance of buzz. Most fans are enthralled by the dysfunction as tweets are the new press releases and PR statements in a game built upon feeding the beast, and while Twitter’s theatrics aren’t normally publicity stunts, many seize each and every opportunity to sign on and speak with their fingers when tranquility dissolves into turmoil.

Is Twitter Beef An Epidemic In Need Of Resolution?

The exact train of thought as to where such incessantly reckless abandon stems is anyone’s guess, but logic stands to reason that rappers have become so accustomed to scrutiny by paparazzi and the world at large that the sanctity of one’s online presence has become subject to mindless sacrifice as a part the machine. Thrilled by the immediacy of focus shifted their direction and the needs to be heard, respected, appreciated and occasionally coddled with fanfare and adulation, Twitter’s validation allows fans active involvement in their feuds, perhaps filling a self-conscious void where critical acclaim garnered from music isn’t enough. Optimally the Hip Hop tide could flow in harmonious rhythm, but so long as healthy egos go untamed we can now expect harsh differences be hashed out through technology, accepting Twitter as today’s not-so-secret weapon brought out in times of crisis to increase one’s visibility if just for a few hours until we’re distracted by the next shiny object commanding our discourse.

Jesse Fairfax is a native of Harlem, New York presently based out of Los Angeles, California and a contributor to HipHopDX since February 2012. Follow him on Twitter @Goinradiodotcom.