The Clipse Talk Retail, Lifestyle Music And Giving Back

You couldn’t necessarily be blamed if you walked into Phatkaps Incorporated in Nashville, Tennessee on January 29 and thought something was amiss. The store, which occupies 9,500 square feet of retail space, is packed to capacity during what will later be announced as the worst blizzard to hit the city in a decade. Usually, the city Young Buck dubbed “Cashville” unofficially shuts down when hit with this much snow. Yet, adults and a surprising number of teenagers—some even accompanied by a parent or two—are here to see The Clipse perform after an in-store appearance in support of their Playcloths line. Strangely, during this snowstorm in the Country Music capitol of the world, the reigning kings of Coke Rap are right at home. 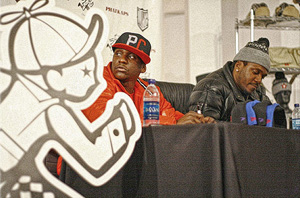 “We only deal with the best stores, and that’s why we’re at Phatkaps,” Pusha T points out. “Even in dealing with the public, Playcloths was first to assist with the [earthquake in] Haiti. This is as real as the music to me.” The Clipse are in full hustle mode. Theirs is the kind of hustle that will turn buying a $35 embroidered t-shirt when it’s 30 degrees and snowing outside into a humanitarian effort. Stick around, and Pusha and Malice will even autograph your new purchase or your copy of Til The Casket Drops. But their numerous husltes aside, tonight’s appearance is also part of a massive clothing drive to aid Haiti’s aforementioned earthquake victims.

Pusha T’s assertion that he approaches music and fashion with equal passion draws an interesting parallel, since rappers find themselves taking losses in both retail clothing and music sales lately. During a period when the US Government reported declining retail sales for six consecutive months in 2009, Eve and Young Buck watched their signature collections join the likes of Nelly’s Vokal, Outkast Clothing Company and others in the graveyard of rapper clothing lines. And everyone is familiar with the decline in Hip Hop’s physical album sales happening over the last decade. Despite what the statistics say, Malice and Pusha T find themselves next to, Phatkaps’ ever-present founder, Talmage Shearer, with both parties successfully doing something different than they planned.

“I think it’s about being credible,” Malice explains. “A lot of people sacrifice that for just going over the top. We’re pretty much known for our credibility and our name. That’s all we have. We ain’t going double-platinum every album, but people can still count on that same quality and know what they’re getting from The Clipse. That carries over to the clothing line and any other outside ventures we do.”

Those outside ventures now include Malice’s upcoming book, Wretched, Pitiful, Poor, Blind and Naked as well as a growing presence on the Web. The similarities between the unexpected turns on his own journey and that of Malice and Pusha are not lost on Shearer.

“I started this venture in 1994,” says Shearer. “Little did I know, it would give me the opportunity to reach a lot of young people. I’m a very spiritual person, and Phatkaps has allowed me to get into issues much larger than fashion and clothing.”

Similarly, Malice and Pusha find themselves dealing with different issues than those they faced upon entering the game. They have never been ones to give elaborate explanations of their lyrics. Even on 2002’s “Young Boy,” when Malice regrettably spilled family business by rhyming about his relatives “With a history of hustlers/Little brother, big brother, mother to grandmother,” there was always an unspoken understanding listeners would connect the dots themselves. When pressed about themes of infidelity, guilt and redemption on Til The Casket Drops, Malice is just as vague, saying, “A lot of people commented on seeing the growth, and that’s also true as far as where we’re at in life.”

But all it takes is a casual listen to “Freedom” to find references to children, wives, girlfriends and lost family members. The former far outweigh any mention of coke, digital scales and the luxuries it provides. Like any entrepreneurs, The Clipse have taken their losses—like the soured relationships with Elektra and Jive over the albums Exclusive Audio Footage and Hell Hath No Fury. More importantly, many of their loved ones aren’t able to see their success up close, including former manager Anthony “Geezy” Gonzalez, who was indicted on drug trafficking charges last April. As the brothers sit with two residential houses worth of jewelry on them, I ask if the success justifies the sacrifice.

“I can’t say that,” Pusha T says somewhat pensively. “I can’t say it was worth it, but it just comes along with the territory. Everything that’s happened to us has happened for a reason. None of that can really be changed, and I don’t think there’s anything we would’ve done differently. You just have to roll with the punches, because you’ll always have to deal with them.”

And, on a night, when eight inches of snowfall was supposed to turn this event into a bit of a disappointment, the Thornton Brothers do just that. They’re winning at a time when the odds say they shouldn’t, and they have every intention on continuing.

“I don’t think success is something you’re supposed to shy away from,” says Pusha T. “This shit is a very tedious business. And with all the losses you take in this game, you better leave with something.”

As the night draws to a close, Shearer shares a brief moment with Malice and Pusha. He grew his business from a tiny mall kiosk in Knoxville, Tennessee, which featured 60 Negro League baseball hats. The Clipse began their run with an album that Elektra shelved for fear of lackluster sales. All three men managed to turn things around to the point that they are still thriving even in the current economic climate. 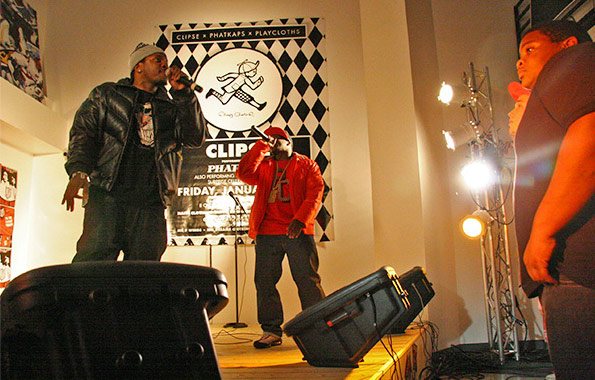 “It’s more about articulating what’s in your heart without losing people,” Malice offers. “I think we found a niche where we still stayed true to ourselves. We explained what was in our minds and hearts, and people could definitely relate to what we were saying.”

The snow will eventually melt. Roughly a week later, Nashville will be back to normal—with talk of Taylor Swift’s inability to stay on key during her Grammy peformance dominating the local headlines. But for the moment, The Clipse have the attention of all the city’s inhabitants interested enough to brave the freezing temperatures. Their grind is bolstered by a small group of customers, and in a lot of ways, that’s always been the case no matter what they’re selling.