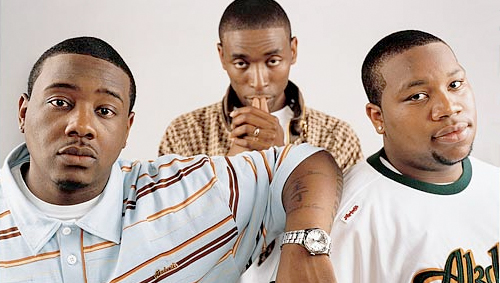 For nearly three years, Little Brother and 9th Wonder have kept quiet the root of their post-Minstrel Show separation. For much of the media, it’s been “don’t ask, don’t tell,” as neither part has welcomed opportunity to speak about the critically-acclaimed early ’00s Hip Hop trio becoming an emcee duo.

This past weekend, as Little Brother readies their reported final album, LeftBack, tensions, and perhaps tempers flared as Phonte Coleman and 9th Wonder spoke to each other via Twitter.

The root of the conversation came from the upcoming LB album, which was set to include a 9th Wonder-produced track, “Star”

as an iTunes bonus exclusive. The song was recorded approximately five years ago, shortly after the Minstrel Show sessions for Atlantic Records.

After 9th Wonder was needed to approve the song for release, the Grammy Award-winning producer reportedly refused, telling Little Brother’s manager Big Dho that the record was not to be released with LeftBack.

After sharing with Twitter followers that 9th had wished for the song not to be included, Phonte (@Phontigallo) added, “In any event, I’m not gonna let anything or anybody stop me from getting music to my fans. Fuck that. Enjoy. And as always, thank you for listening.” With the message, Phonte offered the song for free download.

The tensions became mutual when 9th Wonder (@9thWonderMusic), responded to a curious fan in saying, “…only if they knew the REAL story,” regarding the status of his former group. Via Twitter, Phonte accosted his former groupmate, saying, “Well tell your side of it or shut the fuck up.”

The conversation continued, as 9th Wonder replied, “you are NOT a tough guy…….none of us is…so KILL that noise…..and niggas aint shuttin up. [sic]” The “us” presumably referred to Little Brother, a group that met and formed at North Carolina Central University in 1998.

Known for his stoicism and quiet nature, 9th Wonder added, “I have maintained silence on the matter for LONG time..for this reason. I apologize to yall for steppin outta character,” speaking to his 31,000-plus followers on Twitter.

Phonte followed by posting a Saturday afternoon vlog entry to his own 17,000 followers and additional fans. “A lot of cats was kinda shook up with what went down between me and 9th Wonder today on Twitter,” began the emcee, singer and Foreign Exchange member. “This will be the last statement that I’ll make,” he said, before speaking about the root of the issue.

Phonte said that “Star” was initially intended to be released on The Wonder Years, 9th Wonder’s shelved album for Asylum Records. “You know what, man, I’ve got this one, last 9th [Wonder-produced] record that everybody’s [suggesting we release on the final Little Brother project].” To illustrate his disappointed, Phonte revealed that he and Rapper Big Pooh recorded “No Time To Chill” for 9th Wonder’s 2007 Dream Merchant Volume 2 album, without any direct request or gratitude. “During this time, we weren’t on speaking terms…9th never asked us to do that record; our manager Dho asked us.” Although Little Brother was newly without 9th, Phonte says he felt compelled to support his former band-mate. “Me and Pooh was both just like, ‘Dude, fuck it.’ And we did it.” Although the independent album, particularly that song, was talked about in the media, Phonte says he was never thanked or compensated for that track. “After it was done and the record was out, I never got anything – a call, a thank you, regardless of money. It wasn’t about money.” Phonte also said that it might not have been 9th Wonder who requested the song, giving the producer the benefit of the doubt.

In the video, Phonte also recounts the 2007 phone-call that ultimately cemented 9th Wonder’s departure from Little Brother. A conversation between ‘Tay and Pooh prompted a meeting request with 9th. Phonte suggested the trio meet alone in their North Carolina recording studio. After obliging, 9th then suggested they meet at Phonte’s house. Moments later, according to ‘Tay, the producer requested to have the conversation by phone. That request ultimately affected Phonte’s feelings about his former cohort. “I lost total respect. I feel like, at the end of the day, no matter what differences we have as men, we should always be able to talk.”

In conclusion, Phonte made the following ultimatum in the situation: “I’m offering one of three choices to 9th. One: I’m extending an olive branch. If there’s anything you want to talk to me, me and/or Pooh, you can address that face-to-face to us, like men. You can sit down and talk to us, like men. At the end, we can say what we got to say, it is what it is – either good or bad…my office is open. The door is open.”

The emcee also offered more of the same treatment the group had been dealing with, save for yesterday’s outbursts. “Two, either we both have a gag order.”

The last option was the following: “Three, keep doin’ this passive-aggressive shit you doin’, and you can keep feelin’ the consequences of it, as you did today.”

At press time, 9th Wonder has yet to respond.