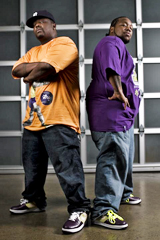 Just as 2003 championed Little Brother as the last true underground Hip Hop act groomed for, and welcomed to the mainstream with the interest to support it, the last five years may have punished Rapper Big Pooh and Phonte. The media got nosy, three bandmates became two, and the group was dropped by a major label and profited upon by an independent.

Things seem better now though. ‘Tay and Pooh have time, energy and product to properly launch their fledging Hall of Justus imprint with the re-release of And Justus For All, their 2007 mixtape, less the Mick Boogie tags and with a few replaced tracks. The emcees have at least three solo and outside projects in tow, and appear more confident about their future than ever before.

Like Willie Hutch sang, Brother‘s gonna work it out. Although the motivation and pleasures have changed, the good music hasn’t, and gearing up for another busy summer, Phonte and Pooh break down a few of their favorite things.

HipHopDX: At this point, the mixtape was out quite some time ago. It was a hot mixtape; I still listen to it. But with an album out less than a year, what made you want to revisit And Justus For All?

Phonte: A lot of people don