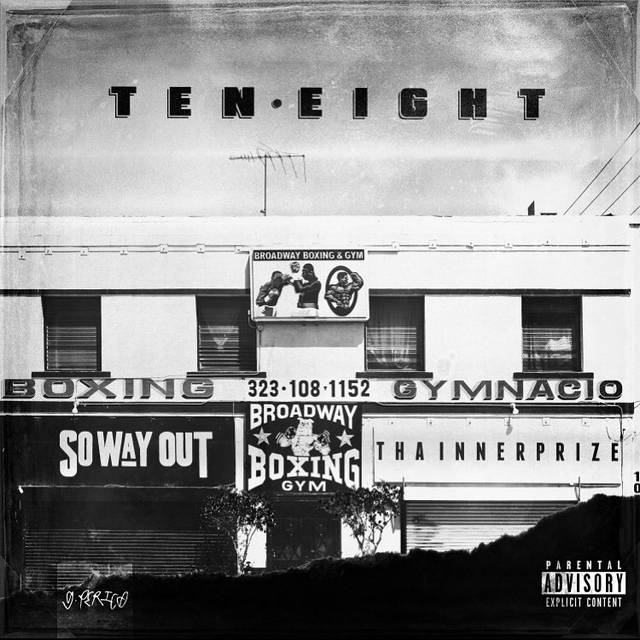 The store So Way Out sits on the corner of G Perico‘s hood on 108th and Broadway in South Central Los Angeles. Its numerical code inspired the title of his debut Roc Nation LP Ten-Eight.

It’s the same location where he surmounted numerous raids and fights while also nearly escaping death after nearly being shot at in 2016 — all while trying to establish himself as a legit artist.

Despite going through what some would perceive as imperious setbacks, Perico didn’t allow adversity to stand in the way of creating the type of music made for the city he loves. As his debut mixtape is titled, Shit Don’t Stop, it really doesn’t.

Not for G, anyway.

The DJ Quik and Eazy-E comparisons have been discussed ad-nauseam over the course of his five-project career which include 2018’s Guess What?, 2017’s 2 Tha Left and All Blue. At this point, it’s something listeners should just get used to.

“We talkin’ authentic street music, a sound that the people can trust,” Power 106’s Justin Credible and DJ Sourmilk of the LA Leakers cement on the project’s intro. “That’s what G represents to the city.”

And according to the project’s self-titled track, G still loves the hood even though it “might sound crazy,” considering how much affliction he’s encountered living there. He even admits to might needing therapy.

“Can’t trust nobody in the hood,” he spits. “I know these niggas they’ll kill me if they could / Every attempt ever made straight backfired / Tell the cops I’m legit, bitch, I rap now.”

The leading difference between G’s previous projects and Ten-Eight is his life’s position. He therapeutically opens up about his life like a personal diary to discuss baby mama woes and newfound fame on the down south Cash Money Records-inspired heater “Number 1.”

Sonny Digital continues Perico’s West Coast-Southern infusion with “Big Raccs,” which is good enough to get played on both coasts.

The reflective cut “Dog Year” drowns in an effervescent No Limit elixir as he further expresses what life is like living in South Central as written in his rap diary.

Despite the presumed seriousness of Ten-Eight heard on tunes such as the catchy “Trust Nothing” and “Days of Our Lives,” the project is filled with high-energy bangers mixed with a few smooth R&B-laced tracks.

Real 92.3’s Home Grown Radio personalities’ DJ Hed and Chuck Dizzle add a layer of comical relief to the project as they joke around about G liking and commenting under “all of the girls pictures,” before leading into the serene cuts “What’s Up” and “Lil Baby.”

Even with the southern additives, G’s sound is extremely West Coast and most palatable for those who live within the city. Not so much for mainstream consumption. The danger of this lies in deadlocking where he’s from and becoming relegated as another local rap sensation — unless that’s what he wants.

As a whole, Ten-Eight is just another scene from G’s life movie and another page turned in his diary where the pain, hurt, betrayal, love, excitement, and beauty of living in Los Angeles finds a place. Perico’s storytelling is projected through his West Coast inflections and rhythms in such a compelling way that allows listeners to understand where he comes from.

The fact G Perico has made it this far, to becoming one of JAY-Z’s Roc Nation latest signees, is evidence that his presence can potentially put him in the position to become a mainstream West Coast fixture.