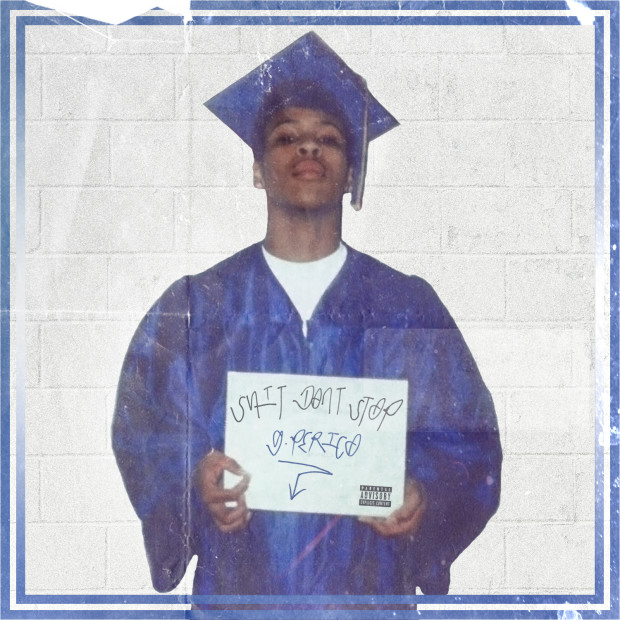 Try and picture a rapper with the vocals of a young DJ Quik, the attitude of a pre-Are We There Yet? Ice Cube and the exact same Jheri curl as Eazy-E. That equation would be G Perico and the West Coast up-and-comer, whose new mixtape is heating up the Compton area, could very well land him a spot amongst 2017’s most important artists to watch out for.

G Perico’s Shit Don’t Stop is without doubt his professional introduction into the rap game. The self-proclaimed and Twitter bio’ed “street poet” has seen a bit of notoriety stemming from his assist on fellow West Coaster Nipsey Hussle’s “Basic Instinct” track. And as they so often say in rap, this first official release has taken Perico his whole life to write.

The first track sets the twangy Left Coast tone for the preceding 15 songs. A laid-back, breezy, lowrider instrumental brings in a smooth chorus that repeats “come into my world.” Just as you think the mixtape’s sunny day sonics will rock you to sleep, you get a vigorous slap in the face with the abrasive title track. He’s only one project deep and you can tell that this poignant — yet #woke — street observer role is exactly where Perico will be most comfortable. He so ostentatiously claims that “if it ain’t a million dollars, it’s a hundred thou plus” while unassumingly stating that he’s “still got the same phone line if you wanna talk.” This duality between the hood and Hollywood appears on almost every track on the tape. On “Streets Don’t Love Us,” Perico breaks down the battle of being the one dude from the block that makes it and becomes consumed with survivor’s remorse.

The consistency on this tape dangerously dangles on the line of semi-unoriginal but being that it’s Perico’s first “cracc” at a full project, it’s understandable why every beat (divided up by the likes of Scott Storch, Mike Free, Brody Brown (of 1500 or Nothing) and WebbMadeThis, among others) sounds like it came straight out of the G-funk 101 handbook. Additionally, the subject matter stays in a similar tightly knit wheelhouse consisting mostly of come-ups, struggles and survival. Previously released “South Central” however, is truly as Cali as it gets. Not only does Perico’s flow and demeanour on the track identically resemble some of the L.A. greats, but featured guest Jay 305 could pass for E-40’s voice double.

This mixtape is safe bet to become a G-funk junkies’ not-so-guilty pleasure thanks to the West Coast bounce but Perico’s story and “L.A. vs everybody” attitude won’t fit everybody’s playlist and he has little ways to go before he can be musically compared to some of the Gangsta Rap greats mentioned in the review’s intro. That said, if you aren’t totally on board at first listen, try cutting it on in the car. Driving slow. Windows down. Hydraulics optional.