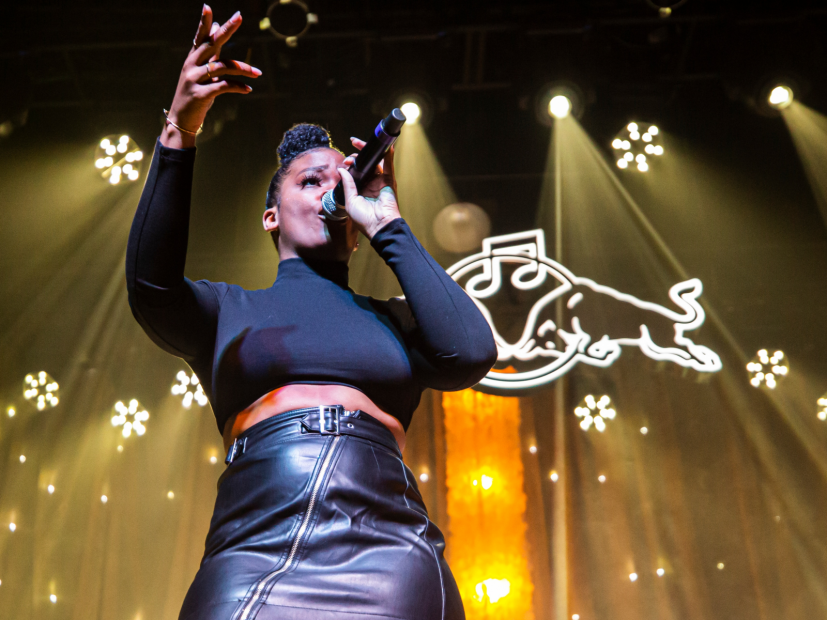 Atlanta, GA – Although the message was a bit touch-and-go, it appears a sophomore album from Ari Lennox still has a good chance of arriving.

As she told HipHopDX after her headlining Red Bull Music Festival Atlanta performance — “it might be 25 years” — but for her loyal fanbase, that’s better than nothing.

After stepping out of the rain and onto her bus for our interview, it’s easy to see why Ari holds Shea Butter Baby so close to her heart. Despite the long line of journalists waiting to speak to her at a drizzly 1 a.m., when she talks about her debut effort, Ari’s smile glows warmer than the scented candle she’s burning.

“This album was really special, and I think it’s because I took my time,” she tells DX.

Her milestone-marking year — complete with a debut album, first headlining tour and Grammy nomination — has been almost a decade in the making.

Initially growing from YouTube cover videos, Ari made history four years ago when she was the first woman to be signed onto J. Cole‘s label imprint, Dreamville Records. She went on to appear on Revenge of the Dreamers II and III, dropping her debut EP Pho in 2016.

“All I had was Cole,” she revealed about her early industry years.

Now, she has Shea Butter Baby — the result of a long journey paved by odd jobs and crazy roommates, which is what makes her debut effort worth standing up for.

HipHopDX caught up with Dreamville’s leading lady about the game-changing lessons she learned from Shea Butter Baby, her love for Summer Walker, the crazy roommates that inspired “New Apartment” and more.

HipHopDX: I saw a tweet of yours a little while back, where you said you were tired of performing old music. Does that mean you’re working on some new stuff or heading toward your sophomore album?

Ari Lennox: The thing that I feel like I messed up on, before dropping my debut album, was not dropping enough singles. So that’s what I wanna make sure I do, no matter what, is just drop music. But the sophomore album, I mean, we have so much work to do. So I can’t even imagine when that will come out, but I think I’m gonna take my time, ’cause this album was really special and I think it’s because I took my time. So it might be 25 years [laughing]!

HipHopDX: And then you think you’ll hold fans over with some singles?

HipHopDX: What’s something you learned from Shea Butter Baby, being your debut album and your Dreamville debut project?

Ari Lennox: Some things that I learned—trust my gut because, you know, I love everyone in my life, I love Dreamville, but there was some people in Dreamville that was like, ‘What? You don’t need that song on your album, it’s no good.’ Or, ‘It wasn’t as good as this song or that song.’ And I was just like, no, it means something to me. It gave me chills, or it gives me chills, I want it. And so I learned to really fight for what I believe in.

Ari Lennox: Also, somebody wanted to drop the album after my debut headline tour. They wanted to drop the album after that shit! I was like, how are you gonna call a tour the Shea Butter Baby Tour and there’s no Shea Butter Baby album? Like hell no, we are not scam artists, like no. We’re gonna drop this album, and then we’re gonna do this tour. So people had like two weeks or maybe a little less than that to learn the album, but they did, ’cause the first date was Phoenix, Arizona, and everybody was so sweet and supportive. And they knew it!

HipHopDX: I loved that video you did with Summer Walker.

Ari Lennox: Damn! That is really deep. No [laughing]. I felt like, all I had was Cole. Just a lot of beautiful males—like beautiful souls, energy, that’s Dreamville. Just super beautiful people. They have my back. But then, over time, I feel like there were people that reached out—well, I guess yeah. Elle Varner, I feel like, showed me a lot of love. She’s a real one. She showed me a lot of love. And Teedra Moses, Elle Varner was actually from the beginning, like she just loved on me. I would say yeah, Elle Varner. I’m trying to think, was there other women that like helped me…

HipHopDX: Well, as the first female signee to Dreamville, you kind of had to pioneer that.

Ari Lennox: Yeah. I’m really trying to think. That is really deep! I don’t think I had like a big sis or something. I’m just so happy to know Summer because she is just so fucking wise and smart and sweet and like I just want to protect her. She’s, I feel like, too wise for all this shit. Like, if you ever are blessed enough to just listen to her talk, it’s crazy. Like, she really be speaking some real shit and be having me thinking like, why the fuck do I care about designer anything? Or I don’t know, just stupid surface shit. Like, you know, she’ll really have you thinking.

HipHopDX: Especially when you two talked about performing while you’re going through stress or tragedy or depression.

HipHopDX: And maybe people don’t always think about that.

Ari Lennox: It’s really nice that I can confide – like, it’s just nice to be experiencing the same things. It’s just so Aries — ’cause she’s an Aries as well, and it amazing that I feel like we’re so much alike. Except, I can see how she’s changing, and I can see how I’ve changed. Like, I used to love getting my purses from anywhere, from Target and Rainbow, and now I don’t know why I’m so fucking basic. Like it has to be a stupid name brand, it’s so sad.

HipHopDX: But your album was so relatable. I think you’ve stayed true to yourself.

HipHopDX: The most relatable song on there is probably “New Apartment.” Tell me about what inspired that song. I know there has to be a crazy roommate story.

Ari Lennox: Someone that’s crazy? [Laughing] Alright, one time I looked on Roommates.com ‘cause I was trying to move to L.A. Found this girl, she was from Maryland, so I was like, ok, I like that because I lived in Maryland. I’m from D.C., but yeah. I took a Greyhound bus out there, because back then I refused to get on a plane. I was so scared. But now it’s like a piece of cake.

HipHopDX: Right, you got to do it now.

Ari Lennox: Yeah! I gotta do it. And so I get there and she picks me up from the Greyhound station. Everything’s cool and I don’t know, as days went on she’d be up blasting music, singing loudly and terribly to Drake. I was just like, oh, it’s fine, it’s whatever. And then one day, we were walking somewhere and she was yelling at her fuckbuddy over the phone, or something, and I asked her, I said, ‘Hey, where do we live?’ ‘Cause I didn’t know the area. And she was like, ‘You don’t know where you live yet!?’ And I was like, oh hell no, this hoe is crazy. So the next day, I left a soda on the counter, and she said she didn’t drink soda—she drank my soda! She was like, ‘Yeah, I had your soda.’ I was like, ‘Why would you do that?’ And she was like, ‘Oh hell no, you can get out!’ I cursed her out. She started recording me, so hopefully, there’s no video out there [laughing].

HipHopDX: Yeah, it’s gonna come back to you 10 years later!

Ari Lennox: Right! I pray she deleted the video, but she definitely recorded me saying some shit to her. I was talking my shit, like really hoe? But the craziest part of the story is that she told me that I was supposed to have my own room. She described it to be like this room that I was gonna rent. What she showed me was a closet, where you could only keep—not even a fucking futon or anything! This hoe really played me!

HipHopDX: Roommates.com. Don’t do it.

Ari Lennox: And it was so much shit like that! That’s why I was so excited to get my first apartment.