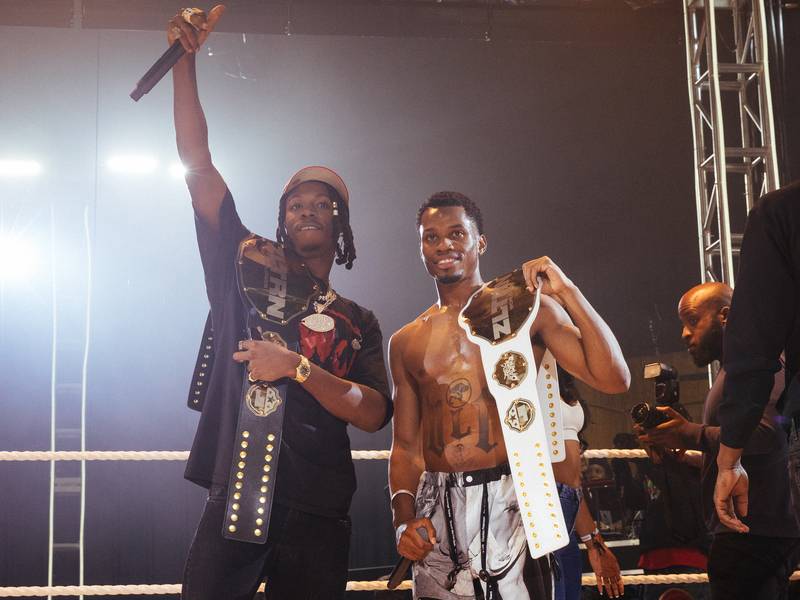 “Name a rapper that’s doing some shit like this right now,” Curry said backstage while speaking to HipHopDX. “And if they ain’t a part of this shit, that means they’re scared as fuck!”

Fans usually stroll into a typical rap show expecting to see some local acts or touring openers kick off the event. But those in attendance at Red Bull Zeltron World Wide — a sequel to last year’s Zeltron v. Zombies in Miami — were treated to something much different.

Spectators surrounded a legitimate wrestling ring to watch an actual professional wrestling match begin the festivities. One of the wrestlers was using a police officer gimmick, which made him the biggest heel (a.k.a. bad guy) of the night. The rabid crowd cheered and chanted “fuck 12” as his opponent slammed the cop on the mat multiple times before getting the 1-2-3 pin for the victory.

After the physical slugfest, it was time for the lyrical combat to take center stage. Complete with an introduction reminiscent of a prizefight, Joey Bada$$ stepped into the ring and basked in the crowd’s adulation. Meanwhile, Curry was chomping at the bit to compete.

“I feel great,” he told DX. “As a matter of fact, I feel more than great, nigga. I feel godly right now! Before I even hit that stage, everybody’s gonna feel my presence before I even say something on the mic. Not to sound arrogant or no bullshit, but shit, I’ve got the right to be. I’ve been humble for too damn long and I came a long fucking way.”

Curry even cut an old fashioned promo that would make Ric Flair or The Rock proud, as heard below.

Once the Carol City, Florida native’s name was announced and he entered the ring, the intensity was palpable. Joey and Curry paced around the ring, raring to go in a duel contested over the course of five rounds.

With Red Bull Zeltron World Wide being Curry’s event, Joey was forced to lead off Round 1. The Pro Era leader went back to 2015’s B4.Da.$$ and performed the DJ Premier-produced “Paper Trails,” which had much of the crowd reciting every line. But the energy was cranked up a notch when Curry took his turn, sending the crowd into a frenzy with “RICKY.”

Joey was faced with a tough assignment as Curry’s pure zeal was impossible to match. So in Round 2, the Brooklyn-bred MC spit some acapella bars directed at his opponent. Curry tried to snap back with some barbs of his own, but Joey declared his opponent “a pussy” for talking during his set time.

The histrionics benefitted the Wu-Tang: An American Saga star, who taunted Curry about only performing hype songs and screaming on the mic. Joey then resumed his performances with renditions of “Rockabye Baby” and “No. 99.”

As the momentum seemingly swung to the Pro Era camp, Curry got the crowd back on his side by starting a “fuck you Joey” chant. He then debunked his competition’s claim of strictly shouting on the mic by displaying a more subdued style. The former Raider Klan member still commanded fans’ attention with this different approach, which worked well with his set list of “Black Balloons” and “WISH.”

After two rounds and a brief intermission, the battle shifted into its next gear for Round 3. Joey put on his proverbial game face by donning a NWO Wolfpac t-shirt as the concert resumed. Following a performance of Power Pleasant’s “Pull Up,” Joey dropped the first bombshell of the night by bringing out WWE’s R-Truth.

The wrestling superstar also happens to be a rapper himself, so Joey had R-Truth perform an entire song as part of the third round. Curry did his best to downplay Joey’s powerplay by cracking some jokes but backed down when R-Truth jumped back in the ring for a face-to-face confrontation. After seemingly accepting defeat, Curry bounced back and recaptured the crowd’s support by performing “Sumo” and “Threatz.”

But Joey wasn’t done with his surprises. Since the event was being held in Atlanta, the New York-bred rhymer called on a local legend to gain the hometown edge.

Pastor Troy, complete with his signature championship belt, joined Joey and took over with a performance of his classic single “No Mo Play In G.A.” For a few minutes, the crunk era was resurrected as Troy reminded everyone in attendance of his ATL Hip Hop legacy.

While Joey had the edge in terms of well-known guests, Curry didn’t come empty-handed. Kenny Mason, one of Atlanta’s emerging talents, got an opportunity to display his skills during Curry’s time. Other notable ATLiens such as Jace and Reese LaFlare also popped up in the ring along with an unexpected appearance from Guapdad 4000.

The two stars of the show didn’t fade amid all the cameos in the final two rounds though. Joey paid respects to his fallen friend Capital STEEZ and the late XXXTENTACION before wrapping up his night with All-Amerikkkan Badass single “Devastated.” And Curry’s showmanship shined with a retro microphone dropping from the ceiling for TA13OO’s “Clout Cobain” before transitioning to his ZUU cut “SPEEDBOAT.”

Curry closed out Round 5 by electrifying the crowd with his booming anthem “Ultimate.” As the scene around the ring turned into a mosh pit, Zeltron staked his claim for victory with a raucous performance that rattled the venue’s speakers.

In the end, both Curry and Joey were awarded championship belts. The two expressed their mutual admiration and openly wondered about teaming up together in future editions of Red Bull Zeltron World Wide. Joey even laid out a challenge to A$AP Mob, though Red Bull officials told DX no acts had been booked for the future editions of the series.

As for who the winner of the night was, DX’s unofficial scorecard gave the nod to Curry. While Joey was more than game and did a great job picking guests to bolster his outing, Curry was in another league in this unique setting.

His unrelenting fervor had the crowd eating out of the palm of his hands for all five rounds, making him the rightful champion. And bouncing around the ring for hours without rapping over a vocal track was incredible to witness, not mention a good lesson to any rappers still using that crutch.

Red Bull has announced Zeltron World Wide will continue in 2020 with stops in Miami, Oakland and New York City. Fans should do whatever they can to attend one of those events because Curry’s wrestling-inspired show is a spectacle unlike anything in Hip Hop today. After witnessing his clash with Joey in Atlanta, it’s safe to say Curry is one of rap’s best live performers and someone expanding the boundaries of what a concert can be.