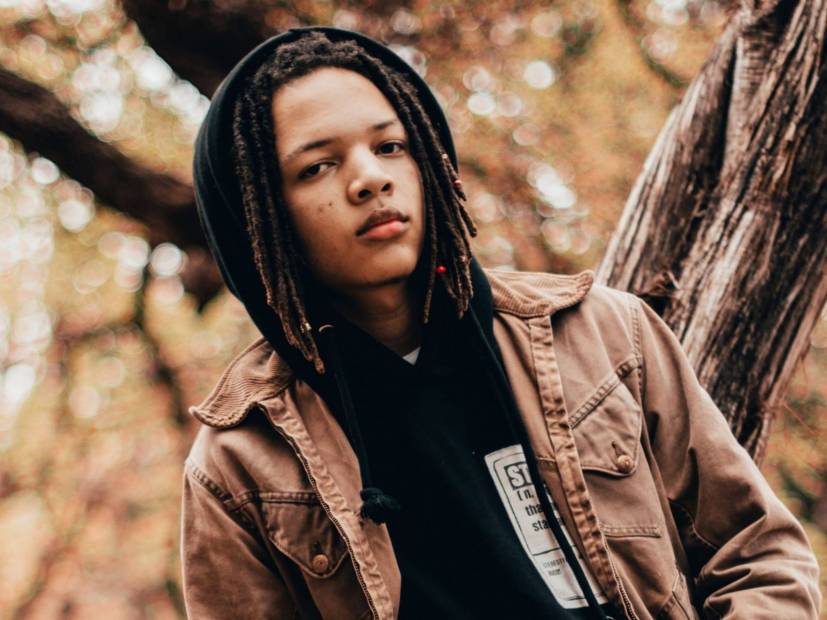 Domani Harris was at the merch booth inside Cervantes Masterpiece Ballroom during a recent stop in Denver, Colorado where he was shaking a lot of hands and doling out plenty of hugs. As an opener on the Big K.R.I.T. and Rapsody tour, the 18-year-old son of T.I. has had ample opportunities to connect with a whole new fanbase.

And there’s a sense that fanbase is rapidly expanding — especially in the wake of his J. Cole co-sign. The day Domani’s debut album Time Will Tell arrived, the Dreamville mastermind called The Family Hustle star and told him he believed he’d just delivered a “classic.” Video of their conversation just started making the rounds last week.

During a recent interview with HipHopDX, Domani talked about that moment, revealed he’s going on his first European tour with J.I.D and opened up about how public school molded him into the compassionate young man he is today.

HipHopDX: I said hi to you in Denver, but you got whisked away by somebody. In those few moments of our interaction, you struck me as the most polite young man I’ve ever met.

Domani: I appreciate that.

HipHopDX: It seems you were raised right (laughs). Do you think good manners are important?

Domani: That’s a good question. I just always like to be a student and be humble. I feel like being able to learn, being able to be taught — that’s being humble. I like to think I can learn something from everybody and everything, no matter what. And that’s how I keep an open mind.

HipHopDX: How’s the Rapsody and K.R.I.T. tour going and what’s it feel like to be on tour with those guys?

Domani: Man, it’s dope. I tell them all the time that I’m grateful for the opportunity and it’s a learning experience. Every show is an opportunity to get out and meet new fans, gain new fans, learn about new people, talk to people. I go out into the crowd by the merch booth pretty much every night and talk to people, meet people. I have them telling me stories and how certain things are affecting them. And that’s what drives the music. That’s what inspires the music.

HipHopDX: Right. I mean, just knowing that you have an impact on people with your music has got to feel incredible. The big news last week was the J. Cole co-sign. How did that feel to get Cole’s support? He’s calling your album a classic. That’s a huge compliment.

Domani: Yeah, that was crazy. That was the day my project came out. I was in a mall passing out flyers and he called me back. I had called him when the album dropped. He didn’t answer, but he called me back and I was just surprised he had all of that to say. It really caught me off guard. I said, “Whoa.” But it was crazy.

HipHopDX: Cole is a lyrical MC and I think you have that gift for writing. Time Will Tell absolutely showcases that. Tell me about your videos. It seems like you really put a lot of thought into them. Do you feel the video is just important as the song?

Domani: I feel like it all goes together. Everything goes together. When I make the music, the music might not even be done yet, but I already had the vision for how I want it to feel or how I want it to look in my head. I might get something from the beat. I might see a story in my head from the beat, or I already have the story and then a certain piece. I match my story and then after the song, I just kind of just paint that picture in the video.

HipHopDX: You just released “One Day” not too long ago, and I felt like that was another one where it’s just some deep content. Was that based on a true story?

Domani: Of course, it’s a true story, but the idea and the message that I wanted to get across was all these kids are going through their own things in their lives — a young lady’s mom died. Then a guy’s baby mom died and he had to raise the kid on his own pretty much. Everybody got their own things going on and they all got together. They still had a goal to graduate and they executed it. That really stems from me going to public school.

I feel like that’s what really molded me into the person that I am right now. You know, being around real people with real problems and learning about them and learning how to understand them, and just being an understanding person. That’s what I wanted to get across, for real — how everybody had their own things going on, got through it, dealt with it and did what they wanted to do.

HipHopDX: It’s what makes us us, I guess. Do you think growing up with the parents you have, there are misconceptions about you?

HipHopDX: Is it a conscious choice to distance yourself from your father or mother to build your career on your own?

Domani: Yeah. It was really at a young age. I just knew I wanted to go on my own path. I used to try too hard not to follow certain people or follow certain things, and that would lead me off of my own path. I really just kind of had to get in between that sweet spot and find myself and my path. I think the music can really show that I’m finding and I have found myself.

HipHopDX: Yeah, definitely. I think that’s evident on pretty much every song. Does that kind of tie into your decision to do the whole Strivers Row campaign? In one of the video clips, you say something about making your own name and it’s really about being an individual.

Domani: Yeah, of course. Strivers Row is a brand that I wear anyway. So, it only made sense for us to come together and do that. But yeah, striving to be yourself, striving to make your own name, make your mark.

HipHopDX: What are some of the biggest challenges you’re facing right now as an up-and-coming artist that gets frustrating or maybe is a little bit difficult?

Domani: It’s really yourself for real. It’s really all in your head. If you can see it before it happens, you kind of have a better opportunity of controlling it and controlling where you want to go, controlling how you want it to be. I see the videos and I see the vision already when the music is made. So it’s only right to go ahead and execute that. I’ve had this vision in my head since I was very young. It’s just putting pieces to the puzzle. I would say that’s the most important thing — to have a vision and know where you want to go instead of walking blind.

HipHopDX: Totally. Where do you want to go?

Domani: Well, I want my music, my legacy, my stories to live through other people and live forever.

HipHopDX: We all hope to leave some sort of impression, right?

HipHopDX: Are you working again on another album right now?

HipHopDX: When does the tour wrap up?

Domani: The last date is November 16 in Atlanta. We’re announcing the next tour soon. So yeah, just basically getting out, meeting people, you know, get my music out to as many people as I can.

HipHopDX: What’s the next tour? It’s the same people or different?

HipHopDX: Is this your first time touring Europe?

Domani: Yeah, it is.

doing what u love around the people u love is a blessing. catch me and my sis, @rapsody in a city near u on my brotha @bigkrit’s tour RIGHT NOW. #FromTheSouthWithLoveTour tickets and dates in my bio

HipHopDX: You mentioned the Rapsody and K.R.I.T tour was a big learning experience for you and I was wondering if there was anything that stood out to you that you’ve learned along the way. What are some of those lessons?

Domani: Good question. I’m definitely learning a lot just being away from home. You got to become a little bit more patient on the road. And then when you opening up for people, you got to be patient. I would say patience and really learning. Every night I sit and watch a K.R.I.T and Rapsody show, I just soak it in.

HipHopDX: I had a chance to meet Rap not too long ago and her energy was amazing. You’re in good company.