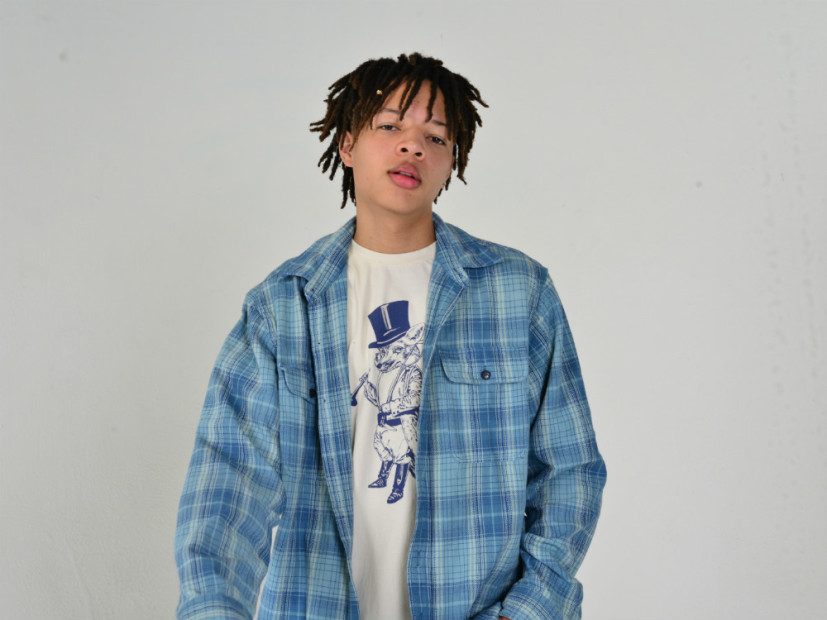 T.I.'s Son Domani Harris Finds His Own Shine Away From His Father's Shadow

Domani Harris is carving his own lane and not just because of his sound, but because he is breaking away from the shadow of his well-known father, T.I. The second eldest son of the Grand Hustle boss admits in an interview with HipHopDX that he drew his interest in music from watching his dad and cousins go to the studio. But as he dives into his own craft, he wants to be known for his own artistry.

“I not only believe that this is important, but this is just life,” he says of making a name for himself apart from his father. “You have to eventually go off on your own and find your own purpose in this world.”

The 16-year-old sensation recently released his debut EP, The Constellation, a moody 10-track project that is mature and articulate.

The teenager has somewhat grown up in front of fans’ eyes, appearing on T.I. & Tiny: The Family Hustle for six seasons. The first episode of the show’s seventh and final season aired Monday (April 17). Domani says the reality show was a great learning lesson for him as he learned how to be in the spotlight.

In regards to what he’s learned specifically from his father about the music industry, Domani is hesitant to find an answer, but he knows his dad has helped equip him to navigate the waters of the game.

“I don’t really like these questions, but I understand that since I’m in the position that I’m in, people really are curious about these things,” he says. “But the most influential thing that my dad has told me, (that really stuck with me) would have to be that this music industry is a business, and in this business lies a lot of money, and a lot of distractions. I think after I really thought about that, I kind of took on a lot of situations differently.”

And that has applied to his own hustle in creating his sound, which is much more ethereal than the hard-hitting trap music Tip has helped pioneer. Part of Domani’s journey has been finding the right production for his work, a subject he explains on the outro of The Constellation.

“I feel like the producer really makes the song, because it’s the sounds that the producer puts together that gives you that melody that allows your words to flow and make that song, or get across that message,” he shares. “And I simply just needed to work harder and constantly perfect my craft in order to receive those sounds, because no one wants to give their hard work, and their talents to someone who doesn’t even look like they’re serious. I just had to show people that I was serious, and really go in and say something on every instrumental — or as I call them, ‘canvases.’”

And Domani is not afraid to use his canvas to share his many emotions and expressions with his audience. On “Right Now,” he delivers a subtle “Fuck Donald Trump” line, following his father’s own vociferous comments about politics in the past election. He says that everyone should find a way to voice their opinions whether they think they have the power to or not.

“If I see that there’s an issue that needs to be talked about, then I feel like my art should be the best place to put those emotions,” he says. “I feel this way because if it’s your art that speaks for people, then you should be a voice for the ‘voiceless.’ I put the quotations around ‘voiceless’ because I feel like everyone truly has a voice. You just have to figure out a way for your voice to be heard.”

dis isn't "work" fa me. been doin dis back when I was takin toys apart and building my own shit.

The most introspective track on The Constellation is “Off My Chest,” a clear break away from the bravado of trap music. Domani insists there is no genre that prohibits people from sharing themselves in their music and instead, it’s each artist’s responsibility to share his or her story in a way that reflects their personality while connecting with the audience.

“I don’t really like to classify music as, ‘trap music’ or ‘street music,’” he explains. “I feel this way because I believe every real artist wants to grow, and would like their audience to grow with them. ‘Trap music’ is just an artist soaking in the environment that’s around them,  and that’s just how their music comes out to sound. But yes I believe it’s very important to show emotion in your work. I think that’s where the real art comes from. Having people from all around the world connect to the artist just from the emotion that he or she projects off an instrumental. That’s the important part. A connection, because you might know what you’ve been through, but they won’t if you don’t make them feel it.”

Domani feels he’s on the right track toward putting all the pieces together to say what he wants to say. The title of his EP comes from this idea that it wasn’t an easy journey, but he is growing in his confidence and clearly has a bright future ahead.

“The Constellation is just me realizing that I have to get all my stars aligned in order for people to see my full image, or for people to see my vision, because for a long time I use to get mad and frustrated that people never saw what I saw in my head,” he says. “They never seen my full potential. I knew what I was capable of, but all they saw was T.I.’s son. And for a long time I stressed myself out because of that, but now I understand. All I have to do is get my stars aligned so they see what I’ve been trying to say this whole time. This whole EP was just myself saying, ‘I have something to say.’ And I feel like I got that message across.”