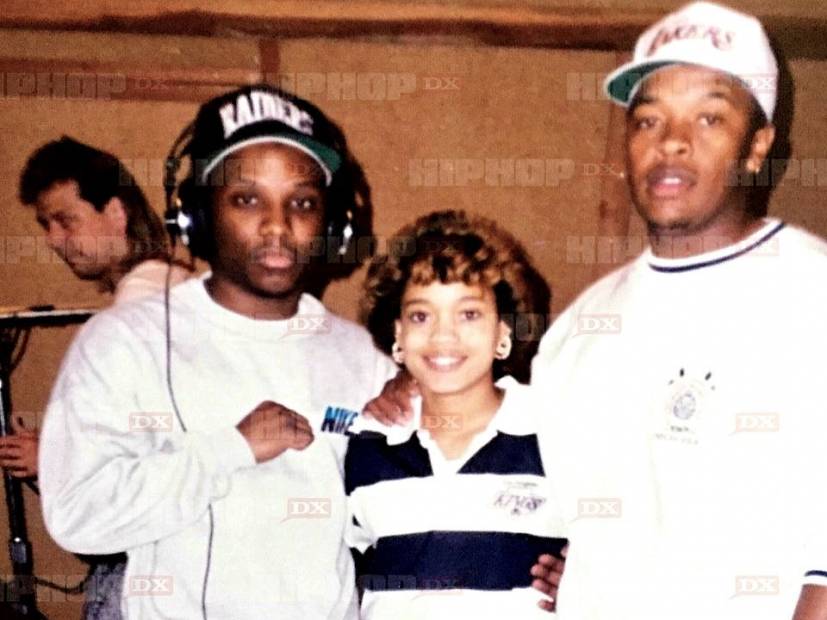 Despite the hardcore gangsta rap N.W.A pumped out during its tenure, Dr. Dre, Eazy-E, MC Ren, Ice Cube, Arabian Prince and DJ Yella had a soft spot for J.J. Fad. After all, Sassy C, Baby D and MC J.B. were barely out of their adolescence when they became the first female group signed to Ruthless Records. In fact, Baby D wasn’t even in high school yet.

“Baby D was only 15,” J.B. tells HipHopDX. “She really was a baby [laughs]. She was still in middle school so yeah, it was kind of weird being that young. But you just wanna do something different. You have a passion for music and rap and at that time, no one was doing it. We didn’t realize how important it was going to be or how big it was going to be. When it really hit, we didn’t really get the magnitude of it.”

Their impact is still felt 30 years later. Last summer, J.J. Fad celebrated the anniversary of their seminal album, Supersonic. Produced by Dre, the 10-track project was certified gold by the RIAA three months after its June 1988 release.

“We had so much fun [making the album],” she says. “We had the best time. As many times as Dre would say, ‘Again, again, again,’ we didn’t even get mad. We just start laughing like, ‘Oh my god, are you really gonna say again again?’ He’s such a perfectionist. But we never got mad because we knew that he had our best interest at heart, so we never got mad about that and we would have a blast. We played tag in the studio, so we really had the best time ever.”

Supersonic also earned the group an historic Grammy nomination. They were the first female rap group to ever receive the honor so, of course, they had to attend the ceremony. While groups like Public Enemy, Run-DMC and DJ Jazzy Jeff and the Fresh Prince were boycotting the 1989 ceremony, Baby D, Sassy C and J.B. were willing to go simply because they understood they might not ever get another chance — and they were right.

“That was such a pivotal and exciting moment for us because we were so young and to be nominated with the group of people that were also our peers was amazing,” she says. “Now, the downside of that is that was the very first year they put the rap category into the Grammy’s and the Grammy people decided they weren’t gonna televise that portion of it. So us and Kool Moe D were the only ones who decided to go. Jazzy Jeff and the Fresh Prince, Run-DMC and I think Public Enemy were all nominated and they all decided to boycott.

“We were like, ‘Should we have boycotted as well?’ But we were so young that it was like what if this opportunity never comes again? And it didn’t. I’m so glad that we went, but at the same time, I understand now more of why they boycotted and did what they did. They were making a stand and we were too young to understand that. But the blessing in all of that though is that none of those groups ever held a grudge or said, ‘You guys are wack for going.’ Nobody ever made us feel bad for going, which I really appreciate because they could’ve totally dogged us.”

Looking back, J.B. doesn’t have many regrets about those early years, although she does wish they wouldn’t have rushed their second album, 1990’s Not Just A Fad. Rather than have Dre at the helm, they enlisted the help of Arabian Prince and DJ Yella. In hindsight, she realizes their impatience took them off course.

“We should’ve waited for Dre, but we didn’t because we were young first of all, and we didn’t understand the whole business as well as we should have,” she admits. “But we figured, ‘Okay, we can’t rest in between albums. Supersonic is starting to die down and we need to come back quick.’ Dre was like, ‘If you guys want me to do it, you gotta wait like a year and a half’ and we were like, ‘What?!’

J.J. Fad will always be a part of Ruthless Records’ legacy. The whole roster treated them like family. If N.W.A would’ve emerged during the #MeToo era, many of their misogynistic lyrics would be scrutinized and quickly become a trending Twitter topic. But back then, they were fearless and said whatever they wanted no matter how reckless it seemed. J.B. recalls a conversation with Eazy regarding the way they sometimes spoke about women and he told her something she’ll never forget.

“Eazy-E told me this a long time ago and it just stuck with me,” she says. “When we first started we were like, ‘Don’t you feel bad calling all women bitches and hoes and don’t you feel some kind of way about that?’ He looked at me and he said, ‘Are you a bitch?’ I said, ‘No’ He said, ‘Are you a ho?’ I said, ‘No.’ He goes, ‘Then we’re not talking about you.’ And I was like, ‘Wow, I never thought about that.’ That never left my mind.”

J.B. explains that wasn’t really who they were — it was more of a persona.

“The funny thing is, being in the studio with all of them guys and hearing their lyrics and stuff, when they weren’t in the booth, they didn’t talk like that, which everybody is gonna be really surprised about,” she says. “We were treated like their little sisters. They were very protective. They made sure we were taken care of. Nobody could step to us. It was like they were very, very gentlemanly and protective.

“They were basically trying to shock the world. I’m not gonna say some of it wasn’t their truth because it was, but most of it was for the shock factor and letting people understand the kind of world that they came from. Only people that get upset about that are the people who are that.”

Fast-forward to 2019 and J.J. Fad still performs regularly, something J.B. recognizes doesn’t happen for everyone.

“It doesn’t even seem like that long ago,” she admits. “It seems like yesterday. It just makes us realize how old we’re getting [laughs]. But it’s just a blessing though to still be able to get up do tours and still be able to enjoy what we do.”

In Part II of the J.J. Fad interview, J.B. talks about the group being left out of 2016’s Straight Outta Compton biopic, lessons she learned from Chuck D and the time Run-DMC’s Darryl “DMC” McDaniels had to babysit Baby D.