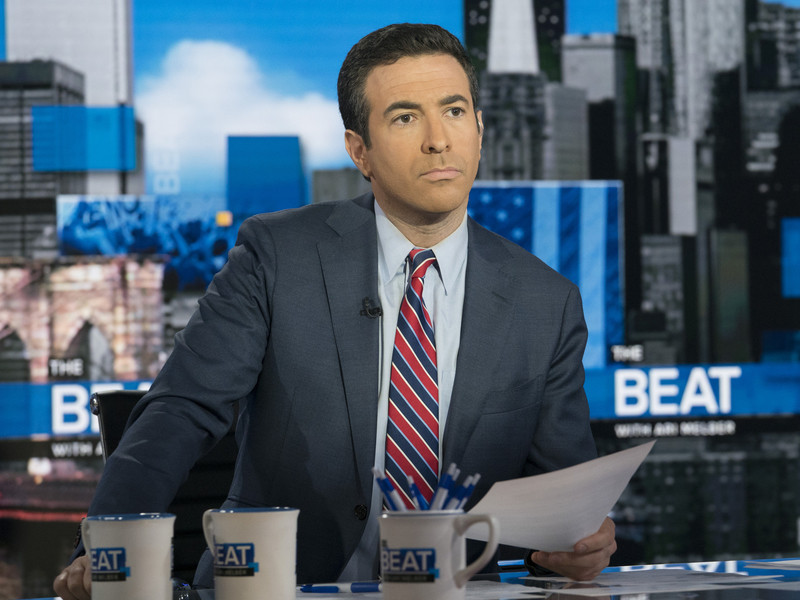 Hip Hop has always been intertwined with politics and its cultural influence is extensive, so it’s only natural for the two worlds to collide. Look no further than Kanye West turning things upside down by pledging his allegiance to Donald Trump for the impact of such a crossover.

Weekdays on MSNBC, Ari Melber finds ways for Hip Hop to help clarify the twists and turns of the nonstop news cycle. As host of The Beat and a regular guest on other shows, Melber enjoys implementing rap lyrics in his coverage to make topics of the day — particularly legalese — more understandable.

Melber’s penchant for Hip Hop references hasn’t gone unnoticed, catching the attention of everyone from 50 Cent to comedian John Oliver. HipHopDX caught up with the veteran journalist/lawyer to discuss his use of rap quotables, the notoriety he’s received for it and much more.

DX: Can you recall the first time you were able to slip a Hip Hop lyric into a broadcast?

Melber: Oh gosh. I don’t know that I remember the very first time. I can remember doing it during the 2012 campaign. I remember going on live TV changed as Twitter and other platforms became more prevalent and how people would react in real time. Viewers and also, sometimes, prominent people. So I do remember discussing Erskine Bowles telling Mitt Romney to stop quoting his budget plan, and I likened it to Three 6 Mafia saying, “Keep my name out your mouth,” as a guest covering [the] 2012 [election]. And I do remember that being an early time where there was some interest afterward.

Is there a favorite line you’ve been able to get into a broadcast? I know the one that impressed me recently was when you got Kevin Gates’ “2 Phones” on there.

I got “2 Phones” and also Kevin Gates’ “All my diamonds shine ’cause they really diamonds.” I mean, I don’t think of it as playing Bingo and trying to get different people in. One reason I quote JAY-Z more often is that I am a huge JAY-Z fan, so I’ve probably memorized more of his songs than other artists, so it’s as simple as that – just like you’re more likely to compare things to basketball than badminton if basketball is your language.

So, I definitely think about that, but sometimes, you’ll hear a song, and you know … well, I’ll give you an example. The government’s power to search has always been a big deal. The Constitution limited it ’cause the founders were worried about that abuse. Many rappers talk about police powers and their potential abuse. There are certain concepts that really, naturally overlap with what I’m reporting. How the Feds get a warrant to search Michael Cohen or Paul Manafort, that just naturally have been explored in music.

Do you feel like the constant legal drama that is surrounding Trump these days has provided you more opportunities to get these references in?

Yeah, because we’re living in a world where covering the White House and covering criminal law have a very high overlap. That may not be good for America, but it certainly adds a lot of important and sometimes momentous controversies to cover.

Recently on John Oliver’s Last Week Tonight, he did a whole compilation of your rap references. Did you get to see the clip?

Were you surprised you’ve been so prolific with them to warrant a compilation?

I was totally surprised. I was out and started getting messages about it. So, I heard about it before I saw it. They definitely busted me for leaning on JAY-Z more than other artists. And they also caught me overusing Kanye’s “35th of Nevuary” line. I didn’t realize that I’d gone back to the well on that. So having been busted, I’ve gotta steer clear of that now. [laughs]

It might help you stay sharp on that end. [laughs] I thought another cool moment was when 50 Cent went on Instagram and referenced you with the whole Michael Cohen situation. It was nice to see that gap bridged.

I was blown away that 50 caught my reporting on Morning Joe and made his response. And I don’t think that’s only because we’re in a dialogue about the news. I also think that we’re in a period of America being tested. So, it’s a line between politics, culture and how people live their daily lives … it’s thinner than ever. And so, it’s not a reach that 50 Cent would be talking about what could make Michael Cohen flip any more than everyone else that’s interested in that.

From Morning Joe to @50cent and back again

On a recent episode of The Beat, you had Havoc on for a discussion. It was pretty cool to see because you broke news about another Mobb Deep album coming on there.

Yeah, Havoc told me that he is a regular viewer of The Beat, so we were psyched to learn that. And like other guests, you ask people about the news in their lives, but you also ask about their work. And so, he revealed the work on a posthumous Mobb Deep project that Prodigy had contributed to before his death. So that’s a big deal.

We see ourselves as a show that doesn’t just use culture to try to explain the politics. We want to engage culture directly as well. I had Charlamagne Tha God on, and we talked about Trump and Kanye, but he also talked about why he goes to therapy and the pressures on black masculinity in American culture. I don’t think that should be ruled out of a nightly news show. I think if we’re telling stories accurately, we’re gonna try to tell all the stories.

With Hip Hop’s prominence, how important is it for you to find ways to weave it into the broadcast and connect with viewers that wouldn’t normally be watching MSNBC?

I don’t think of it as recruitment for new viewers because my first responsibility is to the people who actually tune in to the show. But I’ll reach for anything to help explain what can be unnecessarily complex matters.

Lawyers and other people with fancy degrees sometimes speak in a very exclusive way, for no good reason.And you could talk about the plain view exception to search and seizure law, or you can quote “99 Problems” saying, “My glove compartment’s locked, so is the trunk in the back, so you’re gonna need a warrant for that.” He’s referring to the plain view exception, and the officer can search what’s in view but not the locked parts of the car and reflecting the fact that, in that story, the alleged drug traffickers knew those rules.

But you don’t need to use the most complex language for concepts that anyone can understand. So that’s how I think it works in our reporting. But it’s not me trying to flex for people who don’t watch the show. Indeed, the first rule of journalism is the first rule of Hip Hop, which is if you’re not keeping it real, no one’s gonna respect you anyway.

Indeed. As we wrap things up, who are you listening to these days?

I mean, it’s a great question. I was checking out the new Weeknd album. I just started checking out Leikeli47 as a new voice. I’ve been listening to Young M.A, who may join us on the show. I still am like everybody else, always keeping up with whatever Drake’s putting out. I like Future’s Super Slimey. Khalid and Frank Ocean are obviously doing amazing things in that space between Hip Hop and soul.

I’m thinking about my playlist, like things that I’ve been putting on. DJ Premier and A$AP Ferg have a great song, “Our Streets.” I’ve been listening to Dave East. Huncho Jack is interesting. And there’s some random songs, like singles from Baka Not Nice and that “1942” song by G-Eazy. It’s just got one of those beats where you’re like, “Wait, this could’ve been released 15 years ago.” Sometimes, when the new stuff sounds old, in a good way, you’re like, “Oh, what is this?”

Definitely. Well, I appreciate you taking the time. Is there anything you’d like readers to know, or maybe let ’em know what’s your favorite album of all time?

I don’t know if I wanna commit to that. That’s like pressing Lil Xan to talk about Tupac, and then no matter what you’d say, you’re gonna get in trouble. [laughs] But no, I mean look, I love your site. I love when you guys are keeping us … you know, I rely on you guys, Rap Genius and other sites to learn about what’s going on.

The Beat With Ari Melber airs weekdays at 6 p.m. eastern on MSNBC.