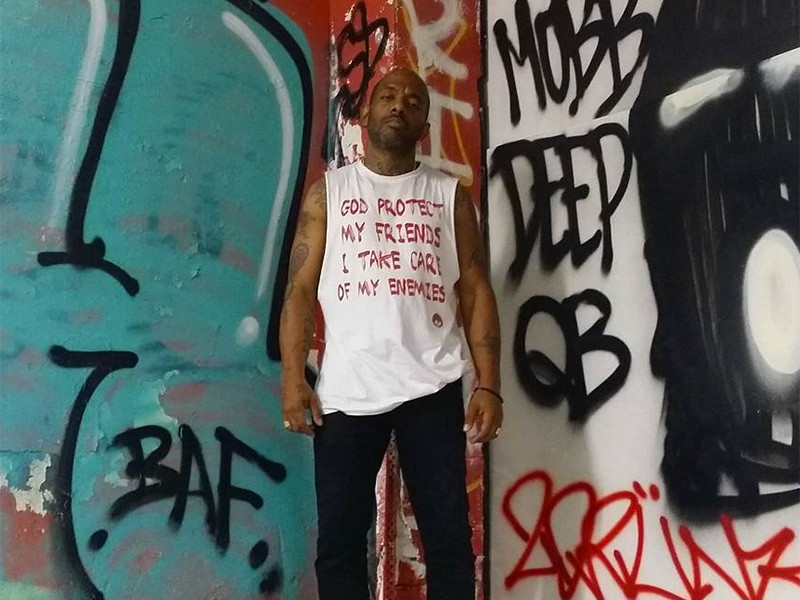 Prodigy's Last Days As Told By Some Of His Close Friends

Mobb Deep MC Albert “Prodigy” Johnson passed away Tuesday (June 20) and as the news spread, an eruption of sorrow rippled throughout the entire Hip Hop community. Those close to him are devastated, but Hip Hop fans are also feeling the pain stemming from his passing.

The Queens native was in Las Vegas, Nevada at the time of his death, where he had performed with the Art of Rap Tour on Saturday (June 17). The heat was a scorching 114 degrees, which some think could have played a part in his death. Statik Selektah, who had been working in the studio with Lil Fame of M.O.P. on Monday night (June 19), got a text from Prodigy saying he was in the hospital.

“I want to protect his privacy to a certain amount, but people know he’s been battling sickle cell his whole life,” Selektah explains to HipHopDX. “I guess Raekwon told him Saturday he needed to sit down. I guess he wasn’t feeling good. He was telling everybody he wasn’t feeling good. The heat out there was like 114 degrees. I think that had a lot to do with it and he ended up in the hospital. I’m going to wait for an official statement, but it’s obviously related to sickle cell. He was fine yesterday [June 19].”

Legendary New York City radio DJ Chuck Chillout was also on the bill that night and is still in shock it wound up being the last time he’d ever see Prodigy alive. Their friendship goes back to 1985 when Mobb Deep was still a trio.

“I opened up for the Art of Rap show on Saturday,” Chuck Chillout explains. “I played and then we brought out Mobb Deep. I saw P and said, ‘What up son?’ and I gave him a pound, not knowing that would be it. I was asking Havoc where Prodigy was, but he didn’t know. We thought he was taken to the hospital.”

The Art of Rap festival organizer Mick Benzo, who’s also Ice-T’s East Coast manager, was unaware anything was wrong with Prodigy. He said Mobb Deep took the stage about 9 p.m. and Ice-T wanted to watch the show, but had to do a fan meet-and-greet, so he was unable to stick around. Prodigy and Havoc were scheduled to do a meet-and-greet after their performance as well, but it didn’t work out that way.

“Their security guard Big Tim said Prodigy didn’t feel good, so Havoc said he’d do the meet-and-greet,” Benzo explains. “I see Havoc standing there, but he doesn’t look like he’s happy. Maybe he’s upset he’s not doing the after show or maybe he knew his dude wasn’t feeling good. The heat was over 112 out there. It was very, very hot. He performed so well, you wouldn’t know he was feeling bad. The only way you’d know was that security said he wasn’t feeling good.

“Prodigy did what he did best,” he adds. “He hit the stage and gave his all because that’s what he loved to do. Music is his life and performing is what he did. The man was destined to do what he needed to do before he left the earth. His job was rapping. He was giving it all he got no matter how he felt. Off stage, he’s always been very quiet. You’d never know if anything was wrong with him.”

“We had to postpone the ‘Peer Pressure’ video shoot because of P’s sickle cell anemia,” Gonzalez recalls. “When you have that kind of disease and are dealing with this industry, you have to have someone in your corner that tells you when it’s time to turn on your off switch. He wasn’t feeling good and the directors wanted to keep going and I was like, ‘No, we can’t with what he’s got.’

“To me, he shouldn’t have been in Vegas performing outside in the heat,” he continues. “That right there alone — anyone in their right mind who was working with them should have suggested they bypass this particular city. There’s no need to have these guys out there with that type of temperature. An inside venue like MGM could have accommodated that easily, but I understand it’s a business.”

Prodigy’s passing is a deep punch in the gut to Hip Hop culture. He will be sorely missed by all who knew him and those who ever celebrated his music. Public Enemy’s Chuck D likened Mobb Deep to one of rock’s greatest groups while Pete Nice of 3rd Bass called it a “great loss.”

The Art of Rap Festival in LA! #RestInBeats #Prodigy #MobbDeep

“Mobb Deep are like the Pink Floyd of Hip Hop in that they do completely unexpected, different things with their mics and music,” Chuck D told DX. “Prodigy and Havoc were brilliant at the narrative of their environment.”

“The premature passing of Prodigy is a great loss for those close to him and for Hip Hop in general,” Pete Nice adds. “He was one of the select group of lyricists who was nurtured in the golden era and carried on that tradition for a new generation of MCs and fans of the music.

O.G. Bronx DJ Busy Bee Starski was also in Las Vegas over the weekend and fortunate enough to spend some time with Prodigy before he died, but he didn’t imagine he’d be saying goodbye so soon.

“I just can’t believe it,” Starski says. “We was just together at the Art of Rap show in Vegas. I was thanking him for wearing my new Busy Bee shirt. I will never forget that and I’ll never forget him. Prodigy is a real MC. Rest in peace.”