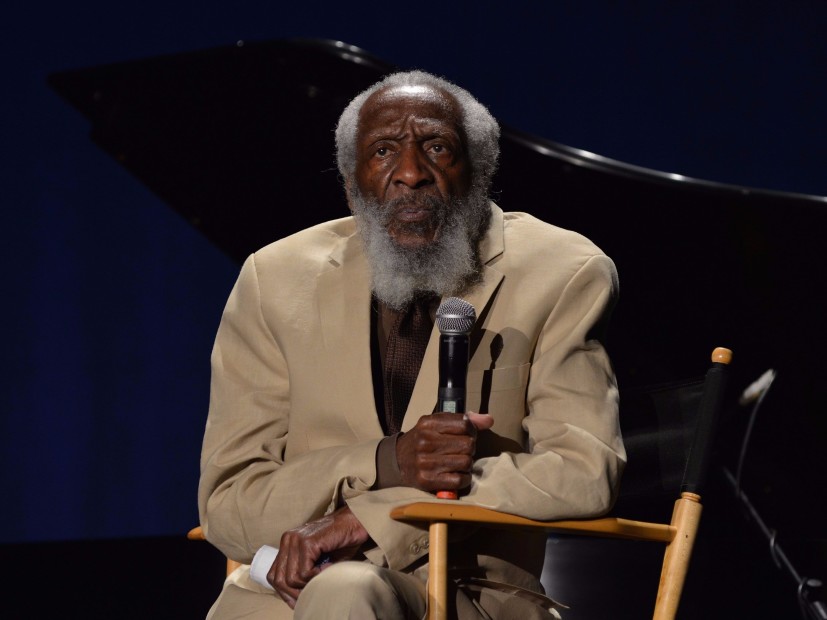 Washington, D.C. – Trailblazing comedian and civil rights activist Dick Gregory has passed away at the age of 84. His son, Christian Gregory, posted the news to his father’s Facebook account on Saturday night (August 19). Although details are scarce, earlier this week, the elder Gregory had been hospitalized in Washington, D.C., which is where his earthly journey ended. The cause of death was reportedly heart failure.

“It is with enormous sadness that the Gregory family confirms that their father, comedic legend and civil rights activist Mr. Dick Gregory departed this earth tonight in Washington, DC,” Christian wrote. “The family appreciates the outpouring of support and love and respectfully asks for their privacy as they grieve during this very difficult time. More details will be released over the next few days.”

On Thursday (August 17), his family was optimistic he’d be going home. Christian took to Instagram to offer more insight into the situation and ask for “healing.”

“In advanced age a simple cold or a simple infection could be catastrophic,” the caption read. “At soon to be chronologically 85, my father’s true age far exceeds that. A life well-lived but heavily sacrificed, has definitively taken its toll. Laughter is truly good medicine. I’ve watched my father for a lifetime heal the world. Today he is need of your healing.”

My father, Dick Gregory remains hospitalized with a serious but stable medical condition. His prognosis is excellent and he should be released within the next few days. After feeling ill last Wednesday (August 9th) Mr. Gregory was taken to the hospital. He was evaluated, treated and released. Showing only minimal improvement we returned him to the hospital Saturday (August 12) he was evaluated and admitted. Balancing a fine line between privacy and his friends and fans (who are his extended family) right to know. We have and will always gladly and freely share this gift with the world. When it comes to sickness and disease one's age is highly significant. There is no such thing as a "simple" condition. In advanced age a simple cold or a simple infection could be catastrophic. At soon to be chronologically 85, my father's true age far exceeds that. A life well-lived but heavily sacrificed, has definitively taken its toll. Laughter is truly good medicine. I've watched my father for a lifetime heal the world. Today he is in need of your healing. We are truly grateful for the phenomenal care he has been receiving. My family and I remain thankful for all of the prayers, positive thoughts, messages and good energy. Most appreciatively, Christian Gregory

Sadly, he didn’t pull through.

Born in 1934, the Midwest native moved to Chicago, Illinois, where he started doing stand-up comedy in segregated comedy clubs. In 1961, he got his big break when he was asked to fill in for white comedian Prof. Irwin Corey at Chicago’s Playboy Club, becoming the first African-American comedian to perform in a white comedy club.

In 1962, he was asked to perform stand-up on The Tonight Show, but the former high school track star said he wouldn’t do it unless he could have a sit-down interview with host Jack Paar after his routine, something a black performer had never done. His wish was granted and his career exploded with success as a result.

During a time when America appears more divided than ever, the loss feels particularly profound. HipHopDX reached out to several members of the Hip Hop community to get their thoughts on Mr. Gregory’s legacy, including A Tribe Called Quest’s Q-Tip, MC Lyte, Bun B, Chuck D, Just Blaze, Nick Grant and Styles P.

Just Blaze: “I didn’t understand his significance until I was much older, but he influenced one of the greatest rap records of all time. I just happened to have a part in it.”

David Banner: “Mr. Gregory was one of the greats he can not be replaced. I don’t know what to say. Damn!”

Chuck D: “Dick Gregory! Came to my U Adelphi in 1984. Turned me out in speech. Did events with him. Fixed my sprained ankle. My Dad last words to me was about him.”

Nick Grant: “A necessary voice for people of color. A very righteous person in which I learned a lot from through interviews and comedy. He gave a different perspective to very significant situations. He will truly be missed.”

Q-Tip: “RIP to the master teacher, the sage satirist that is Dick Gregory. Your art and introspection remains untethered. May your transition be light and wonderful. Thank you.”

Styles P: “Long live the legend. He may not be with us in the physical anymore, but energy never dies. The laughter and knowledge he delivered will be forever embedded in us.”

MC Lyte: “There was, is and never will be another like Mr. Dick Gregory. He was a courageous freedom fighter who held the torch for many generations, providing light and insight into the history of this nation. He was absolutely fearless in his mission to inform and educate us all as he continued to fight for equality for all mankind. He was a source of truth and I am deeply saddened by his passing. Mr. Gregory will forever be missed.”

Bun B: “Today is a sad day in the world. We’ve lost a warrior, teacher, gentleman, spokesman and life long fighter for the common good of mankind. In this time of racial division and separatist movement, we need the Dick Gregorys of the world to show us how love and compassion rules over all. He will be missed.”