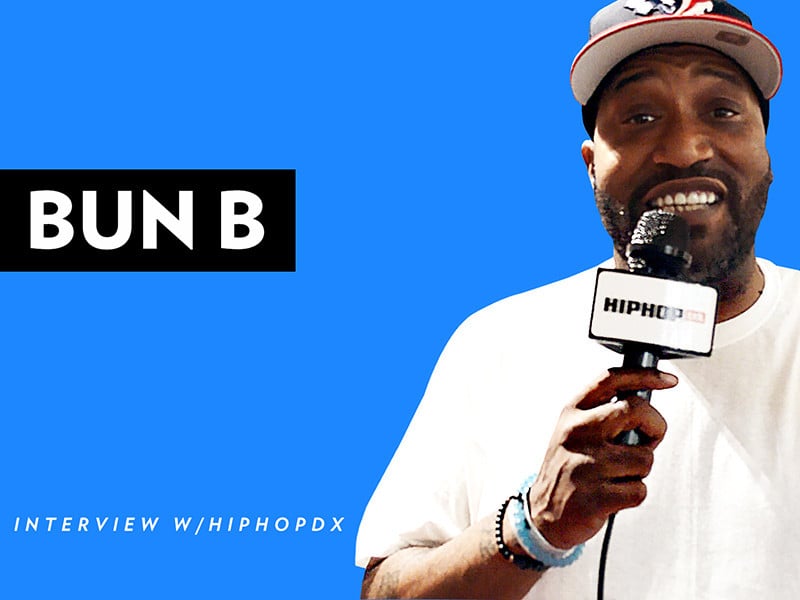 Bun B On Recruiting Big K.R.I.T. For New Album & The Evolution Of Trap Music

When people think of Bun B, phrases like “Texas icon” or “Hip Hop legend” likely come to mind. There’s no doubt the former member of UGK (RIP Pimp C) made a lasting impression on the culture with timeless tracks such as “Murder” and “Int’l Players Anthem.”

Just when it seemed like the originator of the “trill” movement (real name Bernard Freeman) was done making music, he’s returned. At this year’s SXSW, the annual music and film festival held in Austin, Texas, HipHopDX had the pleasure of catching up with the Port Arthur, Texas MC to discuss his current endeavors, including his forthcoming album.

His performance at the Grammy Block Party (presented The Recording Academy® Texas Chapter) was evidently not a coincidence. With nothing but smiles, Bun B revealed how he landed on the bill as the only Hip Hop act alongside Hanson, Los Super Seven and Randy Rogers Band.

“First year member Grammy Award,” he explained. “Kind of threw myself at the feet of the Texas chapter and was like, ‘Please let me perform at the Block Party this year.’ I wanted to show them I appreciated being let on board this year. This is a way for me to introduce myself to literally hundreds of other Academy members in one room. And why not do that in Texas, right?”

Headlining the festivities at the Four Seasons Hotel Lawn, the Trill O.G. wordsmith revealed how he decides what songs to perform and that it’s all about the crowd.

“It depends on the room,” he explains. “A lot of times people aren’t ready for certain songs. I’ll do songs tonight what would probably get different responses in different rooms in Austin. That being said, I see a lot of Texans out there and I’m pretty good with them, so songs about Texas — ‘Draped Up’ — I think I’ll be alright today.”

Considering “Draped Up” and “Get Throwed” came out in 2005, it’s natural to wonder if Bun B feels it’s more difficult to make music now versus 12 years ago. To him, the challenge is getting his music heard.

“I don’t think it’s harder to make music,” he answers without hesitation. “The process of making music is easier, the process of making music with other people is easier. The process of being heard through all the millions of songs getting released a year — that’s what’s harder. Every artist has the same outlets available to them, so it’s really all about who figures out how to manipulate them in the best way to expand their brand. Everybody has YouTube. Everybody has all these different social media outlets, but people use them differently. It’s all about how you use it and manipulate it to best benefit you.”

Luckily for the Port Arthur native, his four-year hiatus is over now that he’s separated himself from his record deal. His last album, Trill OG: The Epilogue, came out in 2013.

“I’m making an album now,” he said. “I’ve been stepping away from the game for a while. I didn’t have a record deal anymore, so for me, it was refreshing to be in the position to make music because I wanted to not because I had to. Because I was signed to a record company. Because I took an advance from a record company. It’s really about the freedom of being able to record, so for a while I just didn’t record at all. And just laid back, watched my grandkids grow up.”

With fatherhood at the forefront, he admitted it took a little nudge from his wife to get things rolling.

“One day, my wife tapped my on the shoulder and she was like “Uhh, professor, you still have a day job,'” he said. “So we got back in the lab and it’s been going amazing.”

His new album features another Southern rapper, Big K.R.I.T., who also cut ties with his record label almost a year ago.

“I’m using actually Big K.R.I.T. as my musical coordinator,” he says. “So he’s been doing production on the album. He’s been actually singing on the album, but more importantly, help to kind of craft a sound of my own.

“This album is crazy,” he continues. “I don’t think people are really gonna have an idea of what I’m coming with. There’s going to be songs from me that you would expect but there’s going to be a level of depth that I’m going to in these songs. I’m thinking of naming this album after my real name, Bernard, because this is a side of myself that took basically 43 years to get to and to really be able to lay everything out. This is what everything has been, this is what everything will be.”

Despite trap music’s negative rep among some veterans in the game, Bun had some positive things to say about the genre’s evolution and explains he doesn’t consider trap music disrespectful to trill music.

“I think it’s amazing to see how broad it’s expanded,” he says. “I think the bridging of the gap between trap and EDM really changed everything. When you think about garage, grime, all of these musical movements, and bring trap into that, they’re all based on that singular bass sound. So once you have that in the musical structure, there are so many different genres of people that are receptive to that particular sound. Trap was something that just basically took a form of music that everybody was listening to, added a few elements that weren’t natural to that music and just blew it out.

“If you’re not in the trap, you aren’t trill anyways, so it’s all good,” he adds. “Trill music is really about truth and honesty. Just cause you’re trill doesn’t mean you have to be a gangsta or a thug, or anything like that. You just got to be true to who you are. You don’t have to be a gangsta to be trill, just be real.”

Bun B also has no problem claiming he’s one of the best in the game and feels no need to be humble about it.

Later in the interview, he also speaks on what he wants his legacy to be, why he’s not on social media and the notion that “good music sells itself.”

“I’m one of the few people that was actually here to sell music before social media,” he says. “My core fan base are not necessarily people whose lives revolve around social media. So I actually have to do more hand to hand and be more vocal, letting them know, ‘Hey my album’s out here.’ But with that being said, no I don’t think it’s impossible to sell music. I think a lot of people are trying to sell music that have every social media outlet in the world, but their music is garbage, so it won’t sell anyway. I think good music sells period.”

Watch the full interview above and check out Bun B’s new single, “Gametime,” below.