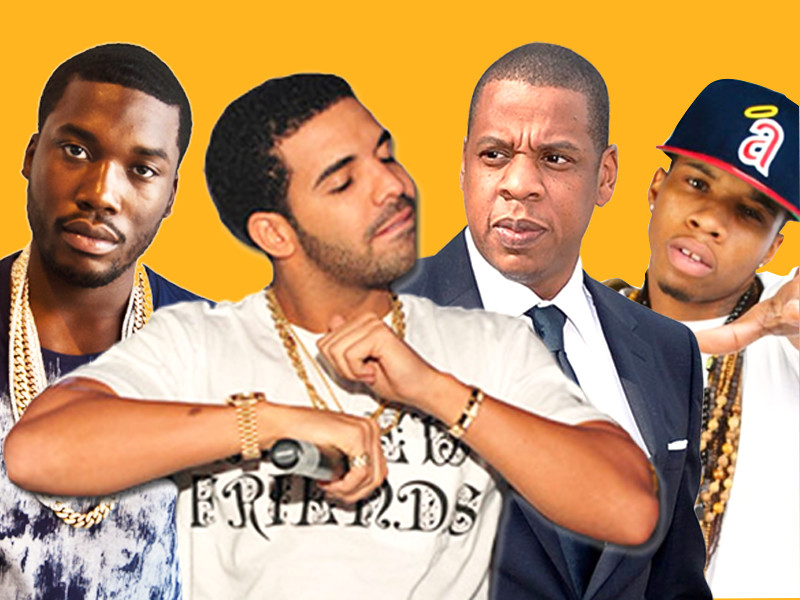 Who's Drake Dissing On "More Life?"

With this new playlist, Drake has mostly avoided calling out his rivals’ names directly, which kind of makes sense, since as the #1 artist in the world right now, it’s like he knows that addressing anyone by name only gives them the attention they’re seeking.

Instead he seems more interested in providing a spotlight to artists he actually enjoys, giving high-profile features to two artists known more in the U.K. than stateside: grime rapper Giggs and soul singer Jorja Smith. South African DJ/producer Black Coffee also gets a listed feature on “Get It Together.”

But for anyone willing to break down the lyrics line for line, the shots are there, typically without the need for much reaching. As Joe Budden proved with “4PM In Calabasas” during their beef last summer, anyone that Drake puts in his sights knows it, even if the rest of the world doesn’t.

With More Life, Drizzy has likely maintained his spot at the top of the Hip Hop/R&B/Pop pile with a project that will be received better by critics than VIEWS was, and is expected to do huge numbers, even as a digital-only release.

Here’s a breakdown of some of the shots Drake sent flying at his opponents on More Life.

How you let the kid fighting ghostwriting rumors turn you to a ghost?

At this point, Drake probably just disses Meek Mill out of habit. With the lyric above, from playlist opener “Free Smoke,” Drake digs up the coffin he buried his Philly rival in with “Back To Back” to drive one more nail into it. Drake has apparently retired that Grammy-nominated song, which is a reasonable explanation for why he had to put together some new jabs.

On “Can’t Have Everything” he brings up the subject again, rapping:
Niggas tried to serve me up a cheesesteak
I gave them back a clean plate

The cheesesteak reference is obviously to Philly’s favorite artery clogger, with Drake metaphorically “eating” Meek in their battle. He even loops in Meek’s label boss Rick Ross in the song, threatening to reignite the fire whenever they’re ready: “Tell your big homie I’m all for going there again/ He ain’t even die and I ball with his inheritance.”

With Rick Ross waging his own war of words with Birdman on Rather You Than Me track “Idols Become Rivals,” Drake seems to have involved his “Aston Martin Music” collaborator in the clash just after Ross played up his own role as peacemaker on RYTM‘s “Triple Platinum,” rapping that he “had a phone call with Drake so we could fix the madness.”

And the Meek disses don’t stop there.

Drizzy keeps going with more targeted insults on “Lose You.”

All you did was write the book on garbage-ass Rollies
Ego stroking, picture posting
Claiming that you’d do it for motivational purposes only, but you just had to show me
See I know because I study you closely, I know when somebody lying

Drake frames Meek as someone with more flash than class — in stark contrast to his own “world-class finesse” — and makes reference to “motivational purposes,” a phrase that Meek used previously in his IG profile description and tweets.

For motivational use only! http://t.co/pytJpYtbV7

Drake’s beef with Tory Lanez has been simmering for a while, with the Toronto rivals trading shots both subtly and unsubtly over the years. Lanez, as a rising star and considered by most as the #2 MC out of Toronto right now, has everything to gain by holding his own in a conflict with “The 6ix God,” and Drake gives him more material to fire back at on playlist-closer “Do Not Disturb.”

If we do a song it’s like takin’ my kids to work with me
You overnight celebrity, you one day star
Swear I Told You that I’m in this bitch for eternity
I am a reflection of all of your insecurities
Behind closed doors, a lot of 6 God worshipping
Done talk now, ’cause there’s other shit that’s concernin’ me

In the More Life lyrics Drake positions Lanez as his son, making sly references to his birth name (Daystar Peterson), his latest album’s title (I Told You), and possibly one of his songs (“One Day”).

In “Free Smoke,” the opening track of the playlist, Drake addresses many of his recent headlines, including his probably-not-just-rumored-at-this-point fling with J-Lo, his disagreements with Meek and the ongoing cold war with Jay Z.

The line referencing Jay Z isn’t necessarily a haymaker, but more of a meta-subliminal, where he calls back to Hov’s advice for him on their 2010 joint effort “Light Up” to avoid rivals who would try to “distract” him with “silly rap feuds.” Drake took the crown specifically by ignoring that advice, winning his rap feuds in spectacular fashion and eventually trading jabs with Jay Z as recently as last month.

The song can be seen as a warning to all future challengers (including Jay), basically telling them that if they want free smoke, they can get it — although it might end up costing them something once the battle’s over.

Drake kicked off promotion for the project with three songs, among them “Two Birds, One Stone,” which made headlines for its slights against Pusha “You Made A Couple Chops And Now You think You Chapo” T and Kid “You Were The Man On The Moon, Now You Go Through Your Phases” Cudi.

But the track ended up on the cutting room floor of the final playlist, possibly because of the blowback Drake faced for kicking Cudi when he was down and probably because those fires have mostly been extinguished (until they flare up again).

[UPDATE: Oh wait, it looks like Drake did go at Kid Cudi in “Free Smoke” with: “Niggas moves so waste/ Please come outside the house and show yourself/ So I can say it to your face,” referencing Cudi’s rant on Twitter.]

Likewise Joe Budden hasn’t popped up on Twitter with any critiques or conspiracy theories about the project yet, but maybe he’s saving his thoughts for the next episode of his podcast.

For more on Drake’s More Life playlist, check out DX’s video below.