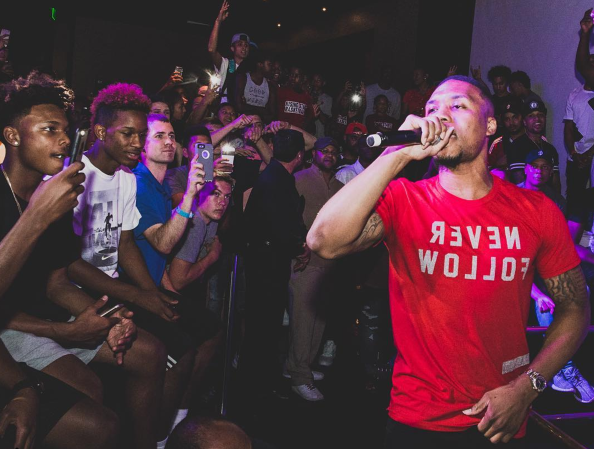 by Trent Clark
7
Portland, OR -

Birdman showed Damian Lillard a motion of mercy as the NBA superstar gets to keep the Lil Wayne-assisted track “Loyal to the Soil” on his debut album, The Letter O.

The Portland Trailblazers point guard, who raps under the name Dame D.O.L.L.A., shared the good news on Twitter after initially claiming that the Cash Money machine was forcing him to remove the song. Lillard thanks Birdman, Cash Money co-founder Slim Williams and Mack Maine for letting him keep the track.

Thanks to Birdman, Slim and Mack Maine for their help making this happen.

Lil Wayne and Birdman have been publicly feuding since December 2014 when Weezy tweeted that he wanted off Cash Money and nothing to do with the label because he claimed Birdman was blocking the release of Tha Carter V. Two years later, Wayne has engaged in plenty of battles in the courtroom and on the mic.

Meanwhile, Lillard started the NBA season off with 68 points and 19 rebounds as the Trailblazers have split their first two games.

HipHopDX gave The Letter O a 3.4 out of 5 rating with Editor-in-Chief Trent Clark saying, “Even with the currency-induced nickname, D.O.L.L.A. and his pristine alto vocals are never flashy, as he keeps his rhymes clear of parental advisory flags or any over-the-top innuendos. (A feat NBA Commissioner Adam Silver can surely appreciate.) Kiddos can aim to be like Dame through his high-wisdom lyricism.”

(This article was first published October 25, 2016 and is as follows.)

Fresh off the release of his debut album, The Letter O, Damian Lillard is already dealing with disappointment ahead of the tip-off of the 2016-2017 NBA season. Just as his Portland Trailblazers were set to square off against the Utah Jazz, he got the official word that his Lil Wayne feature on the song “Loyal to the Soil” would have to be nixed.

Although he didn’t specify the identity of the powers be who were altered his tracklisting, anyone who has been following Lil Wayne news this year can easily pinpoint to the culprit(s) to be the house Birdman built.

“Unfortunately, I am being forced to remove Lil Wayne from #TheLetterO track “Loyal to the Soil”. Despite my agreement with Wayne, his parent label is forcing me to remove him,” Lillard wrote on Instagram.

As of press time, the track remains intact on streaming services as is but the Weezy removal process could happen as early as tomorrow morning. The rift between Wayne and his former label hub has been particularly cold this year with no signs of either side warming up to any sort of agreement.

In May of this year, the Young Money head honcho shut down all talks of resolution because he deemed the money to be funny and ironically in terms of this latest fiasco, he used pro basketball talk in a recent ESPN interview to describe his CMB hardships.

“Everything I’ve done for them, they wouldn’t be them without me. But I’m off the team, so it’s, ‘Screw him as long as we can, make sure we’re going to screw him as much as we can, and when we can’t no more, let’s see what happens to him.’ That’s what it looks like they’re doing to [Miami Heat center Chris Bosh], and I hope he make a comeback.”

It seems Dame D.O.L.L.A. just got in the middle of the beef. And while we’re on the subject, how come Cash Money re-signee Juvenile gets to stay on the album?