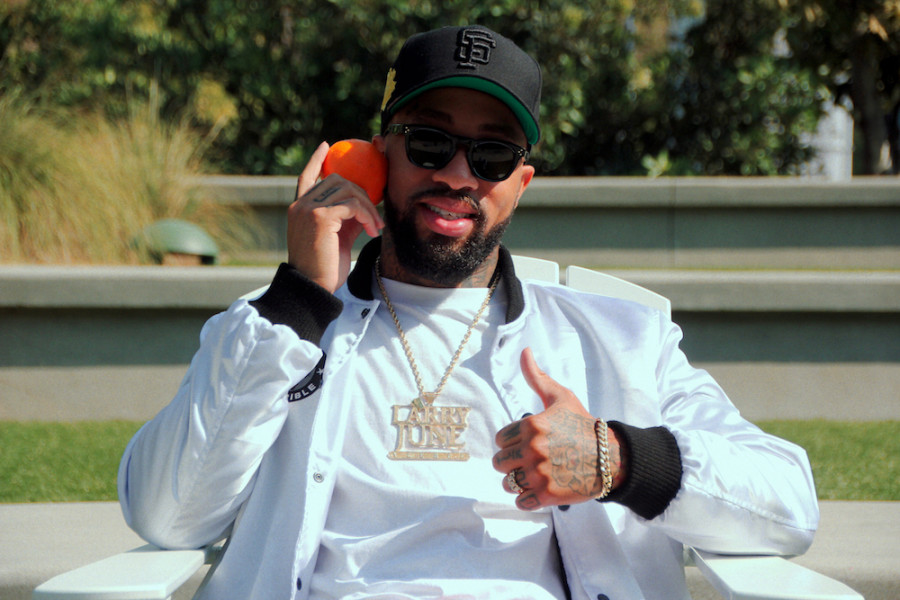 Larry June Is Developing His Music Career & Own Brand Of Oranges

Lots of rappers are known for their green thumbs. Wiz Khalifa sells a strain of weed called KK (that got him into trouble with Kanye), Kurupt has Moonrock, and Ghostface is hawking Wu Goo hash oil.

June caught some interesting looks this year while also dropping a handful of projects, including EPs Larry and Orange Season with Spanish production duo Cookin’ Soul. Then there was the full-length mixtape Sock It To Me he kicked the year off with.

Outside of the constant push of music releases, he’s managed to earn the respect of peers ranging from Post Malone and OG Maco to G-Eazy. A few months back, he secured a deal with Warner Bros. while he was already on a tour of the States with Asher Roth. That deal was spearheaded by label A&R Quinn Coleman, A.K.A. Trillectro co-founder Spicoli. (Trillectro is a Maryland-based event where Kid Cudi recently debuted his Pharrell collabo).

HipHopDX caught up with the Georgia ->Bay Area transplant as he shot promotional videos at Culver City’s YouTube Space near L.A.

June’s growing fan base loves his off-kilter sense of humor, which often is demonstrated by his passion for citrus. All three of the projects mentioned above feature some reference to his favorite fruit: oranges.

When June released Orange Season earlier this month, it was accompanied by an iOS game inspired by his love of Nintendo’s early 8-bit era. As he works on more music and prepares to open on Malone’s Hollywood Dreams Tour in September, he’s developing his own brand of oranges.

That’s right, the Whole Foods advocate has his mind set on entering the agricultural grind.

Plans To Start His Own Orange Brand

“I’m coming out with my own orange. I’m going to grow my own oranges and get my license together. I’ve been working on my stickers to put on it. I’m staying ahead of the game. I’ma do the weed too. It’s all good. I got a couple orange plugs. I ain’t going to use them unless it’s big bulks. When I need the real bag, I’ll holler at him. He there. It’s in the plans and they’re coming soon. My homie has a family that farms and he came up with the idea to have my own orange. I’m getting the necessary paperwork together. I’ve been so busy, but I’m in the process right now. You got to go through health shit and make sure it’s able to be sold. I got a plan. I can only give you two percent of that plan right now.”

“It has the most Vitamin C and you must stay healthy on a punk bitch. Keep them muthafuckin colds away because a nigga do not want to be sneezing. That’s how we going to do it. I always kept an orange on me. A four five and an orange. My orange was a just-in-case snack. An orange can be used for two different utensils. An orange can be a snack that you can eat or you can make orange juice. Might be in the trap with a cup and might want to [makes squishing noise].”

“You know. Mob shit. Keeping it simple. Trying to stay out the way. I’m a hustler. I signed up for Lyft before it was the holiday season. Everything get slow. The trap gets slow. Niggas buying Christmas gifts and I did a lot of spending. I need some just-in-case money so I signed up for Lyft. I started driving until the trap started jumping again and I made a killing.”

“That comes from excitement and being happy. I ain’t in jail. I’m healthy and I can still run faster than my son. I’m happy. Yeehee, yes Lord, sock-it-to-me. My ad-libs aren’t inspired by no one else but myself. If anything, it’s inspired by stuff like The Five Heartbeats. That’s how they turned up crazy with the women having the little squirrel in their head. And the squiggly hair thing. I listen to a lot of Bootsy Collins and Michael Jackson.”

Being Inspired By Both The Bay & Down South

“I spent ten years of my life down South. I was raised in Riverdale, Georgia. That’s how I know everybody out there. It’s two different sounds because I lived in two different areas. I was in Atlanta during the mid-2000s. When “Knuck If You Buck” was poppin’ and we were doing mosh-pits. When niggas started swinging and shit. I came to the Bay Area and saw my first Chinese person in person. I thought they were all on movies. I was a big Bruce Lee fan. Shout out to them too.

It was two different lifestyles. Different weather, different culture, different bitches. I always visit my mom and stuff in Atlanta so I always know what’s going on. I came up listening to Atlanta music from Jeezy to T.I. I listen to Bay Area music too. There’s no swagger jacking over here. Anybody in The Bay knows me from the OGs to the young dudes. I was mobbing with the OGs first. RBL Posse, E-40, The Jacka.”

Trying Lean For The First Time With The Jacka

“I don’t do drugs, but the first time I tried lean was with The Jacka. He was a big lean sipper and that was the day I fell asleep driving and woke up in Richmond at a fat girl house. RIP to The Jacka though. The first time I was in the studio with The Jacka was at the spot called 17 Hertz in the Bay Area. We had hours of studio time booked and we didn’t record. He just told us stories about trappin’. He was real and just wanted to teach the people. He was definitely an important figure in The Bay.”

“I just wanted to put the music out because I didn’t know what was going to happen. And, things happened. I just started dropping it. I didn’t know anything about blogs and shit until less than a year ago. I just started putting stuff on Twitter and the homies started fucking with it. Once I started getting attention from the blogs, I had to keep it coming.

I wish I would have strategized more in doing it because I dropped seven tapes in one year and none of them are huge tapes. I got like 16 tapes already done right now. I’m on the business side of it now where I do everything the right way. I was just recording every day. I didn’t have nothing else to do. My mixtapes are better than niggas’ albums. Good job Larry.”