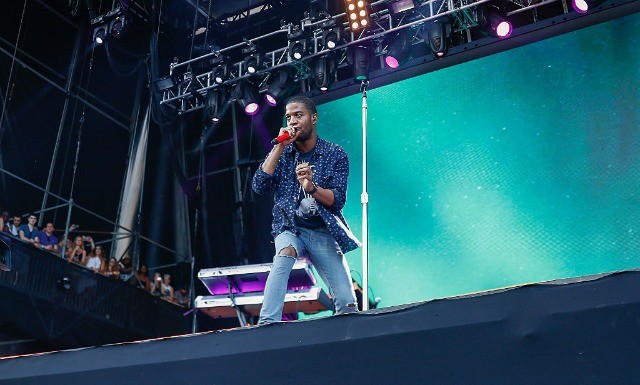 Columbia, MD – At this point in his career, Kid Cudi has all but evolved out of the pioneering mumble rapper shell he used to captivate audiences with, thanks to his early hits, “Day ‘n’ Nite,” “Make Her Say” and “Pursuit of Happiness” back in 2009. His last release — 2015’s Speedin’ Bullet 2 Heaven – was an ambitious, yet critically maligned foray into the world of punk and post-modern grunge and with the 32-year-old Clevelander’s multiple acting opportunities, it doesn’t appear that he’s too focused to really buckle down in the studio and carve out a sound body of work.

During his set at yesterday’s Trillectro 2016 at Merriweather Post Pavilion in Columbia, MD, Cudi exhibited some flash of his artistic glory days when he premiered a brand new song, reportedly named “Magic” and produced by none other than Pharrell Williams. YouTube user Charlie K impressively managed to capture the entire performance, which highlights the exuberant melody — complete with bridging horns and parading drum blasts – as the upbeat chanting showcases “Magic” was aptly titled.

It still doesn’t necessarily constitute as “a rap song,” not like that matters, especially a veteran rapper such as Pharrell dominated 2014 with his soulful pop staple “Happy.” Which was certified 7x platinum by the RIAA and crowned Billboard’s No. 1 single of the year.

The “Magic” record will expectantly lead off his recently announced sixth studio LP, Passion, Pain & Demon Slayin’, which is still slated to drop sometime this year. Despite the sounds heard on “Magic,” legendary producer Mike Dean assured the Kid From Cleveland would be rapping again in a recent interview saying, ““He’s rapping again, which is really dope…He would just jump on the mic and make a song in like five minutes.”

Cudi served as the headliner for Trillectro 2016, which also boasted appearances from the likes of Rae Sremmurd, Lil Uzi Vert, GoldLink, Jay IDK, Cousin Stizz, Larry June and several others.