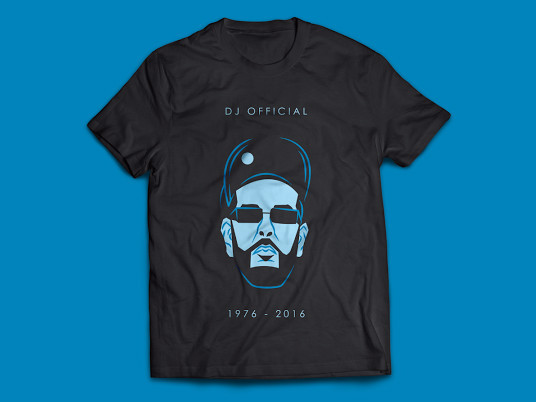 The Christian Hip Hop community was rocked with the passing of DJ Official last weekend. His funeral is today (August 20) and he will be honored by many family and friends. Many knew the producer through his groundbreaking work with The Cross Movement and Reach Records.

Christian Hip Hop site Rapzilla has designed T-shirts to honor DJ Official and one hundred percent of the proceeds will go to his family. He is survived by his wife, Teresa, and two young daughters. The black T-shirt shows the producer’s face and his dates of life on Earth. The product is available for purchase at Blacksheep Collective and costs $25 for pre-order through September 30.

Reach Records is also continuing to sell DJ Official’s Entermission album with all of the proceeds going to the family. Purchase an mp3 download of the album, which features Lecrae, Tedashii, R-Swift, Sho Baraka, Trip Lee and Thi’sl, at the label’s online storefront.

Lecrae took to Twitter to pay tribute to his friend and former tour deejay when he died after double lung transplant surgery.

“When they criticized me @djofficialdj stood up for me,” he said in a series of posts. “He got in arguments defending me. For years @djofficialdj walked with me thru all the storms negativity and gossip. When I wanted to complain @djofficialdj put it in perspective cause he battled so much and fought so hard. When I was starting off having an @djofficialdj beat was the greatest thing I could imagine. If he wanted to @djofficialdj could’ve released 10000000 albums on @reachrecords he had one planned I don’t really know what to say but honor my dude. He’s a real one. I miss you Fish. @djofficialdj You mean the world to us and We’ll make sure folks knows how much you mean to the movement so be it. @djofficialdj #116ForLife”

HipHopDX sends its condolences to the family and friends of DJ Official.