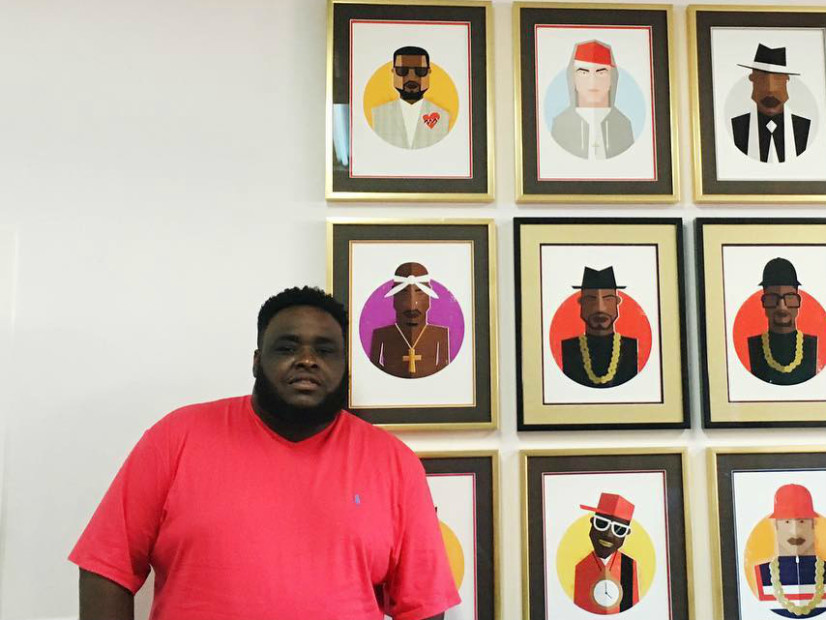 Today, the world is shaken by the news of Alton Sterling being tackled and shot to death outside a convenience store in Baton Rouge. Many have taken to social media to pay tribute to the 37-year-old in a similar way that Tamir Rice, Sandra Bland, Rekia Boyd, Eric Garner and Michael Brown were honored.

Thi’sl was among those on the frontlines of those seeking justice when Brown was killed by a police officer in Ferguson, Missouri in 2014. The St. Louis rapper held a “Let Your Voice Be Heard” forum for the community.

He didn’t stop there. A year later, nine-year-old Jamyla Bolden was shot and killed by a local man in the same city while doing homework in her bedroom. Thi’sl rallied hundreds together to honor her memory. The rapper says he is inspired by Tupac as he uses his platform to bring awareness for social change.

“The whole city was upset,” he says of Bolden’s death, “and I just felt it was one of those opportunities where I remember growing up looking at Tupac, and as much influence as Tupac had, I remember looking at Tupac and saying ‘Man, I don’t think he understands how much influence he really has on our culture and our community.’ Tupac could’ve said, ‘Meet me at the White House, I want to do a Million Man March, and the entire Hip Hop community would’ve been there. And I used to say, ‘I don’t think he sees what he can really do.’ And I know before he died he was trying to incorporate different rules and protocols to how we should treat our community, so I think he started getting it way more. But I’ve always said, ‘If I’m going to be in a position where people listen to me, then I want to use this platform to do stuff that’s going to make a difference.'”

Thi’sl sees that Hip Hop is flexing its power in the arena of politics, noting YG’s “Fuck Donald Trump” song and explaining the impact of its endorsement of President Barack Obama.

“Hip Hop put, and I will go over the edge, I can say helped, put Hip Hop put Barack Obama in office,” he says boldly. “Like I remember watching the video with Diddy saying, talking to Barack 12 years ago. And he was like ‘Yo when you get ready to run for office, let us know we gon get you in.’ And when Barack ran for office, it was the Hip Hop community that was rallying people. The amount of new voters that have never voted before, young voters they were from the Hip Hop community, and people that pushed them from the community.”

He says that the evidence of this strength can be found in pop culture from Kanye West’s influence on fashion to Sprite’s Hip Hop cans to social media trends such as “Young Metro Don’t Trust Him.”

Thi’sl ponders that the reason why rappers might not be able to fully utilize their platforms is because of fear of offending their fan bases, which are incredibly large now because of social media, or because of labels who want to control the messages that are put out into the world.

“Everybody knows that and they see that,” he says of Hip Hop’s power. “That’s why people want to tie the hands of our artists where they can’t communicate and they can’t speak the way they want to speak because they know when they speak to our culture, our generation, they gon’ listen.”

As an independent artist, Thi’sl does not have to comply with the machine of the music industry. He released his Against All Odds album with an accompanying book of the same name in March. He tells his story navigating the streets of St. Louis and finding himself being wrongly convicted for murder. The charges were dropped and This’l turned his life around.

With Ty Dolla $ign fighting for the freedom of his brother, TC, and Dee-1 and others calling for Mac’s release from prison, Thi’sl offers some advice for those who have been wrongly convicted of a crime.

“A lot of times we get into situations and we shut down because we’re so used to struggling,” he says. “It’s like, ‘Man, I can’t fight no more I’m just gone deal with it, I’ll survive.’ I would say don’t quit, man, if you know you innocent, keep fighting as much as you can and do it smart…. Hire investigators. Get tangible evidence to show that you didn’t do it, too.”

Even though this could have been the lowest point of his life, Thi’sl used his time behind bars to put his faith in a higher power.

Before he ever sold a record, Thi’sl started his career as a freestyler. Using his faith, he knows he could be a chart-topping artist, but explains why he chooses a different lane.

“I’m a street dude, I never feel like I have to justify my music because God has given me talent,” he says. “Anybody heard my music, they know I know how to make records. I grew up in the streets, I can make any kind of record that I want. I make the record that people want to hear the mass pace, but I choose not to because I have this truth I feel people deserve to hear. I feel that way because it’s an obligation for me as a person with a voice to share it with other people.”

Thi’sl has been able to transcend the “Christian Hip Hop” label, especially with his latest project and with his Heavy is the Head mixtape, which features Scarface. He says that even though he is confident in his artistic direction, he still faces many misconceptions about what he represents.

“People have a misunderstanding about what Christianity is,” he says. “Especially now in the rise of the new Afrocentric teaching, is like ‘Yo that’s the White man’s religion you stupid.’ Dudes tweet me like ‘Why you Christian? That’s White people stuff’. I’m like, ‘Well first of all the Bible was primarily written in Africa and in the Middle East. Jesus wasn’t White. You can’t walk away from the Bible and we know what history has taught us, and this and that.’ I always feel like I have to justify myself. I read all these things and this is where I land because I see it to be true, so I’m not brainwashed.”

Thi’sl has been able to take all of his experiences and beliefs to create a sound that he believes encompasses everything in Hip Hop, the fun, the raw and the truth.

“With my music, it’s just like I don’t care what people think,” he says. “Like I’ll make the positive records because I’ll even take the risk of saying those things that others won’t say inside the niche of Christian Hip Hop because people need to hear it. So if I lose people in that space for making the type of records that I make, I’m cool with that because I’m gonna gain people in another space. If I lose people in the mainstream Hip Hop space because I want to talk about some stuff that’s real. So my goal is to reach the people that wanna hear stuff that you want to put in that make you feel good, you can put in stuff that makes could get you turnt, and you can put in something that makes you say ‘Dang man I didn’t even think about that.’”