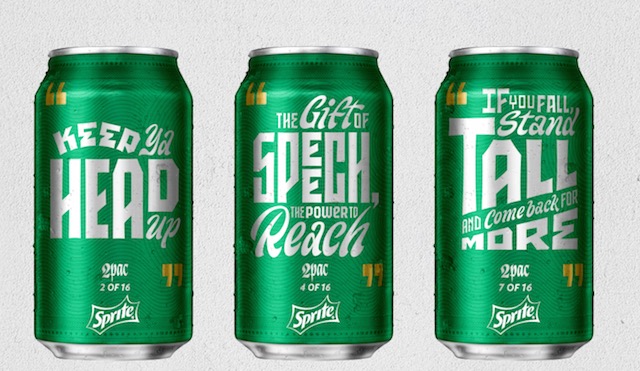 Sprite’s back at it with the soda cans.

The beverage company unleashed its first “Obey Your Verse” campaign last summer with 16 lyrics from The Notorious B.I.G., Drake, Nas and others emblazoned on the cans.

Now, Sprite continues the saga, based on its “Obey Your Thirst” slogan, and has chosen 16 more words of inspiration for Hip Hop fans nationwide. This season’s bars come from Tupac, Missy Elliott and J. Cole.

Director of Sprite & Citrus Brands, Coca-Cola North America, Bobby Oliver, spoke with Billboard about utilizing the momentum of last year’s “Obey Your Verse” campaign to push into this summer. Sprite has a long history with Hip Hop from its 1986 commercial with Kurtis Blow to its current collaborations with Drake, Vince Staples and Isaiah Rashad.

“The big takeaway for us coming out of last year was how excited fans were about us staying true to the genre and paying homage to the heritage of Hip Hop,” Oliver says. “Choosing classic artists as well as current artists led to our credibility.”

He points out Tupac’s inclusion as especially meaningful to the collection.

“It’s important for us to have an artist like that because of what he’s represented to music and the art form,” Oliver continues. “Having a heavyweight like him is important to the program.”

This year’s “Obey Your Verse” campaign is more interactive as fans can take pictures of each can and go onto Sprite’s website via their phones to win free stuff including autographed memorabilia and a concert experience. The feature runs from June 20 through August 15.

Expect to see promo for the cans everywhere soon from television and radio advertisements, digital and social spots and a special collaboration with the BET Experience at LA Live June 23 through 25.

The lyrics from Sprite’s second “Obey Your Verse” campaign are as follows:

Missy Elliott – “Cause the beat’s so cold” – from “WTF” single

Missy Elliott – “How they do it where you from?” – from “WTF” single

J. Cole – “Goodbye to the bottom, hello to the top” – from “Grown Simba” single

J. Cole – “We ain’t picture perfect, but we worth the picture still” – from “Crooked Smile” off Born Sinner

J. Cole – “I got a dollar and a dream” – from “Dollar and a Dream III” off Cole World: The Sideline Story

J. Cole – “You gotta dream like you never seen obstacles” – from “The Autograph” off Friday Night Lights