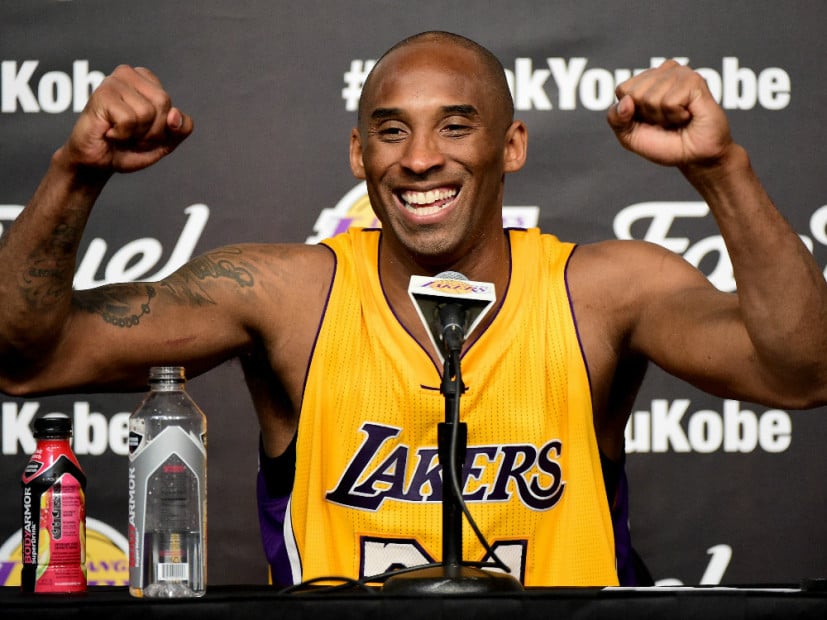 And on that, Kobe Bryant‘s 20-year NBA career came to a close yesterday (April 13). The Black Mamba scored 60 points, including two signature long-range jumpers within the final minute, to give the Los Angeles Lakers the 101-96 victory over the Utah Jazz at the Staples Center. He gave a final speech at halfcourt thanking the fans, his teammates and his wife before dropping the mic and walking away from the game.

Jay Z, Kanye West, Snoop Dogg and Kendrick Lamar were all in attendance to watch the NBA’s third leading scorer in history give his final performance.

“At the God’s last game,” West posted on Twitter with a picture of his ticket. The Chicago rapper wore a yellow T-shirt that had the words “I Feel Like Kobe” written on it in yellow.

Anthony “Top Dawg” Tiffith shared his receipt for two courtside seats to the game that cost more than $40,000. Along with Lamar, fellow TDE rapper ScHoolboy Q was also present at the game.

Those who were watching away from Los Angeles paid tribute to the five-time NBA Champion on social media.

Ice Cube shared multiple posts on Instagram, one saying “We miss you already.”

“Thank you for everything. #MambaDay,” the Toronto Raptors global ambassador says.

Travi$ Scott tweeted multiple moments throughout the game, including a meme of Bryant defending an inbound with Lecrae‘s “Co-Sign Part 2” playing in the clip, calling Bryant “un chico malo,” which means bad boy in Spanish. The Reach Records rapper retweeted the post with a smile emoji.

Vince Staples congratulated the Lakers star, but also criticized him for his 2013 rape charges and for telling the media that teammate Shaquille O’Neal paid off women to not say anything after he slept with them.

“I’ve hated you my whole life,” the Long Beach, California rapper says in one post. “Thanks for the memories lil bitch.@kobebryant @Lakers”

Bryant was drafted in 1996 to the Charlotte Hornets. He was quickly traded to the Lakers, where he spent his entire career. Besides winning five championships, he was named league MVP in 2008.

Sometimes u have2 pay 2 play..Cudnt miss @kobebryant last game for nothin in the world.. Top 5 in my book.. #TDE #24 pic.twitter.com/ZxeZ4FltAf

This is a must retweet when it comes to Kobe https://t.co/fS8kVzmqVi