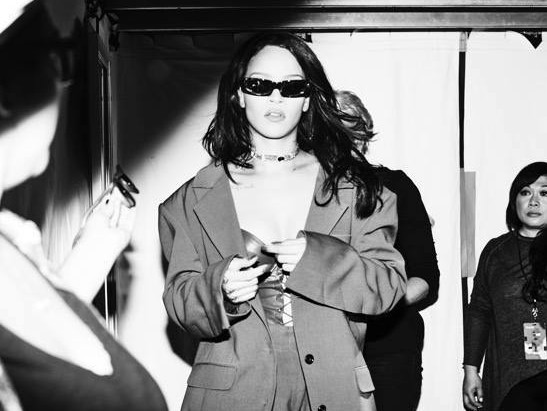 After more than a decade in the industry, Rihanna has become a music and fashion icon. Vogue honors the pop star by having her cover its April 2016 issue, her third cover for the publication.

In the cover story, Rihanna details her recent work, from her February LP ANTI to her Puma fashion line, which features a unisex look. The songstress says that she has been inspired to reach success in the male-dominated music industry because of her brothers.

“I always wanted to play the games they played and play rough and wear pants and go outside,” she says. “Women feel empowered when they can do the things that are supposed to be only for men, you know? It breaks boundaries, it’s liberating, and it’s empowering when you feel like, ‘Well, I can do that, too.'”

In regards to ANTI, which was released four years after her last LP, Unapologetic, Rihanna says that this is some of her most honest work. Speaking specifically of “Consideration,” a collaboration with SZA, RiRi understands that she might not have as much chart success with ANTI as with previous works.

“It might not be some automatic record that will be Top 40,” she says. “But I felt like I earned the right to do that now.”

Despite this perspective, the first ANTI single, “Work” with Drake, still reigns at the No. 1 spot on Billboard’s Hot 100, her fourteenth song to top the chart and second with the Toronto rapper.

“Everything he does is so amazing,” she says of Drake.

Rihanna and Drake always seem to work well together and express support for each other on Instagram. One artist that people could contrast her relationship with Drake against is Beyonce.

The two singers are often pit against each other whether from rumors that Jay Z cheated on Beyonce with Rihanna or recently with all the praise for Beyonce’s “Formation” single and then Wendy Williams saying Rihanna will not reach the legend status that the former Destiny’s Child member will.

“They just get so excited to feast on something that’s negative,” Rihanna says. “Something that’s competitive. Something that’s, you know, a rivalry. And that’s just not what I wake up to. Because I can only do me. And nobody else is going to be able to do that.”