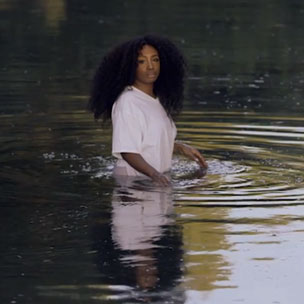 During an interview with Sway’s Universe, SZA spoke on her contribution to Nicki Minaj’s The Pinkprint cut “Feeling Myself” featuring Beyoncé.

“Yeah, I wrote parts of that,” the Top Dawg Entertainment singer says. “A nice chunk of that [laughs]. I’m on the credits, so I think it’s really interesting. It was dope meeting Beyoncé. She’s tight. She’s perfect actually.

“Um, I have no idea,” SZA adds when asked about how her involvement with the record came about. “Literally like on God it was something I could never explain to anyone. The call just got put in and then I arrived [laughs], I have no idea. Hit-Boy produced and I wrote the lyrics, so Nicki [Minaj] and Beyoncé are singing some of the things that I wrote to it. But [Hit-Boy] and I just work really well together, like we vibe together just because he’s such a cool kid. He’s not pretentious at all, for as accomplished as he is he’s just super welcoming and drinks like chocolate milk all day, honestly the nicest kid.”

SZA Updates On Debut Album, “A”

Elsewhere in the conversation, SZA offered some updates regarding her debut album, A, set for release this year.

“It’s getting there, it’s really getting there,” SZA says. “I’m just in a completely different place than I was and my show is completely different than it was. My show now isn’t equivalent to where I am writing and creating musically, but you would have had to see me at Fader Fort and then tonight to know what I mean. I’ve learned a lot and I’m more vulnerable than I once was before. I was like pretending to be vulnerable because it’s like I’m awkward naturally but I’m also very afraid to just be like all comfy because people can do all types of shit and fuck your stuff up when you’re too vulnerable. But I think at some point you have to commit and literally put your genitals to the wall like you got to just do it [laughs]. So I’m now at that point where it’s like do it or get the fuck out.”

Despite not confirming anything concrete, SZA did speak on her approach to the sound of the album, citing producers Hit-Boy and Thundercat, among others.

“‘Sobriety’ is an angling at that and I mix a lot of people that don’t normally go together there,” SZA says. “When you have people like Hit-Boy putting 808s and Thundercat adding live bass. Sounwave, Chris Calor who produced all of Isaiah Rashad’s album but all of them on one song and Terrace Martin, there’s a lot going on. I’m more committed to creating a sound so on these songs I just want to congeal moments that don’t really go together.”

While discussing her TDE labelmate Kendrick Lamar, SZA describes the Compton rapper as an artist that’s “about to change music.”

She continues: “I can’t say anything about Kendrick, but what I will say is that he is about to change music.”

“Oh I love them, that’s family,” SZA says. “It’s interesting to watch us. I remember when I first got signed it used to be like I would come out on their sets so people could get to know me. And they would be like, ‘Who’s that girl?’ and they didn’t even know me that well. But now it’s like this is the first time we’ve been on stage and spent time together, recorded together, ate together, you know sipped chai together, whatever. We know each other so it’s a whole different vibe. It’s cool. It’s like family.”