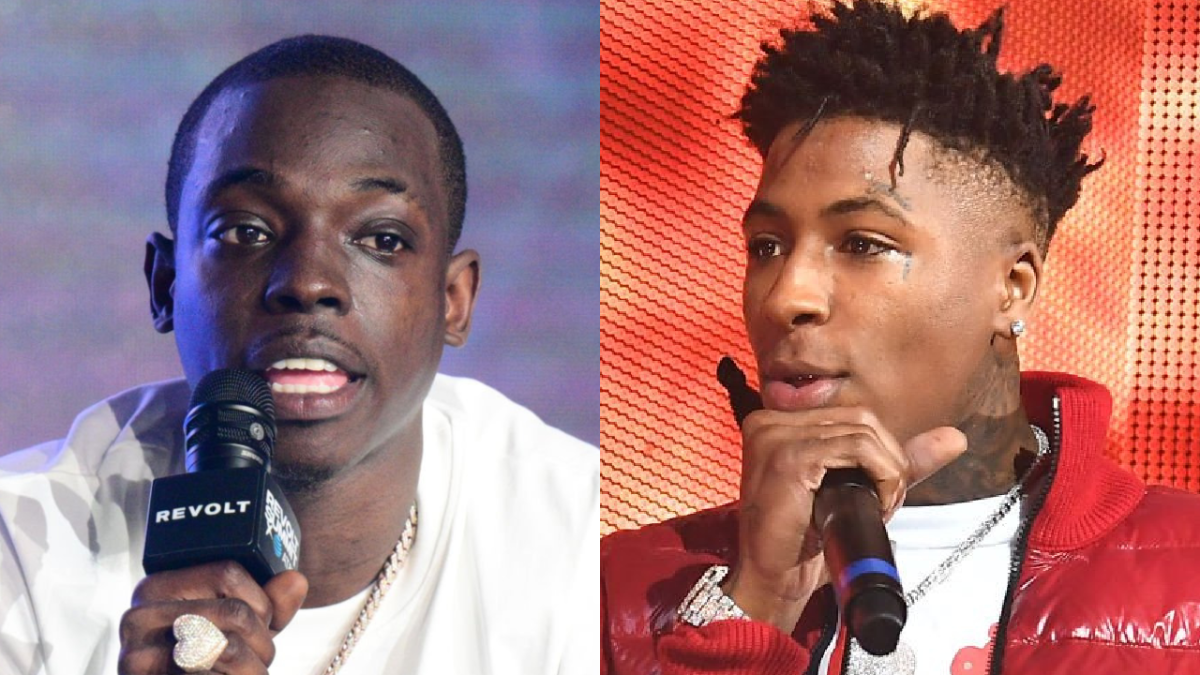 NBA YoungBoy and Bobby Shmurda got into a war of words on social media on Sunday (November 27), during which Bobby threatened the Baton Rouge rapper, along with Wack 100 and Akademiks.

The spat appeared to stem from Rowdy Rebel’s recent appearance on Math Hoffa’s My Expert Opinion, where the GS9 representative questioned the actions of King Von’s alleged killer, Lul Tim, an affiliate of NBA YoungBoy and Quando Rondo.

“Everybody that’s dying out there is because there’s no n-gga to be like, ‘Nah, my fault, I’m sorry,’” Rowdy said during the interview. “When King Von died, that Lul Tim n-gga, he didn’t have to get out of the car and start squeezing right away. You already got yours drawn.

“His mind off the rip went to kill. How you went to kill? How much hate you have already to kill this man? You feel what I’m saying? Was it the drugs? You had the upper hand but just could have seen it and said, ‘Yo chill.’ You had the upper hand and could have just been like, ‘Yo, back your n-ggas up and get your dawg outta here.’ But you already chose the murder route.”

NBA YoungBoy seemingly responded to Rowdy Rebel’s comments on his Instagram Stories over the weekend, writing: “I see why n-ggas irrelevant today[.] ‘Be trying to make all the sense thinking what they saying real but sounding stupid asf’ Just mind yo businesses[.] And stop the violence – Quando big brother.”

“N-ggas be jacking everybody other shit. What you doing? What you doing, homie?” he asked in clip posted to his Instagram Stories. “Stop telling me about your brother’s shooters and your brother’s this and you always — what the fuck do you do? Huh?! When are you finally gonna do something?”

NBA YoungBoy responded via his own Instagram Stories, calling Bobby “Von Shmurda” and a “slave.”

In a follow-up post he added: “Well talking violent[.] Help me keep the peace or just stay far away slave.” 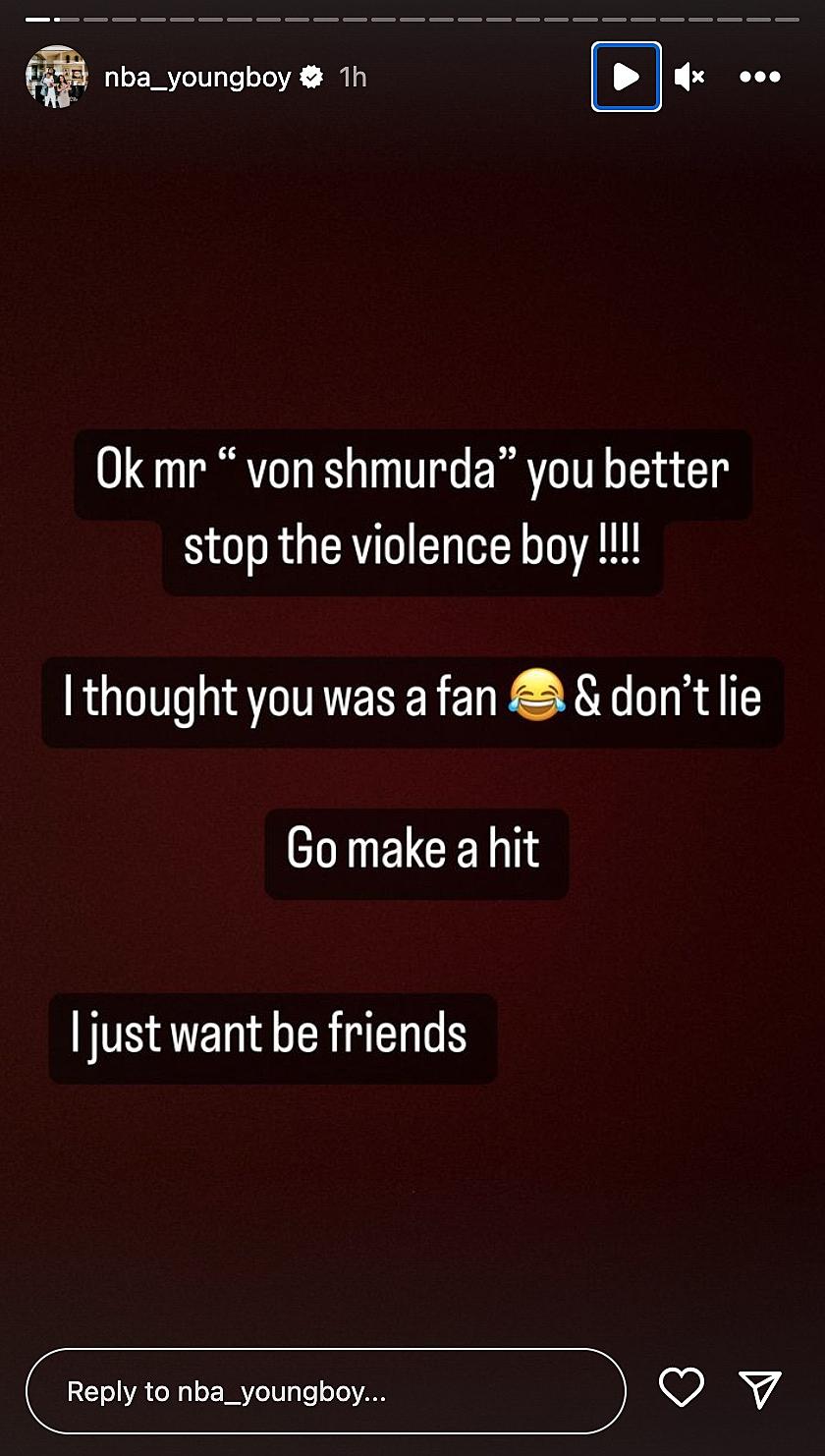 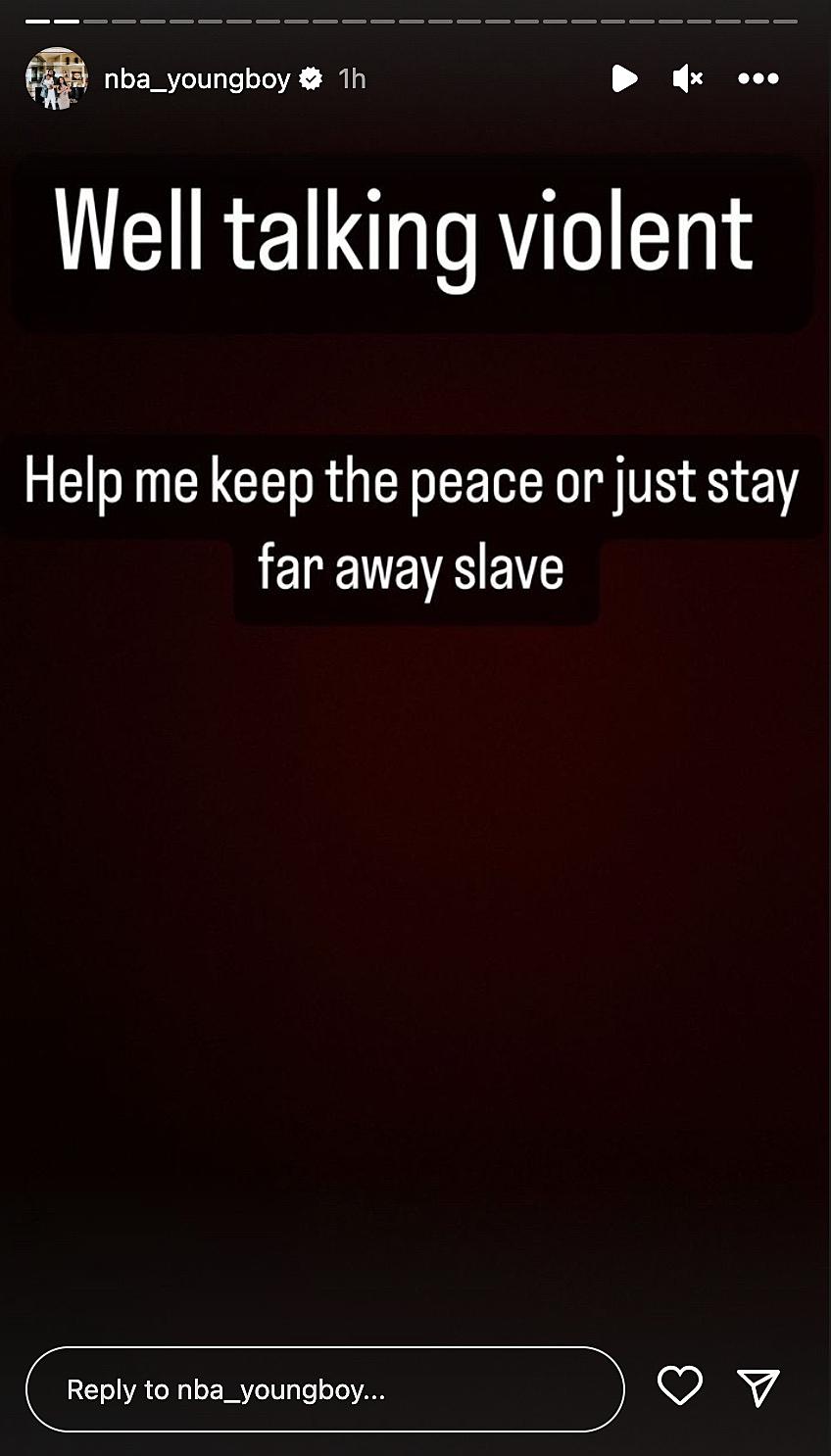 NBA YoungBoy issued a lengthier response to Bobby Shmurda and Rowdy Rebel in a series of Instagram Story videos, referring to Rowdy as a “perm-having bitch” and Bobby a “flunk-ass n-gga.”

“Damn, what’s crazy I ain’t even say this perm-having bitch name! N-gga just wanna bring Top up,” he said. “Man, you n-ggas irrelevant and I said what I said, bruh. You n-ggas need a n-gga like me to keep you going. I ain’t doing no falling around this bitch.

“This flunk-ass n-gga want another n-gga to jump out the truck and pump fake, and then get shot in his face? Man, you sound stupid as fuck! You n-ggas dumb. I don’t want no problems with you n-ggas, man. Stay the fuck out my way or get dang, man. Stop the violence like I said, man.”

YoungBoy also called out Bobby for not being a true supporter of King Von, while reiterating he doesn’t want to get dragged into a beef with the GS9 duo.

In other clips, NBA YoungBoy taunted Bobby Shmurda by claiming his “views should go up now” and asking a friend off camera: “When the last time this n-gga ever did a show?” He also mocked the “Hot N-gga” rapper for getting “locked up at the height of [his] career” and not knowing “how to rap no more.”

“The n-gga said, ‘What have I done?’ You know where I am, boy?” he said, referring to his Utah house arrest stemming from gun charges in his home state of Louisiana.

“That’s down bad, them people locked yo ass up at the height of your career. That’s fucked up, son. You a lost soul. That bitch don’t know how to rap no more, son. That n-gga said, ‘What have I done?’ You gotta look up lil’ Top, man. You tripping, fool.”

He added: “Man, go get ’em some views. Help this n-gga get some views. I know the label ready to drop yo bum-ass, man! I’ll pay you to help me stop the violence, n-gga!”

Bobby Shmurda fired back on Instagram Live, claiming he’s “2 and 0 for the year” before threatening to “boom” NBA YoungBoy, Wack 100 and DJ Akademiks.

“But when I catch y’all little n-ggas or DJ Akademiks, everybody, bro. Any n-gga I catch like Wack [100], y’all can record this, I’m going to boom them on camera. On parole? I don’t give a fuck. I’m gonna boom one of y’all n-ggas on camera. On my dead grandmother, n-gga. The fuck is wrong with y’all n-ggas?”

Bobby’s threat was met with hysterical laughter NBA YoungBoy. “Nah, bro! That bitch wanna kill me!” he yelled while replying on his IG Stories. “You ain’t gotta worry about trying to harm me, son. And you ain’t gon’ touch me. I got security, man. I’m paid, son.

“I’ma stay the fuck out yo way, n-gga, and hope you don’t get too close. Man, these n-ggas crazy. A n-gga wanna kill the Slime! You should’ve just minded yo business, man. I ain’t even got that type of intent in my heart. You trippin’, man!”

He added: “That bitch said I’ma bomb on you n-ggas! [laughing hysterically] Aye, I like yo lingo, son. I fuck with that, boy.”

YoungBoy also claimed Bobby Shmurda is “doped up,” while offering to pay him to support his mission to “stop the violence,” referring to a recent PSA he posted online.

“I know how to fight good, bruh. And if I lose, I know to take my ass whooping,” he said. “Say bruh, I don’t want to do none of that and I got nothing against you. What’s wrong with you, son? I see you doped up on camera. I used to be doped up too, I know how that shit feel. Just be my friend, man. You tripping, bruh. Stop the violence and I’ll pay you to help me, bruh. I’m dead serious, son.

“I hope you don’t think I’m scared. These n-ggas crazy, man. Don’t ever let another man get you mad, bruh. I’m gon’ go ahead and deactivate my shit ’cause I think I reached seven days. I’ma let these posts sit here for a lil’ minute and then I’ma deactivate my shit.”

After receiving a call from his parole officer, Bobby Shmurda later retracted his previous statements, claiming in a goofy voice that he was just “playing.”

“Please I don’t want no beef @nba_youngboy [crying face emojis],” he wrote in the caption.

The 28-year-old, who is currently independent after parting ways with Epic Records in March, then turned his attention to the major label system, accusing NBA YoungBoy’s former label, Atlantic Records, of using “bots” to pad the rapper’s stats.

“Atlantic Records, I know y’all got NBA YoungBoy. Epic already on my ass, Roc Nation. Listen, please. Atlantic Records, I don’t want no problems,” he said. “Y’all n-ggas already got my fucking YouTube hacked, down. Got my muthafucking SoundCloud, everywhere. You can’t even type in Bobby Shmurda and my shit pop up. Only ‘Hot N-gga’ because Epic owns it.

Bobby then called NBA YoungBoy the “biggest slave in the game” while elaborating on his bot claims.

“I’m not a slave. NBA’s like one of the biggest slaves in the game. He’s a slave to them, so they’re gonna go crazy for boy. All the shit y’all see on YouTube is fake views. On my dead grandmother, all that shit is fake. For a million views, it’s $4,000 cash, n-gga. This is what these labels do.

“They pay the radio $2,000 every station. They pay people $2,000 a pop to get they shit played on there, so everything y’all listening to is altered. Altered means fake. I’m a real n-gga so they can’t get me with that.”

NBA YoungBoy responded by posting a screenshot of a private DM conversation with Bobby Shmurda along with the caption: “‘Blocked’ before you can even say another word I just want you to win crazy man @itsbobbyshmurda go follow bro #stoptheviolence.”

In the DM exchange, Bobby called YoungBoy a “funny lil n-gga” and asked him to call him. YB replied: “I know and by the way 10k ain’t enough per song I want 1 million just to clear my last song for dsp sites or whatever the fuck that is go get you a big bomb I promise it won’t hurt me this was my last message I don’t want to talk to you you a ‘hot n-gga.'”

Shmurda later reshared NBA YoungBoy’s screenshot on his own Instagram page while accusing him of being the “feds.”

“Nah you da feds how dis get outtt I don’t wanna hear nothing else,” he wrote in the caption. “I’m sorry to all the gangster for entertaining this i did bad I apologize like a man please I don’t want no beef with nobody.”

The back-and-forth eventually fizzled out after NBA YoungBoy deactivated his Instagram page, as promised. Bobby Shmurda’s Instagram posts have also been removed.