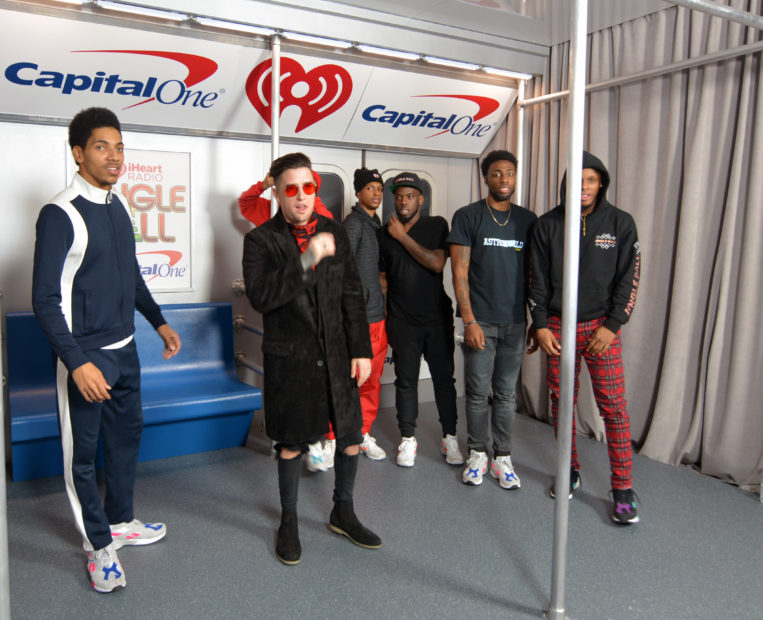 The backstage area at the iHeartRadio Jingle Ball event at Madison Square Garden in New York City was a mess of happy chaos.

The various sundry crew is working to get instruments on and off the stage as publicists, executives, and artist hangers-on are moseying in and out of the gift suite, emerging with electronics, perfumes, and luxury spa bath items tucked neatly under each arm like Santa Claus at Macy’s.

Sabrina Carpenter is bobbing and weaving on the red carpet, alternately stopping for selfies with fans she thinks fall in the “beautiful people” category and dodging those who fall short of the mark. Bebe Rexha takes a more strong-armed approach and just plows through the red carpet, refusing any and all interview requests and exhortations for photos. And Cardi B — fresh off a court appearance — just avoids the brouhaha altogether, only emerging when she needs to appear onstage, and quickly disappearing thereafter.

You know what they say, “If you build it, they will come.” We built a NYC subway, and @WaffleNYC freaked my freak.

In between this hustle and bustle of tidings of not-so-good cheer, the W.A.F.F.L.E. Crew emerges, dancing their lives away and inviting various celebrities to join them in their infectious dance routines. In a corner of Madison Square Garden that was mocked up to look just like a New York City subway car — with strategically placed Capital One advertisements, of course — the Crew’s infectious, expert moves get the attention of the likes of Logan Henderson, Normani, and Real Housewives star Theresa Giudice, all of whom bust a move (or attempt to) to old-school Hip Hop beats in an effort to keep up with the youngsters.

For the leader of the pack ArnStar, this is just him continuing in the tradition set forth by a very influential forefather. “My dad was a part of the Rock Steady Crew,” he said to us, exclusively, at the event. “He was an original member, back in 1982. So we definitely have our good influences. And, for me, I’m just excited to take up the mantle and keep the tradition going.”

The Rock Steady Crew was a collective that combined both breaking (a form of dancing) and Hip Hop music to create a unique sound and style all their own. Originally formed in 1977 in The Bronx, the most popular members were, perhaps, Crazy Legs (Richard Colon) and B-Boy Fresh, who were members of the Manhattan branch of the collective.

But while the elder Crew popularized a style of dancing that’s popularly known as “breakdancing,” the W.A.F.F.L.E. Crew (which, incidentally, stands for We Are Family For Life Entertainment) prefers a style of Hip Hop dancing known as “litefeet.”

And there’s a world of difference between breaking and litefeet, said Sonic, another member of the crew, who acknowledges that the latter is a proper heir to the dancing throne. “We came together as a collective because of our love for Hip Hop,” he said. “And we realized that the chemistry was on a hundred early on. The style was birthed in Harlem, and it’s now worldwide. And by performing together, and doing this type of dancing, we really gained in our self-confidence and kept ourselves off the street.”

These guys dance for tips on NYC subways. Obviously, I gave a big tip. Thanks, @Walmart.

The W.A.F.F.L.E. Crew is certainly not the only game in town, as far as performing on the streets of New York goes. Like other dance crews — including MonzterInc, Brotherhood, 2Real Boyz, Team Rocket, Demon, and Breakfast Club — they perform wherever they can, mostly on the subways, and payment comes in the form of tips from friendly observers.

But they may be the most popular game in town, thanks to a fortuitous appearance on The Ellen Show, where the magnanimous host gifted each member $10,000 for their trouble.

Now, thanks to this high-profile appearance, they’re getting offers to perform from all over the world.

And ArnStar knows that this makes the W.A.F.F.L.E. Crew luckier than most.

“We’re grateful for all that’s been afforded us,” he said. “We could not be more blessed…and humbled.”