The Rock Steady Crew is scheduled to celebrate its 37-year anniversary July 27 in New York City’s Central Park. Kool DJ Red Alert, Jazzy Jay, Tony Touch, JS-1, M.O.P., Large Professor, Cormega, Slick Rick and Das Efx are among the artists slated to appear at the event celebrating the Crew which, which since its inception in 1977 within the Echo Park section of the Bronx, has worked onpreserving and performing the artform of b-boying around the world.

Co-founder Jimmy D said that the crew builds its rep through battling other crews.

A lot of the times we used to go out and look for people, Jimmy D says during an exclusive interview with HipHopDX. “Back then when it was just starting out, there were a lot of crews out there, but they werent full-fledged lets battle moves.

He also says that the crews were held in high regard by Hip Hop acts such as Kool DJ Red Alert and the Cold Crush Brothers. “They would say Were gonna throw a jam on Friday or Saturday, so bring your crew because we used to open for them,” Jimmy D says. “They would start the music and the crowd would start building up. Then they would hear that the crews were gonna be there, and a lot more people would show up. It built a lot of credibility with them because when they figured that not only the deejays would be there, but were gonna have the Rock Steady Crew, the Bronx Boys, and the C.C. Crew [Crazy Commanders] there. It became standing room-only to see what was happening. It built their rep and our rep too because when they did a flyer, at the bottom it would be like ‘Rock Steady Crew is gonna be there.’ And that would get out to the Bronx, Manhattan, Brooklyn, and Queens.”

Jimmy D soon after appointed Crazy Legs as President of Rock Steady for his all city-respected reputation, recruiting talented b-boys including Ken Swift and the late great Frosty Freeze, and his help bringing the uptown b-boy style of dance to the bustling downtown arts and nightclub scene. As their popularity grew across New York City, they were booked on the Roxy Tourwith Afrika Bambaataa, Fab Five Freddy, graffiti artist and deejays in 1982. It was Hip Hops first international tour and featured shows in London and Paris.

The Crew was unable to sustain its momentum throughout the 1980s, though.

“For a moment, it kind of ceased from about 86 to 89, and I was at a point in my life in which I felt like it wasnt over, but it was what it was,” Crazy Legs says during an exclusive interview with HipHopDX. “And then my boy Jerry Fontanez said one day, Yo Legs, Rock Steady for the 90s,’ And I was like Nah. He said You can do it. Then I met Q-Unique [formerly of 1990s New York-based rap crew Arsonists] and he became the next generation of Rock Steady to help build it back up again. Since then weve never stopped.”

Today, the crew maintains its fraternal order and stays involved in the community for social change, bridging gaps between Hip Hop and other cultures, and holding standards of higher education for its school-aged members.

“All the kids in Rock Steady are a great group of kids, and they are all straight A students,” Crazy Legs says. “Being in Rock Steady now, especially as a new generation, you gotta maintain, not just good but great grades. If they mess up in school, youre messing up in Rock Steady. Which is very different from when I got into Rock Steady when there was no focus on education, no focus on making sure that you prepare for the future and do the right thing, being conscious of giving back to the community, and pulling people up as you rise.”

Crazy Legsrole in the crew has also evolved.

“When it comes to situations with the crew, I like to lead from a position of power,” he says. “You can be in the front lines of any organization or group and appear weak. I need to alternate or set the example and say, Hey yo, Im 48 years old, and Im getting it in with my workout. That means everybody in the crew should be working out and taking care of themselves to make sure they appear like the product theyre supposed to be. Especially if they’re trying to be in the entertainment business, to perform at the highest level.”

The flyers for Rock Steady Crew’s 37th Anniversary are as follows, as is a video of the Crew in New York’s Central Park last year. 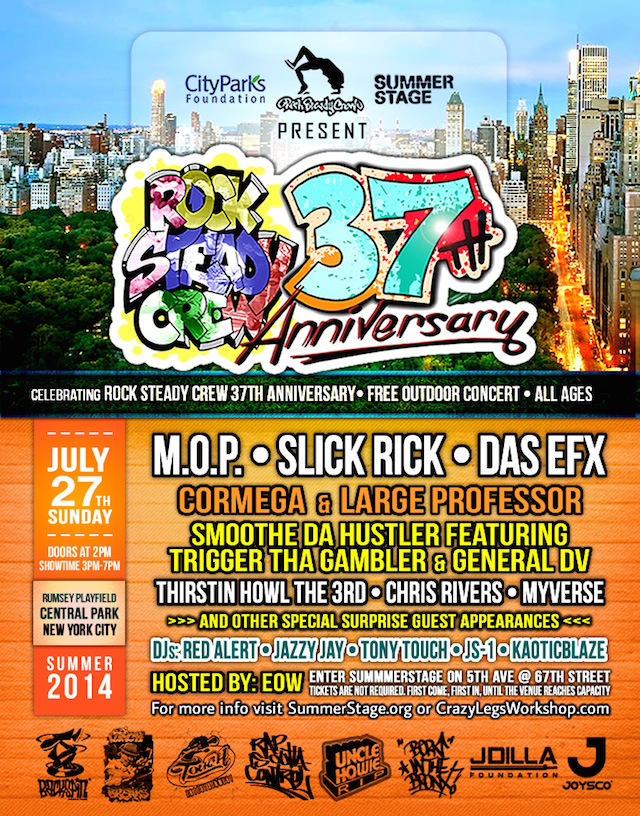 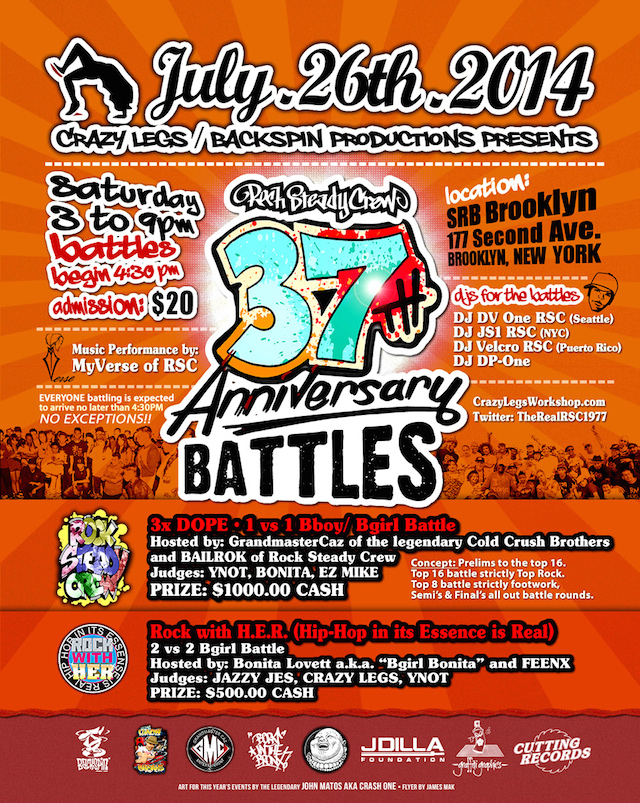