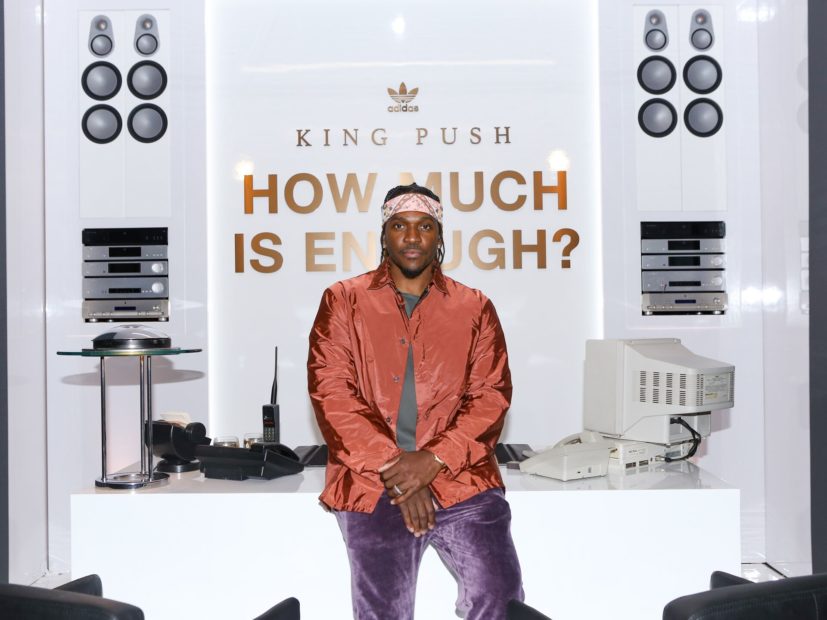 Pusha T Makes His Claim For "Daytona's" Album Of The Year Title — Does He Have A Case?

A sinisterly sly smile completely engulfed Pusha T inside his makeshift office within the adidas Originals Enhanced ComplexCon booth when I brought up the phrase “Album of the Year.” As an extremely active 20-plus-year vet in the game, the G.O.O.D. Music President graduated from a school of the hard knocks where debating Hip Hop was virtually an elective course.

And he was an A student.

“Easily!” he exclaimed when asked if his social media-disrupting album, Daytona was a contender for 2018’s top LP. Released in May 2018, the project earned some notable distinctions (the echoing Drake beef, Kanye’s return to raw production, Whitney Houston’s family outcry) to allow its memory to be on the forefront of Hip Hop heads’ minds.

But Pusha also doesn’t think he has a complete landslide.

“When it comes to albums that I like, I would say like Nipsey Hussle [Victory Lap]. Like I liked his album, a lot. On the other spectrum that may fall in that ‘rap’ category is [Travis Scott’s] Astroworld. It depends on what we’re talking about. But if we’re talking about rap rap album of the year, I got that! Easy! But if there are other factors and so forth that come into play, it may be more of a competition. But as far as rap goes, I feel like I clearly killed it.”

The other “factors” Push was referring to definitely indicated sales and/or astronomical streaming numbers, which speak to the genre’s imminent culture shift. However, this particular lyricist is still very confident about his trademarked sound.

“Hip Hop is rhythmic and repetitive, but at the same time, I’d like to say lyric-driven Hip Hop never goes out of style,” he explained. “When you have a message and when you’re piecing those puzzles together with those words, there’s always an audience for that level of cleverness and intricacies.”

And of course, there was pigeonholing that he always deemed as a career hindrance.

“I felt like when I came out, there was a whole new genre called ‘coke rap,'” King Push elaborated. “I felt like there was always ‘Street Hip Hop’ or whatever but I feel like when the Clipse came, they coined this term that sort of stuck. But it was a term that I didn’t really appreciate it because that’s not what it was. We were just talking about what’s going on outside.”

Shout out to everyone that stopped by the @adidasOriginals EQT booth and most importantly, thank you to all the artists. Unfortunately, I can only send 5 artists onto the next round of the #adidassoundlabs grant contest. The Top 5: @OfficialSareal @LorineChia @IceColdBishop @IndiigoLab @RugbyWild

Time is money! @adidasOriginals & myself are dropping 40 pairs of the new #KingPushEQT exclusively at @complexcon Get your phones ready first drop is 1pm on Saturday. #createdwithadidas

Pusha’s conviction describing his craft was accented by the adidas pop-up we conducted the interview in; sculpted in the likeness of a retro penthouse office, complete with the brick cellular phone, Tandy computer and Laserdisc surround system. His presence at 2018 ComplexCon appeased swag lords and scholars alike for he was on hand to not only unveil his limited edition adidas EQT Cushion 2 collaboration but to uplift aspiring musicians looking to secure an adidas Originals Sound Labs Grant in Los Angeles.

“Collabing with adidas was always a special thing because they fully let me be myself and add my own nuances that made it Pusha T,” he says of the honor, even throwing in a “Prius” and “need us” ad-lib to prove he has rhymes ready for his favorite sneaker company. “And in all honesty, I never wanted to be a part of a brand that just wanted to slap my name on something. [Adidas] always spoke to and catered the product towards my brand. And I’ve always appreciated that.”

The Shepherd & The Goat ?? @pharrell

With 2018 coming to a close and Daytona‘s seven-song tally well-worn into oblivion according to today’s fly-by-night standards, naturally a conversation on when the next album is arriving sprung up. Push fans can take solace in knowing that he’s been mapping out his next rollout.

“We working on the follow-up now. I’m actually finishing up my tour until December 16 but at the top of the year, we’ll be ready to go [with the new album],” he assured.

If you know, you know. Check down below for said tour dates. For more information on adidas Originals collaborations, visit here.