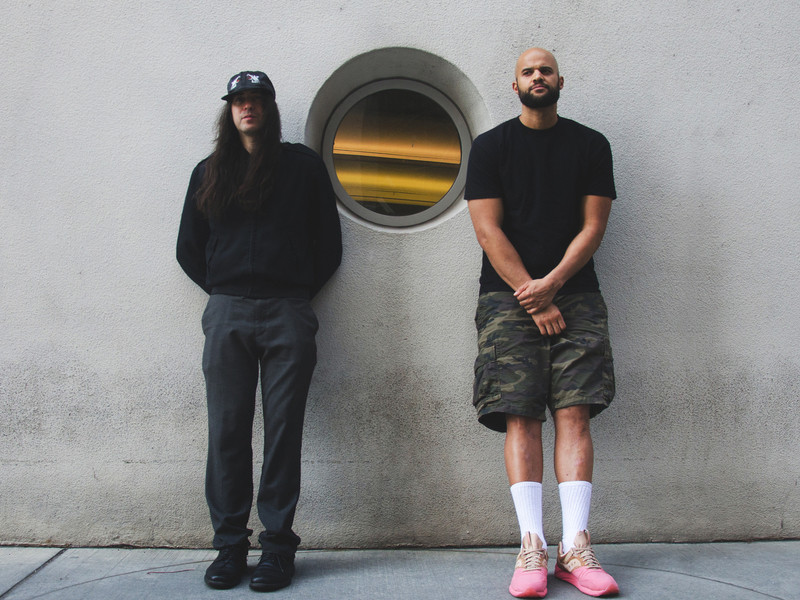 Homeboy Sandman’s latest collaboration has brought one of Hip Hop’s best-kept secrets back into the spotlight. Nearly a decade after the release of his last project, Edan has returned alongside Sandman for a collaborative EP titled Humble Pi.

With the project out now on Stones Throw Records, HipHopDX caught up with the duo to learn about how their collaboration came to be. The two also speak on their creative chemistry, the difficulty involved in shooting “The Gut” music video and more.

HipHopDX: How did your collaborative relationship go from working on “Talking (Bleep)” a few years ago to creating an entire project together? How long would you say this project took to make?

Edan: We may have had the “Internet” joint and one other sketch before “Talking (Bleep).” Either way, I felt the creative chemistry right off. Something like “Bleep” felt like a mere warm-up. Knew we had to keep it up. Sand kept coming through the lab when he had a free day here and there, and the project took shape very naturally. For the first year or so, there probably wasn’t too much emphasis on deadlines or final products. Once we had three or four joints, we likely started to visualize a finish line.

All that said, I’d say two to three years from the first session to the completion of the record.

DX: Your styles mesh so well together. Is there anything you’re able to pull off artistically in this collaboration that you haven’t been able to achieve before?

Sandman: Thank you. Lots. As a team, there’s a vibe and an aesthetic and an energy that I can’t channel on my own. It’s unique. It takes the combo.

Edan: What he said … first time I’ve produced a record where someone else does the majority of the rhyming. Feels good to be part of a squad, even if it’s just a duo. At this point in life, I’m more interested in the team thing than a solitary, one-person creative experience. Feels more enriching to share the process with other like-minded musicians, etc. Feeling fortunate to work with a gifted artist such as Sand.

DX: Were there any records or concepts that were particularly challenging for you on Humble Pi?

Sandman: “Grim Seasons” took a while to write. Maybe a whole week. Then it took Edan even longer to build the different seasonal beats. “Rock & Roll Indian Dance” was a new type of challenge, writing line-for-line like that. Sometimes word-for-word.

DX: “The Gut” video is incredibly creative. How difficult was it to shoot? Where did the idea come from?

Sandman: We were in the pool for 10 hours. My baby girl Lisa is behind the walls holding them together. Photo Rob had the room in a pool idea and the rain suits/flippers idea. Edan had the motion graphics idea. It was a team effort.

Edan: The chlorine in the pool did a number on cats’ eyesight. That shit dilates the pupils. That evening after the shoot, both Sand and I were commenting on how weird everything looked to us, especially streetlights and such. Luckily, optic health reverted to normal by the following day [laughs].

DX: On the singles, “The Gut” is the only one with Edan rapping. Did you both approach the project as the dynamic of MC and producer as opposed to two MCs teaming up?

Sandman: Edan makes so many hot beats. I wanted to write to all them shits. As a gifted MC and producer, he’s got his own feelings about when to do what. For me, it’s a win-win. Either way, I get to rap over crazy beats. Sometimes I get to have one of my favorite rappers on them songs too.

Edan: Much appreciated, Sand. Things naturally fell into that dynamic with us. Sand is such a gifted MC and writer … and a fast and prolific one, at that. The songs just got done quicker that way. If we had to wait for me to pen some shit for every jam, we’d still be waiting. Every so often, I catch a flurry of inspiration to write, etc. I just so happen to enjoy the non-verbal, textural expression that comes with production just as much, if not more so.

DX: Sandman, does working with one producer change your creative process as opposed having multiple producers involved like 2017’s Veins?

DX: Do you see Humble Pi being the beginning of a string of collabs with Edan like your series with Aesop Rock?

DX: In today’s Hip Hop landscape, there’s a constant demand for music. Edan, do you worry at all about being “out of sight, out of mind” with your last project dropping in 2009?

Edan: I think if I was truly worried about it, I woulda put more shit out [laughs]. Did some cameos and features here and there since ’09, and I dig I those came out. Nothing was forced. It was always done for the right reason, not so much for the sake of career. Was able to travel around the globe and perform when I wasn’t releasing a bunch of music. Fortunately, I’ve been able to keep the lights on all these years doing music in one form or another.

DX: As someone whose production has been seen as being ahead of its time, how do you continue to innovate? With many producers moving away from sampling, do you feel a sense of pride in maintaining this core element of Hip Hop production?

Edan: Sometimes, you might stumble onto an innovation — or a combo of elements that hasn’t been done before, although things aren’t often truly new under the sun. Other times, it’s simply a matter of ignoring the shit out of the status quo or the current trend.

I tend to have more respect for artists that have a vision and stick to it than those who feel like they need to try their hand at every style or sound that becomes hot for a minute.

As far as sampling goes, I’ll always directly associate that with Hip Hop’s essence. To me, that element of sonic photography or collage that comes with cutting up two copies of a record and repeating a break or a phrase or doing the same on a beat machine — the way that photography affects the human psyche — is intrinsic to the whole thing. [It’s] the defining trait, if you will.