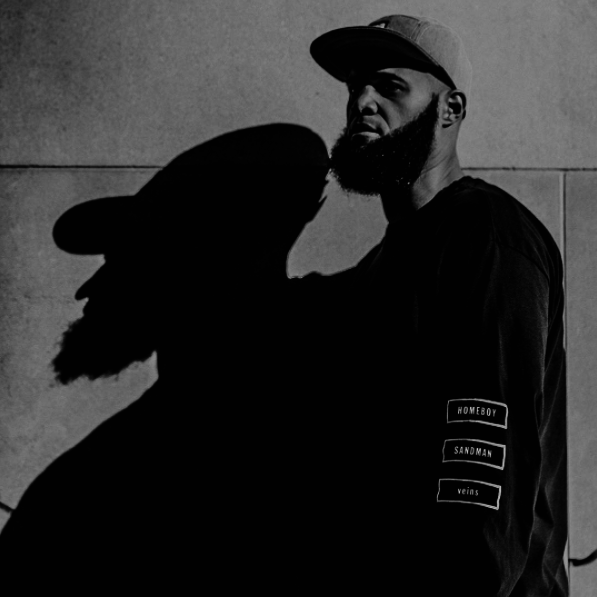 When Stones Throw Records signed Homeboy Sandman in 2011, the tenacious Queens MC was seemingly another colorful addition to its already eclectic roster, which is now home to artists like NxWorries (Anderson .Paak and producer Knxwledge), Guilty Simpson, MF Doom, Madlib and Tuxedo (Jake One and Mayer Hawthorne). After dropping the Subject: Matter EP in 2012, he’s consistently pumped out projects (including an entry in HipHopDX’s 2016 Most Slept-On Albums with Kindness For Weakness), culminating with Veins, his seventh official studio album and fourth for Stones Throw.

Beginning with “Between The Clouds,” the 10-track project rarely sways from the melancholic, jazz-tinged production that permeates the album and each song hovers around three minutes, making them all noticeably very short. While the first two fail to make much of a splash, the third track, “Bamboo,” comes in with a bang and completely switches up the tone with its upbeat melody. It also gives Homeboy a chance to showcase his rhyming prowess with his fast-paced execution. But before too long, it begins to teeter with becoming background music, and seems to support the theory he fairs much better on collaborative endeavors like Lice and Lice Two with Aesop Rock. Sad to say, this particular Homeboy Sandman album is akin to watching granules of sand fall through an hourglass. The most interesting concept and undeniable album highlight comes in the form of “Underground Dreams,” which touches on the perceived negatives and positives of fame.

“One day I’m going to put it all together/gonna to be a rap star/I’m gonna make a record everybody thinks is classic/not just a couple people/hot women are going to through themselves at me/anything I post is going to get mad likes and shares/but I’m never going to post at that point/I don’t really like posting/it just helps get me famous-er,” he spits, seeming to genuinely want that kind of life. As the song trudges along, it becomes clear that the ugly side of being a “star” is perhaps something he’s not ready to embrace.

“In a couple years/I won’t be able to go out in public/I’ll wile on every interviewer that asks me some dumb shit,” he says, immediately conjuring up images of Lil Wayne going off on the Nightline reporter who infuriated him by asking about the Black Lives Matter movement (“My life matter,” Weezy said).

The 35-year-old rapper ends the album on a solid note with the track “Bless Up,” a vintage boom-bap offering that brings his penchant for Golden Era Hip Hop to the forefront and clear intent to stay true to who he is.

For the most part, Sandman’s delivery is steady and reliable, but he runs the risk of becoming dull far too often. It can sometimes come across as moderately lazy and as if he’s periodically missing the passion for his craft. To his credit, he’s at least giving listeners something to think about and digest. In this often vapid world of meaningless lyrics, having to actually dissect what an MC is saying is, on one hand, like a breath of fresh air. However, despite the fact he claims he “stands out like a sore thumb on HipHopDX” on the track “A’s, J’s & L’s,” he’s going to have to spit a little harder next time to truly make his music jump off the page.