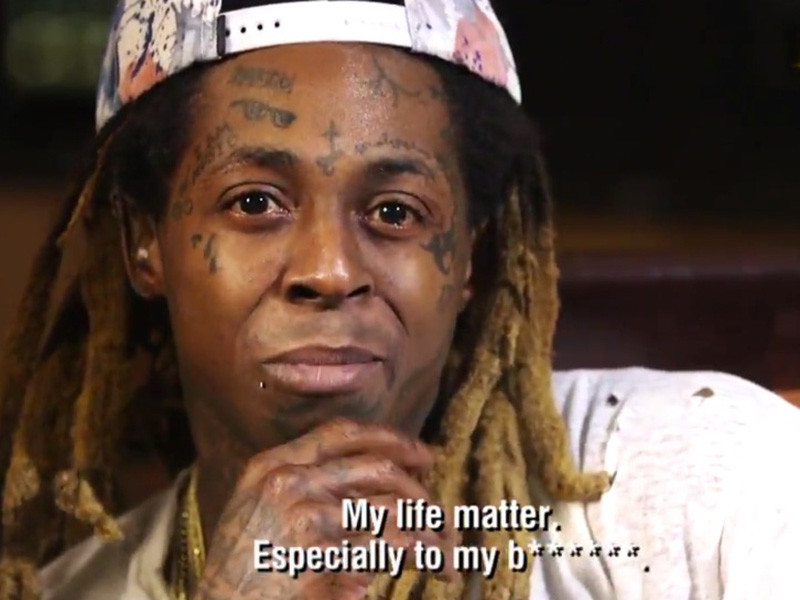 Lil Wayne will certainly have raised a few eyebrows — or all the eyebrows — with his most recent comments on the Black Lives Matter movement.

In an interview with ABC’s Nightline, the 34-year-old rapper from New Orleans said he feels no connection to the movement that arose after multiple police shootings killed unarmed black Americans.

Weezy was asked by reporter Linsey Davis for his thoughts on the Black Lives Matters movement, to which he responded “What is it? What do you mean?”

Doubling down on his dismissal, Lil Wayne pressed ahead by saying “I am a young black rich [muthafucka]. If that don’t let you know that America understand black [bleeped out] matter these days, I don’t know what it is. That man white [points at cameraman]; he filmin’ me. I’m a [nigga]. I don’t know what you mean man. Don’t come at me with that dumb [shit], ma’am. My life matter. Especially to my [bitches]. ”

This latest interview seems to be at odds with the rapper’s previous interaction with Black Lives Matter, given that he himself chanted the phrase at a concert in August.

With that being said, Wayne has also gotten into trouble before for sharing his thoughts on racism. When speaking to Fox Sports’ Undisputed back in September, he controversially said there was “no such thing as racism” because he’d never experienced it personally. He re-enforced this by giving the example that he had played to crowds that were mostly white.

“I’m blessed to have that opportunity, so with that said, I can only be honest with such a thing, I have never witnessed racism.”

Watch more of the Nightline interview below.