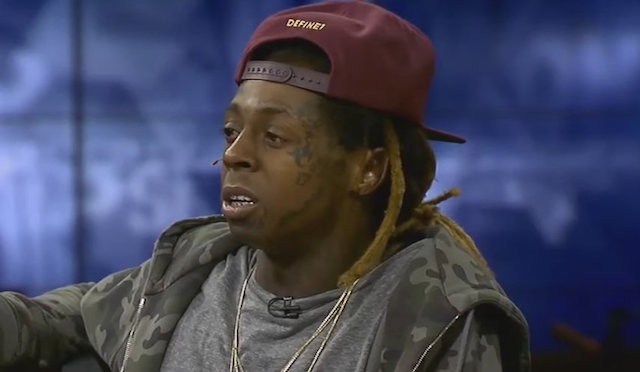 Lil Wayne must have been caught in the euphoric fanfare of millions of people (including Kendrick Lamar) disapproving of the notion of him hanging up his mic for good that he didn’t carefully choose his words when asked about his massive white fanbase.

While appearing on his longtime pal Skip Bayless’ new show on FOX, Undisputed earlier today (September 13), Weezy openly admitted that racism doesn’t apply to him because he never experienced it.

“I don’t want to be bashed, because I don’t want to seem like I’m on the wrong side,” Wayne said, harboring on the topic of Colin Kaepernick’s heavily publicized “Star-Spangled Banner” protests. “But I thought that was clearly a message that there was no such thing as racism.”

“I don’t want to be bashed, because I don’t want to seem like I’m on the wrong side,” Wayne responded. “But I thought that was clearly a message that there was no such thing as racism.”

Although it was the complete opposite of his intent, a bashing was held at Lil Tunechi’s expense as his response was the furthest thing from being empathic to a systematic oppression that plagues plenty of individuals in a lesser tax bracket.

Lil Wayne: Racism is over Me: pic.twitter.com/RfJXTNWgUA

Lil' Wayne, a New Orleans native, said there is no such thing of racism. Get off that lean. pic.twitter.com/SlopS0Hku7

I think lil Wayne doesn't see enough income earning potential in activism. A job at a non profit won't cut it for him.

In the spirit of what my brother Dominic has begun, I wanna award today's coon o' tha day award to this funny… https://t.co/5UHVDGUCFe

Lil Wayne thought there was no such thing as racism when he saw that his concerts attracted majority whites ???????? pic.twitter.com/X7wrUL6BjH

So is everyone ignoring the fact Lil Wayne said racism doesn't exist because white ppl come to his shows?

Fuck Lil Wayne. @LilTunechi is officially on the coon list.

@Bossip the lean he drinks helps him forget

It's wild to hear people like lil Wayne & Cam Newton saying racism doesn't exist when they've been discriminated against from the jump.

lil Wayne been a coon ever since I heard him say darkskin women were ugly.

I normally take people at their word, but there's no way I believe Lil Wayne has never experienced any racism in his entire life