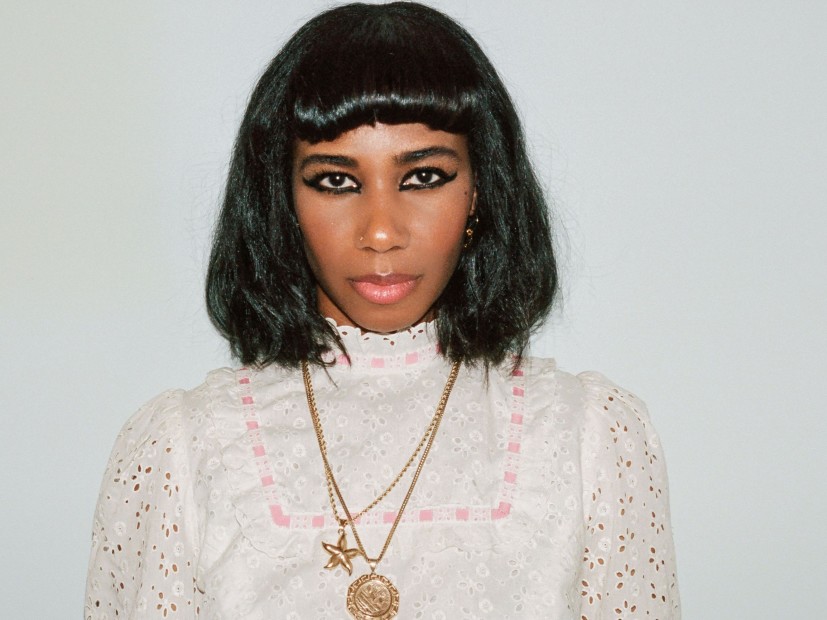 Santigold just finished her morning breast pumping routine — and unapologetically so. As a mother to 5-month-old twins and her 4-year-old son Radek, she’s tasked with juggling baby duties with interviews, touring and recording, which isn’t exactly an easy feat. But somehow, Santi makes it seem effortless.

Earlier this month, the Philly native surprised her fans when she released I Don’t Want: The Gold Fire Sessions, her fourth studio album. It was recorded in two weeks with producer Dre Skull in New York, although she relocated to Los Angeles before finishing it.

“It was kind of a crazy year,” Santi tells HipHopDX. “I moved to Los Angeles last summer. Then, maybe a week or two after I got here, I found out I was pregnant and then I found out it was twins. So, that was interesting [laughs].

“That year, we moved like five times. We moved into a temporary rental and then we bought a new house and went from there. But then we had water damage, so we had to move out again and, at this point, I was about six weeks from delivery. I was so pregnant. So, we moved into a rental apartment.”

With one song left to go, Santi was struggling to tie up the album. But like a boss, she pulled it off — nine months pregnant.

“I was huge,” she explains. “My stomach was like a shelf and I could barely move. In fact, I was on modified bedrest for 10 weeks. I was like, ‘I don’t think I can get this record done ’cause I feel like shit.’ I had done most of it the summer right before I moved.

“So, we flew the engineer from New York to L.A. two weekends and we did a little bit. I was trying so hard and was like, ‘I just gotta write the last song’ and I couldn’t. It wasn’t coming. I was stressed. I was so mad at myself. The engineer had to leave and I was like, ‘Who’s gonna record me?’ But I did it. I recorded it myself and edited it myself in a bedroom with mattresses and mattress box covers up all around the windows to stop the sound from bouncing off the walls.”

Finally, Santi finished it. The result? 10 Afro-Caribbean, dancehall and reggae-infused tracks intended to be like an antidote to the dark, political climate America is experiencing at the moment. While she says she didn’t go into the writing sessions with that concept in mind, it evolved into the project’s central theme.

“It was about the times,” she says. “Things had been so heavy for so long and it’s like paralyzing a little bit. As an artist, I don’t know what to do, you know? And so the thing about music for me is the music has that thing. I let go and it just comes. That’s what music is for me.”

The album’s title track, “I Don’t Want,” truly defines who Santigold is. Her independent spirit shines through, much like it does on 2008’s seminal album, Santogold, 2012’s Master of My Make-Believe and 2016’s 99¢ — basically everything she’s ever done.

“The song is about defining your own rules and your own definitions of success,” she says. “Honestly, I moved to L.A. to redefine that for myself. That’s what it was about. I don’t wanna be crying all the time, and I don’t wanna have life going so fast that I am not really living it the way that I want to be. I wanna make my own rules, and I don’t want any body else to tell me what success looks like, what I should look like, what winning is or what my goals should be.

“I think that type of individual assessment and checking in with yourself and keeping yourself in line with who you wanna be and what you wanna be doing is what we all need to be doing for the world. I think we are always looking for somebody else to fix things, but nobody else can fix you. We have to fix ourselves.”

Part of Santi’s appeal is the confidence she has in herself, but she knows she can be a hater. She jokes she wished she would have written Chief Keef’s “Shit I Don’t Like” because she’s one of those people who either loves something or totally hates it. There’s no in between.

“My friend Seth said it’s because I’m like the biggest hater ever,” she says with a laugh. “And you know when, what’s his name? Chief Keef? When he came out with that song ‘Shit I don’t like,’ I was mad I didn’t write it.”

For now, Santi is back home and gearing up for another run of performances as part of The Miseducation Of Lauryn Hill 20th Anniversary Tour. Although Hill canceled all scheduled shows for the month of August, Santi recognizes life as an artist is simply challenging at times.

“I’ve already done two shows, so at least I know what to expect,” she says. “I think she’s just a true artist.”

The Miseducation Of Lauryn Hill 20th Anniversary Tour picks back up on September 12 in Portland, Oregon.[apple_news_ad type=”any”]