Santigold - Master Of My Make Believe 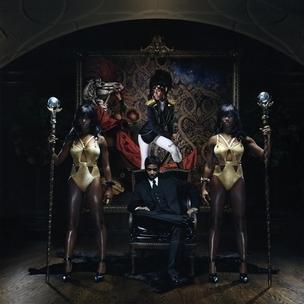 Santigold’s first album was met with mixed reception, largely due to a hodge-podge of styles leading to a somewhat uneven experience. After a forced name change and a four-year break, she returns with Master of My Make-Believe, a more confident album that sounds more like what fans might have expected. Santigold’s wide range of tastes is still a key element, but this time around, she’s able to blend them all together in a way that’s far more coherent.

Overall, Santigold chooses to focus on the Afro-Caribbean end of her influences a little more, making even mainstream-friendly tracks like “Disparate Youth” just “different” enough to warrant attention. Relatively Pop tracks like “This Isn’t Our Parade” and “God From the Machine” still share some common threads with electronically-inclined dance tracks like “Freak Like Me,” so as she sways back and forth between modes, the effect is less jarring.

Master of My Make-Believe features an all-star lineup of producers and writers, including Diplo, Switch, Q-Tip, members of TV On The Radio and The Yeah Yeah Yeahs. This does in fact result in a number of great tracks, but unfortunately, Santigold herself sometimes gets lost in the shuffle. She manages to hold her own at times (“The Riot’s Gone”), but in other cases either fades into the background of her own song (“Fame”) or fails to do anything that feels distinct from various other similar artists (“Look at these Hoes”).

Admittedly, Santigold feels less unique now than when we were first introduced to her, but in a way, that’s to her benefit. Instead of being a presumed tent-pole in a new movement, she now gets to record as her own person. While she hasn’t changed drastically, she has found a better way to define herself and music. There’s still a bit more growing to do, but Master of My Make-Believe shows that’s she’s headed in the right direction.