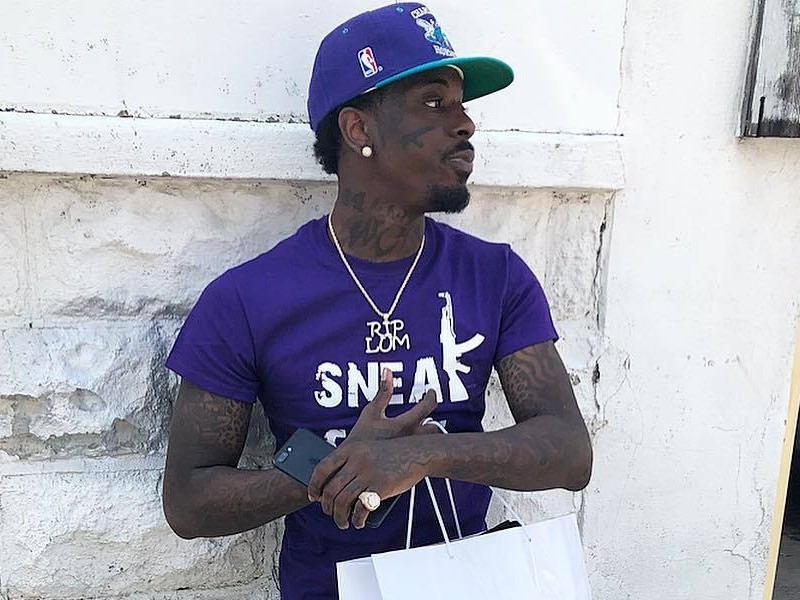 More Than A Hashtag: What Jimmy Wopo Meant To Pittsburgh’s Hill District

Wopo, born Travon Smart, was a native of Pittsburgh’s Hill District, and had just inked a deal with Wiz Khalifa’s Taylor Gang Entertainment before he was killed at 21 on Monday (June 18) in his own neighborhood.

Roberts, 24, knew Wopo since he was four years old, and said he watched the rapper grow from a “hothead” to an “inspiration.”

“He had that voice,” Roberts said. “He was our Biggie Smalls out here. How [Biggie] was in Brooklyn, Wopo was that up here. The kids loved him to death.”

One of those kids, 14-year-old Traisean Bates, looked up to and took advice from Wopo. The burgeoning rapper told Traisean to stay in school, and advised him to earn money by mowing lawns.

Traisean also loved Wopo’s music, including the songs “Devil Face” and “Elm Street.” He enjoyed the reality in Wopo’s raps.

That reality is something Wopo had emphasized in his work from a young age. Roberts said that, when he was 11 or 12 years old, he starting recording songs. A younger Wopo heard them, and told him to stop rhyming about Ferraris and Lamborghinis and rap about what’s around him.

“I’m saying, get realistic with it,” Wopo told him. “Make it stuff we see everyday.”

Roberts said that for a while, Wopo put music on the back burner for a life of crime. However, after having a child, and seeing his friends die from the same life he was living, he decided to focus on music.

Roberts points to the song “Different Level,” from 2016 as a turning point for his friend. Wopo tells listeners he “ain’t playing on these tracks no more.”

From there, Wopo gained traction with his music, and began to act as a role model for the Hill District’s youths.

“I saw him outside talking to kids, and the first thing he told them was, ‘All right, y’all be careful, stay in school,’” Roberts said. “He didn’t finish school, so it’s like he’s telling them to stay in school. I was across the street and I saw so many kids run past me and tell me, ‘Jimmy Wopo just told me to stay in school, so now I got to do better in school.’”

Nicky Lee, who lives on Somers Drive in the Hill District, also saw a change in Wopo.

“It just seemed like he was trying to do better,” she said. “He might have got caught up [in crime] before.”

Lee recalls that he was always respectful in conversations with her.

“I’ve never seen nothing bad in the dude,” she said. “He was always smiling.”

Another Hill District resident, a man named Freddie who chose not to reveal his last name, recalled a time when Wopo bought about 40 kids treats from an ice cream truck.

As he began to blow up, Wopo continued to support his community. He regularly showed up when Roberts, a former college basketball player, trained neighborhood athletes. He was even planning to finance a fundraiser for Roberts’ training camp, Camp Nitty.

However, Wopo also stayed focused on his music dream, and was reportedly planning to move to Los Angeles after signing with Taylor Gang.

That all ended Monday, when he was shot shortly after 4 p.m. while in his vehicle in the 2400 block of Wylie Avenue.

The neighborhood is in mourning. Roberts is keeping busy training athletes, while Wopo’s death weighs heavily on Traisean’s mind.

“(I’ve) been thinking about it a lot,” he said, while adding that Wopo’s death has taught him to “don’t do bad things and just stay in school.”

Lisa Woodbury, who now lives in Jimmy Wopo’s childhood home, speaks about the impact he had in the community. #JimmyWopo pic.twitter.com/Gab1n328OB

Dee Dee, another Hill District resident who chose not to reveal her name, said she spent much of Tuesday comforting her daughter, Sanaa, after Wopo’s death.

“She was messed up, she was crying,” Dee Dee said. “I had to console my baby.”

Roberts speculated that Wopo was a killed as a “trophy.”

“Somebody saw him, maybe had a beef with him back in the day or recently, and the motive was, ‘Here’s our chance to finally get him,’” Roberts speculated. “I heard people glamorizing it on the internet that they were the ones that did it. So that’s a trophy in their eyes.”

He also acknowledged that the shooting could have been linked to Wopo’s past life.

However, Roberts also said the reports about Wopo possibly being involved in two homicides have no merit.

“If he was connected to all of these crimes, why wouldn’t you say it before?” Roberts said. “I know some people were supposedly scared, but there’s witness protection.”

Roberts hopes that the neighborhood kids will take some positives from the tragedy.

“His passing showed most of these kids that there’s really nothing in these streets,” he said.

As for his friend, Roberts cherishes his memories of Travon Smart.

“Every moment with him [was] not dull at all,” he said. “Every moment, you’re just with him, your face [was] always stuck in a smile, because he’s either ripping on you, joking, or telling a story.”