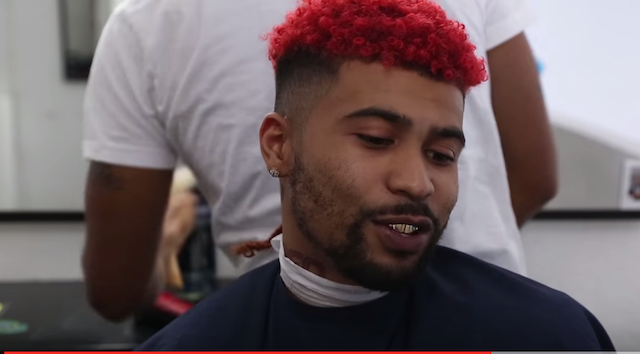 Kid Red obviously stands out thanks to his trademarked crimson hair but just like anything and anyone, there are more facets to his character.

The Bay Area rapper, specifically Fillmore, CA, recently dropped his Guilty By Association project which features the likes of Chris Brown, Migos, French Montana, Skeme, and Rockie Fresh but the long-delayed release was preceded by the Granada Hills mansion pool party he hosted on Saturday, August 20 where his good friend Kid Cali was murdered after shots rang out at the function.

Proceeding with caution, Kid Red welcomed HipHopDX as he was ready to break his silence on the incident while he got his hair cut at his go-to barbershop Sorry We’re Open in Hollywood, CA. (Church, his barber of 10+ years says it requires upkeep at least once a week.) While speaking on the still unsolved murder, he was explicit to clarify that, while he was the host, he was simply enjoying the scenery like everybody else before the shots rang out.

“I just hate shit like that had to happen around me. Kid Cali was a good dude. He always had great energy,” Red explained.

“We just made this dope ass song with me, him and my homie Thirsty P that we was planning on shooting a video for so it was just horrible that some shit like that would happen.”

Nevertheless, Red’s solo career has caught a spark and when speaking on his new mixtape, Guilty by Association, he excitedly states “Man, that project took a long time to come out man. I’m glad I waited. I was able to get certain features I wanted.”

We also discovered his hit single “Bounce” was the mere result of him, Chris Brown, and Quavo of Migos fucking around in the studio.

Chris Brown was like “You should just make that your single.” And that was that.

NSFW: You may want to avoid watching this raunchy visual in public altogether.

Red also credits Game for influencing his rapping career (“Hell no!” he exclaimed when asked if he thought he was destined to be a rapper). Speaking of which, Red also gave his two cents on the latest Game/Meek Mill beef, stating, “as a fan of Hip Hop, I like it. To hear his diss records, I’m sitting on my phone gritting my teeth listening to them.”

And then there’s Famous Dex, who could very easily add an “in” prefix to his name ever since the video of him beating up his girlfriend went viral. Red, who had previously offered his support on Instagram, doubled down on the notion that the 300 recording artist needed to go into apology mode to earn the people’s respect.

Still, with both Game and Meek Mill as well as French Montana also backing him up, the future is bright for Kid Red. Listen to the Guilty by Association mixtape in full down below.