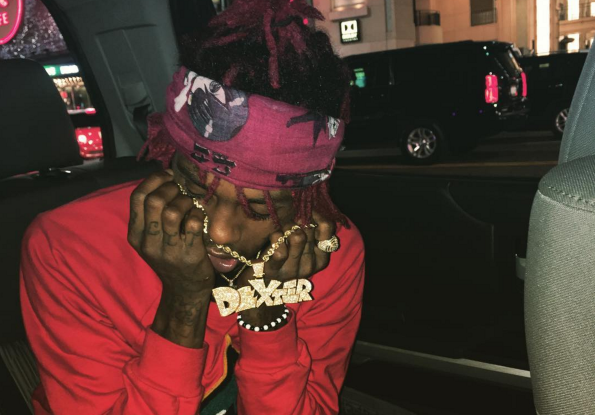 Chicago rapper and 300 Entertainment recording artist Famous Dex just released a new project but that accomplishment in his budding career has just become an afterthought in lieu of new surveillance footage that showcases him attacking his now ex-girlfriend with closed fists in the hallway of a Hollywood apartment.

The footage was made viral by singer/songwriter Tish Hyman, who says it was her apartment Dex was staying in when the unhinged act of domestic violence took place as she proceeded to give the incident some color on a video that has already been video more than 100,000 times.

“Let this man #famousdex @famousdex stay at my place,” she began before revealing even more bad news.

“He not only TRASHED And BROKE INTO my place. He beat this poor girl so badly. Is this the new generation of great artists that young people are looking up to? And is THIS the type of person a great company like @puma #puma chose to represent their brand. So disappointing. I hope this spreads through the Internet and shows these young people what Young Dexter is about. Thank you for hurting me young man. But you truly hurt yourself.”

Hyman also posted screenshots of alleged text messages between her and Dex where he denied the robbery took place with sad face and heartbreak emojis.

“This nigga was texting me the whole time while breaking into my shit. What a piece of shit please everyone REPOST my last post. Let the world know what a Thieving. Lying. Woman beating person @famousdex is. If you follow me and my music. You KNOW there is nothing I would have done to deserve this. I HELP out my own. And THIS is what I got. Can’t lie I feel violated right now but I hope this will stop him from doing this to someone else,” she captioned in the iMessage exchange.

The inclusion of Puma’s name in Hyman’s revelation was a direct reference to Dex’s new modeling gig for the sports apparel brand’s new collection with Pink Dolphin.

In a series of deleted tweets, Dex addressed the contents of the video while blaming his violent actions on his girlfriend’s decision to “cheat.”

The adjacent tweet offered up some more color commentary as he wrote, “God Know Im Sorry For Flight She wasn’t Hurt my I Cut My Hand Like Wtf Im Not Like That She Cheated on me an She Was Wrong God Know,” before adding more of those self-decrepitating emojis.

Houston rapper and Dex’s running mate, Ugly God, put his reputation on the line by defending his friend’s actions. Ditto for Rich The Kid.

Meanwhile, Hyman flipped social media mediums to combat Dex fans who felt it was her job to keep quiet.

She also provided receipts for everything she said he did.

For you folks who wanna see what he did. pic.twitter.com/6ZWNmoMYt3

Oh I'm fine. I follow the law. I have lawyers. I have money. I will follow the necessary steps to get justice https://t.co/prYCHuGkNw

He hit her so hard he hurt himself. Poor guy. He was so hurt he broke into my crib after that. https://t.co/vlf8FEjOZM

Snitch? This is exactly what's wrong with you niggers. Reporting an injustice is not snitching. It's justice https://t.co/GaWIGyYnfV

Snitch. When you get robbed who you call ? https://t.co/THDaOVSKpH

I'm from the Bronx. I gave him love respect and trust. He broke that shit. He evil as hell for what he did https://t.co/3KiQWb8tDb

Dex’s name has just been intertwined with the tattered list of Hip Hop notables who have been accused or convicted of domestic violence.