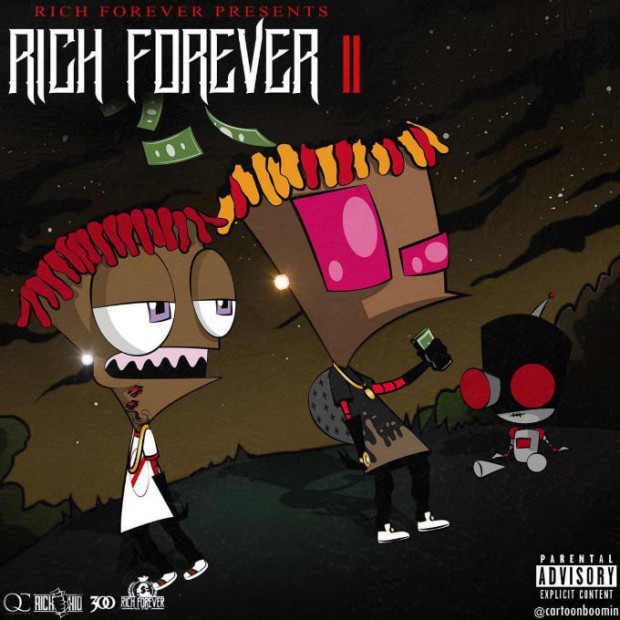 Queens born, Atlanta raised MC Rich The Kid represents a new generation of rap in 2016. Signed to a collection of labels including Quality Control, the Lyor Cohen led 300 Entertainment, and his own Rich Forever imprint, Rich’s sound comes from the mold of his QC label-mates Migos. Rich Forever II, with his Rich Forever signee and Chicago MC Famous Dex, is Rich’s 15th mixtape since stepping on the scene in 2013—his 3rd in the past 4 months alone.

Rich Forever II opens with “Plug Callin,” an ode to Rich and Dex’s non-English connect over deep bass and a simple piano riff. Mixing trap rap with finesse, the two offer nothing of lyrical value other than flossing on record with bars like, “I’m rich forever, rock star chain heavy metal/rings on me, been the champ racks on me nigga limp.” The two follow the trend on the next track with the Wiz Khalfia-assisted “2 Times.” Not to ever be outdone on mediocrity, Wiz Khalifa claps back with humdrum delivery and uninspired bars, “Got a new bitch that I met only let me hit two times, kick a bitch right off the futon/I’m getting that bread like a crouton.”

The Migos influence is rampant throughout Rich Forever II in song structure, rhyme patterns and vocal afflictions in tracks like the Lil Yachty-featured “That Way,” “Rich Forever,” “Out The Mud,” and “Goyard.” Sonically, the tape is akin to the kid who wants to be like his big brother so he mimics his every move as best he can.

Rich Forever II plays out like an Adderall and Codeine-induced bender. Aside from “Run It Up” with Young Thug, the entire tape is one giant song of limited subject material. If faux trap rap and finesse-no-substance bars are your thing then Rich Forever II is worth a listen. With 3 mixtapes in 4 months, it may be time for Rich The Kid to slow his output and focus on QC his label stands for.