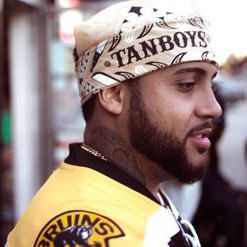 Hip Hop arguments relating to New York traditionalism vs. the effects of creative Darwinism are something that obviously has to be something that weighs heavily on artists from there. Does one risk sticking to simple boom-bap and lyrically driven bars or does one cater to a mainstream sound more fitting to contemporary taste? Finding that delicate balance is easier said than done. Regardless, some individuals are attempting to build dedicated fan bases by paving a lane for their own including Action Bronson and Joey Bad A$$. One emcee who has been slowly building status for himself is Spanish Harlem emcee Bodega Bamz.

Since releasing his debut mixtape Strictly 4 My P.A.P.I.Z. in 2012, Bamz has kept his momentum despite not dropping another project. Then again, when one has a project that’s featured A$AP Mob, Flatbush Zombies and Joell Ortiz among others, the quantity over quality excuse becomes non-existent. Taking the same approach three years later, he’s back with his first full length debut album Sidewalk Exec. Released Tuesday through Duck Down, Bamz’s slow bake approach should deliver the same results.

Speaking with DX, Bamz discusses maintaining relevance with a long wait between projects, his thoughts on New York Hip Hop and his relationship with A$AP Yams.

DX: Having a good day?

Bodega Bamz: Doing a lot of press man, running around. I love to be busy and spreading that good word out. I’m blessed, good day. A nigga album just came out. Getting shit prepared, I got a big show in my city and I haven’t performed there in two years. So niggas is waiting on me. I haven’t dropped a mixtape or album in over two-and-a-half years so mutha fuckas is waiting on me. They waiting on young don. I’m just excited man.

DX: What’s taken so long? Where have you been?

DX: How are you able to maintain relevance without putting out much work? Hip Hop fans are finicky now a days.

Bodega: Yeah, number one, I got a good core fanbase and good cult following so it helps. I stay afloat because I’m in the right circles. I stay afloat because the right muthafuckas respect me. The right muthafuckas doing their thing respect me. I’m able to stay afloat with touring, doing singles, features and bodying everything I do. It just speaks volume with what kind of artist we are. Our shit is so pure and our shit is so visionary, we can take time off my nigga. It’s about building and creating new shit to where people be waiting on us. We give our all to this shit, pure with it and we’re 100 percent with this so people respect that. I’m so fortunate to have fans when I take off to give yall beautiful timeless art. Niggas was waiting patiently. A lot of muthafuckas can’t do that. I dropped a mixtape in 2012 and it’s still buzzing in the streets. I’m still going on tour our here, still selling out shows out here and I only got one tape to show for it?  I’m blessed. Everything we do is strategic. We’re talented and I have the right people around me. That’s why niggas is waiting on it.

DX: Must be nice to have artists like French Montana to radio personalities including Angie Martinez and Peter Rosenberg talking about you right? Especially considering where New York Hip Hop is at right now.

Bodega Bamz: That shit is amazing to have the forefathers and the gatekeepers to fuck with you. If you’re from New York, you need that. You need that proper co-sign. New York loves me because I’m from New York. I’m New York’s child. In 2012 when we came into this muthafucka, New York was in a shitty place. It was stinking as far as talent wise as far as new music. The OGs and legends had their time and did their thing but niggaz want to see new faces. For a long time, New York was in the toilet. Came 2012 was A$AP Mob, Flatbush Zombies, Action Bronson and all these other people. We put that shit back on the muthafucking map. We went from the underground and took that to the mainstream. Now everyone is talking about New York again because you have this new crop of artists who are killing shit and doing it their way.

DX: Do you think that conversation puts unnecessary pressure on artists who want to make dope music without having anything to prove locally?

Bodega Bamz: Bringing New York back, you’re definitely going to have pressure but it’s also about how you handle it. It’s about remaining humble. It’s about being that person who rises above because it’s a lot of responsibility being a rapper in New York which is the birthplace of Hip Hop. It’s a huge responsibility because it was in the toilet for so many years and we brought it back. When the pressure comes, it’s about remaining humble and focused. It’s about not trying to compete with nobody. I don’t try to compete with nobody and most definitely anyone in New York because I rather compete with myself. Even when the pressure comes along, I know how to handle it. I can cook in the kitchen when it’s 300 degrees.

DX:  I saw the “Bring Em Out” video with you and Flatbush Zombies. Talk about your relationship with them for a moment.

Bodega Bamz: Well, that working relationship comes from A$AP Yams. I met Flatbush Zombies through A$AP Yams. A$AP Yams was a connector in New York. He put everybody together and was the curator. He was the type of guy who gave you a pat on the back when you needed one. I love my brother first and foremost. I miss him everyday. I met Flatbush Zombies through him at a video shoot and from then on, we clicked.  It’s been all love ever since. It started out as music but turned into a brotherhood. I appreciate those guys. I love those guys. They put money in my pocket, put me on tour and helped me provide for my family. They helped create opportunities. I love those mutha fuckas. They’re super talented and just happy to be apart of their history. I’m happy to do songs with them and do dope shit that people love. It just shows the unity of New York.  Two different acts from different areas of New York but can still work together.

DX: How did you make your way to meeting A$AP Yams?

Bodega Bamz: In 2011 right when Rocky was kicking off, A$AP Yams had DM’d me saying he was a huge fan of me and asked me if I needed anything. He’d pretty much said be there if I needed anything. I hit the nigga back and gave him my number. He called me, we spoke, a few more days after the initial conversation he came to my recording studio in Washington Heights and we clicked. It was just one of those relationships that was life changing. Not only on some musical level type shit but a personal level. Knowing that man and having that man in my call log. Being able to sit, call and eat with that man. I was blessed to have him in my corner. Having him in my corner was when everything started clicking with me. We met so simple through Twitter and since then, it’s flourished to what you see now. Yams gave me a vision on how to move. He gave me a plan, he gave me a blueprint. I just had the talent but, I didn’t have the plan.

DX: On a side note, did you guys really do shrooms in the video?

Bodega Bamz: [Laughter] I would say Erick Arc Elliott did.

DX: You released Sidewalk Exec this week. Must be relieving feeling right?

Bodega Bamz: It’s classical piece of art. Timeless music that I’m excited to be releasing for the people. I know people are going to cry when they hear it, laugh, get angry when they hear it, jump and crowd surf. It just tackles every emotion. It’s a great body of work with great storytelling and great beats. I’m very proud of that I put together and people are really going to hold it high. It’s my best work up to now. I’ve been working on it for three years. Like not three years extensively but since 2012, I’ve been working on it. It’s not an album that I did in four months. I’ve been making sure it sounded right and certain words sound right. Shout out to the album’s producer V’Don. We really did our thing with this shit.

DX: Is it difficult working on an album for three years in the forever changing soundscape of Hip Hop?

Bodega Bamz: Well what happened with me in three years, is that you have to step up your sound for what the moment calls for. I cut a whole bunch of records three years ago for Sidewalk Exec because of that and did brand new music. Because what you said, the soundscape changed and I’m more comfortable rapping now in terms of delivery and flow. Three years ago when I was working on records for Sidewalk Exec with V’Don, we canned 90 percent of those records and started with new tracks but the idea remains. Honestly, I’m not even going to say that the sound is up-to-date but it’s ahead of it’s time. I feel like Sidewalk Exec is ahead of the curb. I feel like everything you’re going to hear on the album is ahead of the curb.

DX: The project is being released through 100 Keep It and Duck Down Music. What makes Duck Down Music so important to New York Hip Hop. Seems like they were seen as almost a lifeline for a moment.

Bodega Bamz: Yeah, I mean the importance. This is an independent Hip Hop label that’s been around for twenty years which speaks volumes. A lot of times, independent labels come and then shut down after a few years. To have that kind of longevity speaks for itself. My personal opinion on them is that it’s been amazing. Just 100 percent believing in what I do; really supportive. I know I’m driving them crazy but I just want things to be perfect and making sure everything is A1. So we be on their ass but they never take it personal, they know what it’s like to be an artist and they know what it is. That’s what I respect about them, they never tell me to switch it up or do things like this. They just support what I do. They give me that freedom. I respect the opportunity Dru Ha, Noah and the Duck Down staff gave me. They’ve been awesome.

DX: Do you have a favorite album put out through Duck Down?

Bodega Bamz: I love Sean Price. Everything Sean Price has released there. I think he’s unbelievable. I definitely go with Sean Price.