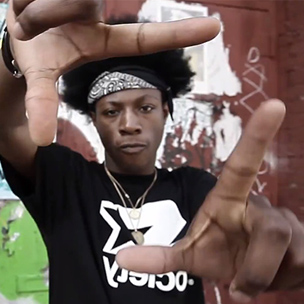 Who is Joey Bada$$—a child prodigy? The story of Joey Bada$$ normally starts with a video of a child rapper drawing people’s attention on the ‘net. Searches for “Jay Oh Vee” will return several videos of a younger Joey spitting bars. Regardless of which video drew people’s attention, fast forward to present time, and Joey Bada$$ has dropped two projects, 1999, and Summer Knights. The latter, critically holding its own among releases from Kanye West, J. Cole, Wale, Run the Jewels (Killer Mike and El-P) Mac Miller, and Jay Z. Joey constantly finds himself compared to the likes of Nas, however, he’s content to please an audience of one.

“I just write for myself,” Joey said. “It’s a lot of things that boost it, or keeps it moving, or charges it, that keeps me motivated, but that’s what it is most of the time. Pressure is like steam that burst; I just take it in and release it.”

So, again, who is Joey Bada$$? Is he the leader of the Pro Era movement? Joey is the front-man for the Pro Era crew, a collective of talented emcees and producers, hailing from Brooklyn New York. Late December, the Pro Era crew released Peep: The Aprocalypse. Unfortunately, days after its release, they would lose one of their most influential members, Capital Steez. While the untimely passing of Capital Steez has been felt across Hip Hop, the Pro Era crew has continued to represent for their fallen brethren. Joey’s Summer Knights featured the track “#LongLiveSteelo” in honor of Capital Steez.

After rocking the stage of Rock the Bells in the bay area alongside his PE brother Kirk Knight, HipHopDX had a conversation with Joey Bada$$, in the presence of frequent Pro Era producer, Statik Selektah, possibly giving more of a glimpse of who Joey Bada$$ truly is.

HipHopDX: You recently dropped Summer Knights. How do you feel about the reception you’ve been getting?

Joey Bada$$: I’m pretty content with the reception, because the exact amount of buzz it got is what I needed to take more time with that album.

DX: It was originally scheduled to be an EP, correct?

DX: Why the decision to make it full length?

Joey Bada$$: I feel like I owe it to the fans to throw a little more content out there.

DX: You dropped that right around the time everybody else was dropping their projects in late June. There was Yeezus, J. Cole, Mac Miller and everyone else. Where do you feel you stand in comparison to the rest of the game right now?

DX: Since you guys just killed the stage, what’s your favorite song to perform off that Summer Knights?

Joey Bada$$: I like “Sweet Dreams,” but definitely “95 till Infinity.”

DX: You’ve also got the song “Death of YOLO” on Summer Knights. Do you feel like sometimes the youth may not realize what they have and take it for granted?

DX: You got Collie Buddz on the project; how did you get that set up?

Joey Bada$$: Mutual respect. I reached out, and he was fucking with it.

DX: How do you feel about Summer Knights, in comparison to 1999?

Joey Bada$$: Well, 1999 is my firstborn, but you love all your children the same.

DX: We’ve heard that Chuck Strangers recently moved out to California, is that correct?

DX: Do you feel like that will affect the sound, with him being one of you guy’s main, in-house producers?

DX: So how do you feel the Pro Era project was received that dropped not too long ago?

DX: I’m gonna quote this bar; from another Brooklyn rapper, “I’m strong enough to carry Biggie Smalls on my back, and the whole BK, nigga holla back.” Do you feel like cats are really looking at you to hold up Brooklyn?

Joey Bada$$: Nah, ‘cause I want to hold up Brooklyn. I don’t see nobody else—or at least nobody in my category, in this new generation.

DX: But it is whole generation though, that’s the thing that’s dope. You got the Underachievers, you got Flatbush Zombies. What I hear out here is “New York hip hop is falling off,” but I don’t feel that way.

Joey Bada$$: You still hear that?

DX: I still hear that out here in California.

Joey Bada$$: That’s probably because…well, I don’t know why. Tell them open up their ears more.

DX: I think it’s because it’s not on the radio.

DX: I think it’s because there’s not a lot of stuff in the stores. When I look at Brooklyn right now, it reminds me a lot of what was happening in LA wth Pac Div, Blu and Exile and Fashawn, with all these cats right before Kendrick broke big. Do you think about that when you’re writing rhymes?

Joey Bada$$: I just write for myself. It’s a lot of things that boost it, or keeps it moving, or charges it, that keeps me motivated, but that’s what it is most of the time. Pressure is like steam that burst, I just take it in and release it.

DX: That’s the energy of Brooklyn though. That’s like the environment that used to be in Brooklyn, in certain neighborhoods.

DX: Used to, in certain neighborhoods…

Joey Bada$$: It’s not that much in the streets like it used to be and all that, but it’s still the right zone.

DX: With that, things are changing, but your sound is quintessential Brooklyn. When I think about Shipes, to put out an artist right now with a sound that is from the 90’s, or in homage of the 90s with a little flip on it. Everything is real turned up right now, but you’re not doing 180 beats per minute type joints.

DX: I just listened to your show.

Joey Bada$$: You don’t know what I’m working on in the studio.

[At this point, Statik Selektah, who has been sitting silently, interjects.]

Joey Bada$$: What you’re saying here is, you’re one of those interviewers who continue to pigeonhole me into this ‘90s era box. What it really is, is that the more you guys do that, the more people turn away from it, ‘cause they just easily perceive it as that. This is fresh new music. From 2012, 2011, and now 2013.

DX: So do you think about that when you work on your new music?

Joey Bada$$: I think about just making great music all the time.

Joey Bada$$: I’m not saying that it’s a negative aspect. I’m saying it’s what the media puts me out there as. When it’s just really all new music; it’s fresh.

Statik Selektah: Jay Z’s biggest record of his whole career is “Empire State of Mind.” That beat is a sample, and boom bap drums, and it’s the biggest song of his whole career. When he made that song, not one single person said, “So, why did you decide to make an old-school Hip Hop song?” Hip Hop is from New York; it’s built off samples, and it’s built off sample drums…that’s what it’s built off. The whole culture. Whether it’s off vinyl or whatever. All the music—it doesn’t matter if you’re doing Trap shit, or you’re doing…even Run DMC came from that. And they didn’t want to deal with all the looping the breaks and all that; that didn’t come until a little bit later as far as on record. It all came from looping a break beat. That’s what Hip Hop is from. We’re not talking about ‘90s, we’re not talking about ‘80s and we’re not talking about 2000’s. Hip Hop period is built off drums and samples…period. So if you’re one of those dudes out there that’s talking about, “I don’t sample, that shit is old school,” or “I don’t want to pay for the samples,” you’re just kind of a cancer to our culture. It doesn’t mean you always have to sample. It doesn’t mean any of that. I’m just saying if we can’t keep the balance, then you’re probably just the herb who got into Hip Hop in fucking college.