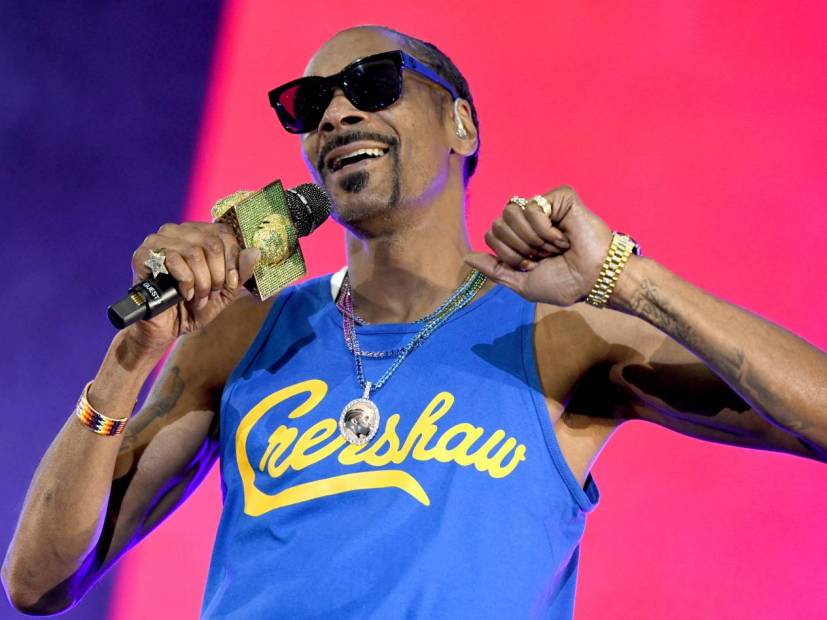 At a ceremony commemorating his star on the Hollywood Walk of Fame last November, Snoop Dogg concluded his speech with four simple words: “I wanna thank me.”

Over the last few years, Snoop has become a pop culture icon. He’s released a cookbook, starred in a TV show alongside Martha Stewart and started his own line of cannabis — to name just a few of his numerous projects. But simultaneously, he’s been devoted to his musical craft and has ventured into new genres like gospel and reggae. His upcoming 17th album, I Wanna Thank Me, is focused on his legacy as he enters his fourth decade in show business.

HipHopDX attended a listening party for the new album that saw Snoop in good spirits, holding court at his famous Inglewood compound. He answered a wide range of questions from the press and showcased the first part of an upcoming, highly personal documentary about his life that features stars such as Pharrell, Dr. Dre, Diddy and LA Philharmonic conductor Gustavo Dudamel.

Here are the five reasons to give Snoop’s I Wanna Thank Me the time of day.

1. There’s Something For Everyone

This is an eclectic project that checks off a lot of boxes. Want a Latin trap track? He’s teamed up with Ozuna. A sensual song? Snoop’s got you covered. Something to dance to at the club? Chris Brown and YG are here. As a follow-up to last year’s gospel album Bible of Love, it’s also a return to form for the “Gin & Juice” rapper; he resurrects the G-Funk sound (the late Nate Dogg shows up) and tropes of gangsta rap.

Impressively, the album never seems scattered or unfocused. Each song emulates a different style but with confidence and ease. He told DX during the recording process, he listened to a diversity of genres because contemporary rappers no longer inspire him, remarking, “I am not in your lane anymore.”

In regards to current artists he admires, he gave a shout out to R&B singer H.E.R.: “She puts me in the zone to make some music that says something because her music says something.”

2. This Isn’t Just About His Legacy — It’s About Hip Hop’s As Well

The “Drop It Like It’s Hot” facet of the legendary artist’s skill set has been a pivotal part of Hip Hop’s commercial climb. At the press conference, Snoop expressed his frustration with how mainstream culture still holds a stigma towards Hip Hop.

He said that although Hip Hop is “the only form of music that connects all walks of life” and that many musicians outside of the culture perpetually steal from the genre, older rappers are thrown in the dustbin of pop culture. With I Wanna Thank Me, Snoop wanted to celebrate the genre’s roots and raise awareness of its history.

Everything still wrong with #HipHop… Thank you for the perspective, @snoopdogg 🙏🏿🙏🏿#IWannaThankMe | #ItsAllHappening

Explaining his decision to include turntable sounds, he said it was “taking it back to the element of Hip Hop” where it was just a “DJ and an MC” and hoped to educate people about a Hip Hop that goes beyond current trends like Auto-Tune and monotonous drum patterns. Though I Wanna Thank Me’s title is boastful, the West Coast legend is focused on the bigger picture.

Anyone familiar with Hip Hop history can tell you Death Row Records has had its fair share of controversies and inner-feuds. It was only fairly recently when Snoop said he’s squashed his beef with the infamous Suge Knight. He brings up the drama on his new album, dedicating a song to Knight and the record label’s broader legacy.

At the listening party, Snoop explained his decision as a way of getting ahead of the petty gossip and lies and honoring not only truth, but also the nuances of a multi-decade relationship.

At 47, Snoop is feeling quite reflective and trying to complicate the media narrative of Knight as a public enemy. He discussed Death Row Legacy’s history as similarly complex.

“It wasn’t all bad; it was a beautiful ride — it just got bad when egos and money got involved,” he said. “As far as our friendship, our brotherhood, and or love, we always kept that.”

4. This Is Still Commercial Snoop

Over the course of his career, Tha Doggfather has proven himself to be a shapeshifter by keeping up with the evolving musical landscape.

When making I Wanna Thank Me, Snoop said he envisioned how the songs would sound on stage. Even as he gets more socially conscious in his lyrics and embraces a more soulful sound, he’s still keeping his ear to the ground of what’s trending and wants to continue to make the kind of bangers that made him famous.

Last April, Snoop gave an emotional speech at Nipsey Hussle’s memorial service. Following the L.A. rap star’s death, there was a rare moment of unity between the Crips and Bloods. That potential for mutual understanding is one of the numerous themes on Tha Doggfather’s 17th album.

Snoop explained to the press he hopes this could be a turning point in the culture.

“It’s just a matter of somebody being man enough to say ‘Enough is enough,'” he said. “Now’s the time I’m stepping forward and I am putting peace in the air. Hopefully, you guys will follow and lead by example.’”

I Wanna Thank Me will be available on August 16. A music video for the titular track can be seen below.